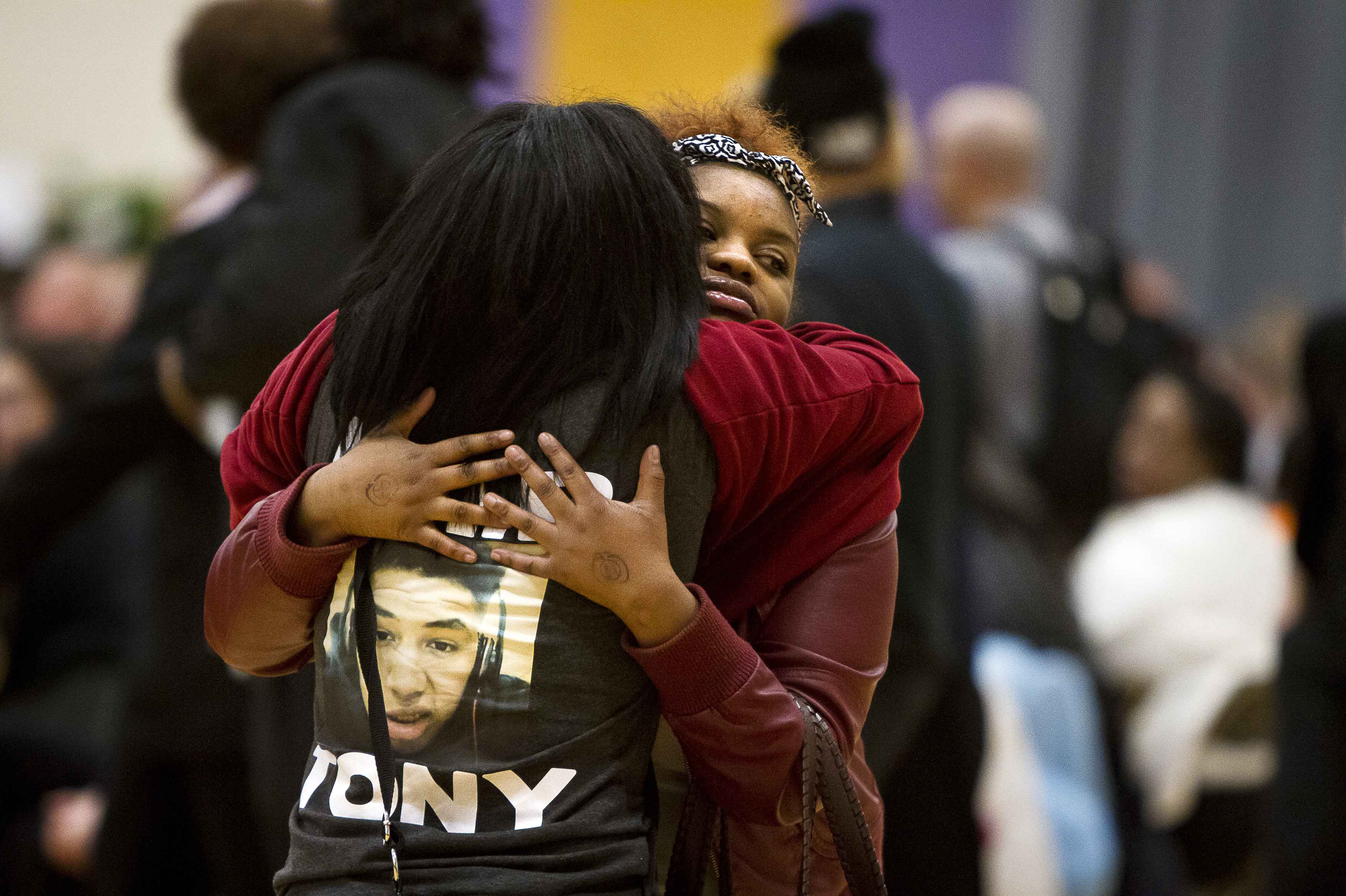 MADISON, Wis. -- Hundreds of mourners packed a Wisconsin high school field house and spilled into a secondary gym on Saturday to remember a 19-year-old biracial man fatally shot last weekend by a white officer, the latest of a string of killings by police nationwide that have stirred racial passions.

Tony Robinson, whose mother is white and father black, died March 6 after what Madison police said was a confrontation in which he assaulted the officer.

A preliminary autopsy showed Robinson was shot in his head, torso and right arm. Toxicology reports are still pending, according to CBS affiliate WISC-TV.

The autopsy did not say if he was facing or turned away from the officer, who was identified as a 45-year-old veteran of the force, Matt Kenny.

Under a new Wisconsin law that requires an outside agency to look into fatal police shootings, a state agency has stepped in to investigate.

So many people arrived for Robinson's visitation and funeral Saturday that the overflow was directed to a secondary gym. Slides of Robinson's life showed him as a child with his family, playing basketball and with high school friends.

A few mourners wore t-shirts saying "Black Lives Matter," the motto of a protest movement which grew after the Ferguson killing. People who brought signs to the funeral were politely told to put them away at the request of Robinson's family.

"While we appreciate the support in the form of peaceful protests, and justified anger about the manner in which his life was taken away from us too soon, this is not the venue to express that," the family said in a statement before the funeral.

"Tony is not a victim. He's our own martyr, a champion of change. And for you I will always stand," Robinson's aunt Lorien Carter said in a eulogy, WISC-TV reported. Carter also recited a poem for her sister, Robinson's mother, Andrea Irwin.

Elijah Carter struggled to talk about his friend, telling the crowd Robinson was like a brother to him and that his family was Carter's second family.

Craig Spaulding, whose son was one of Robinson's close friends, said adults in Madison now have a responsibility to take care of the community's youth.

Multiple people who spoke quoted Robinson as saying, "You ever have that feeling you're going to live forever? I'm going to change the world."

Robinson's grandfather Tyrone Henry urged kids in the audience to get an education and take action in Robinson's memory.

Johanna Valdez, a senior at Sun Prairie High School where Robinson graduated, said she used to play one-on-one basketball with him after school and remembered him as goofy and fun.

"He was always listening if you needed someone to talk to," Valdez said.

Police said they responded to a call last Friday night that Robinson was running in traffic on the street and had assaulted someone. According to police, Kenny heard a disturbance inside an apartment and pushed open the door, where he encountered the unarmed Robinson.

Robinson's death followed sometimes violent protests in Ferguson, Missouri after an unarmed black man was fatally shot there last August. This week, two policemen were injured by gunfire during one of the demonstrations, which have continued for months in front of the Ferguson Police Department.

While protests have been peaceful in Madison, they have highlighted local concerns. Only about seven percent of the 240,000 population are black and demonstrators have complained about unequal policing of poor, black neighborhoods.

Madison police have tried to be more conciliatory than their counterparts in Ferguson since the shooting. Police Chief Mike Koval rushed to the home of Robinson's family on the night of the killing and prayed with the man's grandmother in the driveway. He said he understands the community's anger and has emphasized the right of protesters to march peacefully.

"One day...I hope everybody in this room can respect that I don't want to be defined by this," Koval said Friday, during a forum organized by Madison's black churches. "We do a lot of good. For a lot of people. I hope at some point there can be some forgiveness. I desperately seek that."

But some people at the funeral said they thought the shooting was an overreaction by police.

"What I personally don't understand is why they have to resort to shooting first," Valdez said.