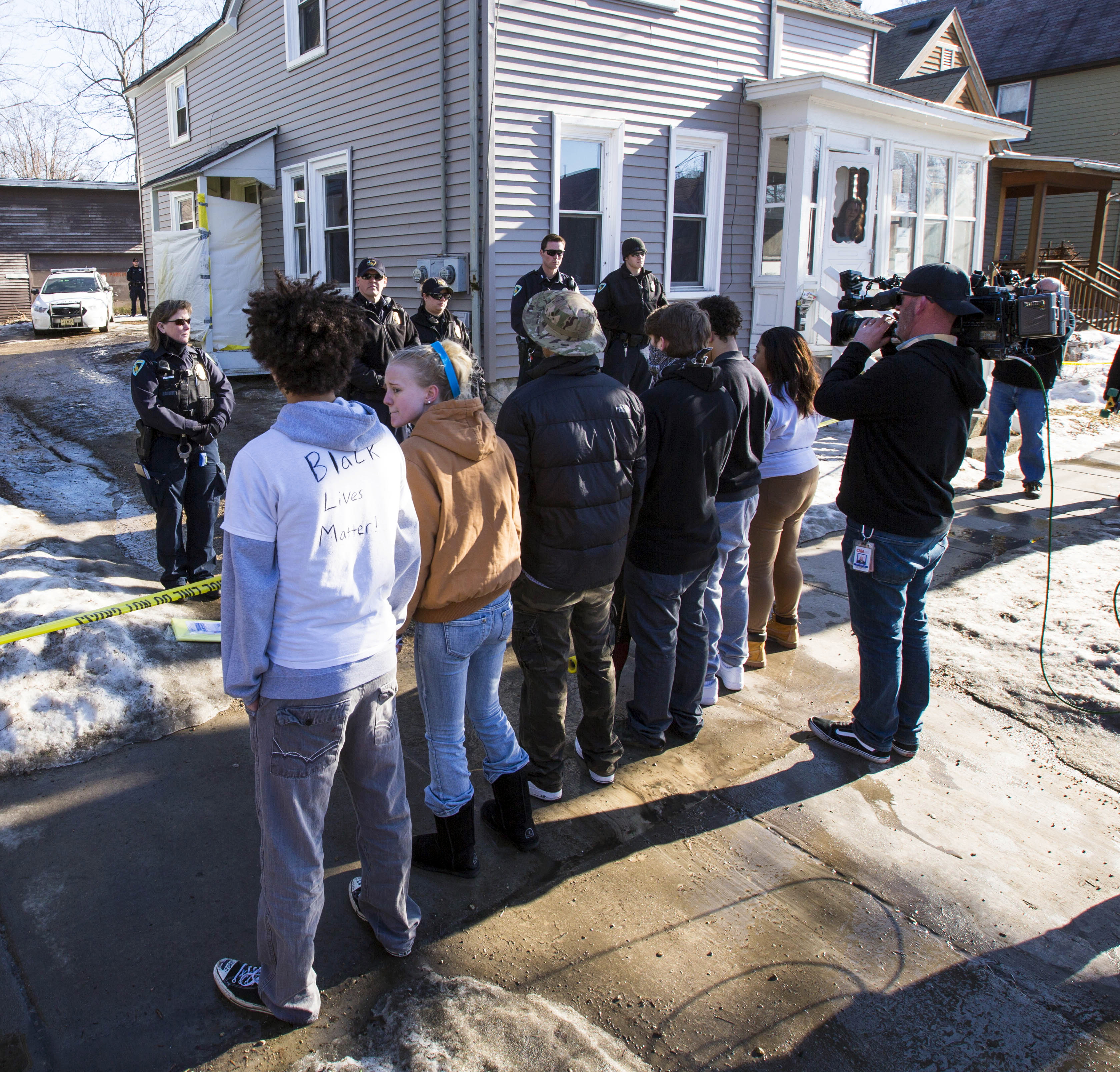 MADISON, Wis. -- The mother of a biracial 19-year-old killed by a white police officer urged hundreds of protesters who gathered Wednesday to keep their march as peaceful as other rallies have been in the wake of the shooting five days earlier.

"My son was never a violent man, and I don't want to see violence in his name," Andrea Irwin, Tony Robinson's mother, said to those gathered for a march that was to include a stop at the state Department of Corrections headquarters to protest black incarceration rates.

Demonstrators also planned to deliver demands to Gov. Scott Walker, but would not say where that was to happen.

A separate rally to show support for police drew dozens of people to a law enforcement memorial at the Capitol. Ron Torrisi of Madison held an American flag at the event.

"People think our police department is losing credibility and I think it's important for us just to be there to support them," he said. But Torrisi said he was optimistic that Madison would not see the violence that followed a similar shooting last year in Ferguson, Missouri.

Lori Schroedl, the wife of a Madison police officer, said she came to the rally because "everybody's lives matter."

"(Walker) talked about his own kids and said that he was grieving for the family and he also talked about empathy and our state showing empathy toward this family," said Boys and Girls Club of Dane County leader Michael Johnson, who met with the governor for about 30 minutes.

The governor's spokeswoman Laurel Patrick called the meeting with Johnson "positive and productive."

Robinson was unarmed when police officer Matt Kenny fatally shot him early Friday evening while investigating a call that the young man was jumping in and out of traffic and had assaulted someone. The officer heard a disturbance and forced his way into an apartment where Robinson had gone. Authorities said Kenny fired after Robinson assaulted him.

Protests since the shooting have been large and peaceful, with Robinson's family members saying they are not anti-police and organizers of rallies broadening their focus to include larger issues related to racial justice.

Madison city officials, most notably the mayor and police chief - who are both white - have been outspoken in supporting the rights of those upset over the shooting. Mayor Paul Soglin has repeatedly said that the unrest of Ferguson was not inevitable in Madison.

The biggest rally came Monday when about 1,500 people, many of them high school students, gathered peacefully over the noon hour filling the rotunda of the state Capitol. The Madison school district facilitated students' participation in the event, providing buses for anyone who wanted to take part.

Students were also invited to attend the Wednesday march to demand fully funded public schools, a living wage for every Wisconsin worker, and "systemic change so that communities of color can live free of mass incarceration and police violence."

That rally was in the works before the shooting, said organizer Jennifer Epps-Addison, director of the advocacy group Wisconsin Jobs Now. She expected about 1,000 people to attend.

The rallies come as the state Department of Criminal Investigation, a part of the Wisconsin Department of Justice, continues its independent review of the shooting as is required under state law whenever a police officer kills someone.

Robinson's funeral was planned for Saturday afternoon at a Madison high school. Johnson said $20,000 has been raised to pay for the funeral expenses.