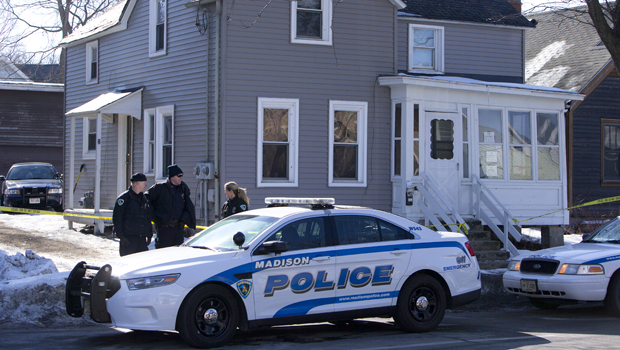 Police Chief Mike Koval said the man was shot Friday night after an altercation in which the officer was knocked down by a blow to the head. Koval did not know whether the man was armed, but said "initial findings at the scene did not reflect a gun or anything of that nature that would have been used by the subject." The officer's name, race and years of service has not been released.

Authorities also did not release the name of the victim, who died at a hospital. Michael Johnson, CEO of the Boys & Girls Club of Dane County, identified him as 19-year-old Tony Robinson, CBS Madison affiliate WISC-TV reports.

Several dozen gathered outside the Dane County Public Safety Building on Saturday before starting to walk toward the scene of the shooting, holding signs that read, "Black Lives Matter" - a slogan adopted by activists and protesters around the nation after recent officer-involved deaths of unarmed black men. Protesters also shouted the slogan Friday night after the shooting.

"My son has never been a violent person. And to die in such a violent, violent way, it baffles me," said Andrea Irwin, who told WKOW-TV on Friday night she is Robinson's mother.

The state Department of Justice's Division of Criminal Investigation is investigating the shooting under a 2014 Wisconsin law that requires police departments to have outside agencies probe officer-involved deaths. State Attorney General Brad Schimel said the department will not share details of the investigation until it is finished.

"We are resolved that the result of that investigation will be one in which the public can have confidence," he added.

Madison, about 80 miles west of Milwaukee, is the state capital and home to the University of Wisconsin's flagship campus. About 7 percent of the city's 243,000 residents are black.

Koval said police were called about 6:30 p.m. Friday because the man was jumping into traffic. A second call to police said the man was "responsible for a battery," Koval said.

The officer went to an apartment, which neighbors said was Robinson's, and forced his way inside after hearing a disturbance. Koval said the officer was assaulted by the 19-year-old and then fired at him. Koval said he believes more than one shot was fired.

Neighbors said Robinson's apartment is in a two-story gray house on the block of Williamson Street, known to many as Willy Street. Many walked to nearby restaurants and cafés on Saturday.

Grant Zimmerman said Robinson would run between his apartment and his roommate's mother's house across the street: "He runs back and forth across the street all the time, even in the middle of traffic."

Olga Ennis, a neighbor and family friend, said Robinson was well-liked. "He was a beautiful kid," Ennis said. "He wouldn't hurt a fly."

She said many in the community don't trust police officers. "We're afraid of the cops," she said. "Who do you call for help now?"

The shooting came days after the U.S. Justice Department cleared Darren Wilson, the white former Ferguson, Missouri, officer who shot Michael Brown, of federal civil rights charges in the death of the 18-year-old, who was black and unarmed. A second report found patterns of racial profiling, bigotry and profit-driven law enforcement and court practices in the St. Louis suburb.

Koval referenced recent officer-involved deaths across the nation, saying "it's understandable that the reaction at the scene and of some of our citizens is extremely volatile, emotional and upsetting."

Mayor Paul Soglin called it "a tragedy beyond description," according to the Wisconsin State Journal.

"I expect there will be a lot of anger and frustrations, particularly from friends," Soglin said. "I hope as the pain eases that something constructive will come of this."

Sharon Irwin, who told the newspaper Friday night she was Robinson's grandmother, urged protesters to be peaceful.

"I think you need to rise up but I don't want violence," she said.

Messages were left with Robinson's mother and the Madison police department.