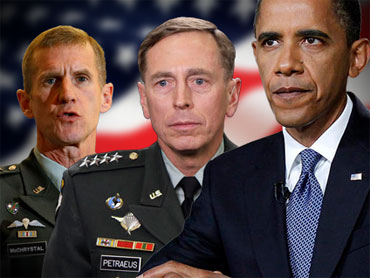 Speaking in the Rose Garden, Mr. Obama said that he accepted McChrystal's resignation "with considerable regret but also with certainty that it is the right thing for our mission in Afghanistan."

He said McChrystal's biting comments about the president and other officials in a magazine article did not meet the standards of conduct for a commanding general.

Obama hit several gracious notes about McChrystal and his service, saying that he made the decision to sack him "with considerable regret." And yet, said he said that the job in Afghanistan cannot be done now under McChrystal's leadership, asserting that the critical remarks from the general and his inner circle in the Rolling Stone magazine article displayed conduct that doesn't live up to the necessary standards for a command-level officer.

"War is bigger than any one man or woman, whether a private, a general or a president. And as difficult as it is to lose General McChrystal, I believe that it is the right decision for our national security," Mr. Obama said. "It is my duty to ensure that no diversion complicates the vital mission that they are carrying out."

With the McChrystal controversy refueling debate over his Afghanistan policy, Obama took pains to emphasize that the strategy was not shifting with McChrystal's outster.

Hotsheet: In Afghanistan, a New General but an Old Strategy

He said his decision was "not based on any difference in policy" nor "any sense of personal insult," but was made in the best interest of that mission.

By pairing the decision on McChrystal's departure with the name of his replacement, Obama is seeking to move on as quickly as possible from the firestorm.

Appointing Petraeus, Mr. Obama said, will "allow us to maintain the momentum and leadership that we need to succeed." He added, "This is a change in personnel, but it is not a change in policy."

Petraeus, a military leader popular with both parties and credited with turning around the U.S. effort in Iraq, is expected to have no trouble winning Senate confirmation to replace McChrystal as the commander of International Security Assistance Force and lead U.S. forces in Afghanistan. Petraeus currently oversees the wars in both Afghanistan and Iraq as head of U.S. Central Command.

"I'm extraordinarily grateful that [Petraeus] has agreed to serve in this new capacity," Mr. Obama said Wednesday. "It should be clear to everybody he does so at great personal sacrifice to himself and to his family. And he is setting an extraordinary example of service and patriotism by assuming this difficult post."

Sen. John Kerry echoed the president's praise for Petraeus saying, " His decision to return General Petraeus to the battlefield provides not just continuity in philosophy, but tested diplomatic skill."

Obama seemed to suggest that McChrystal's military career is over, including in his praise of the general that the nation should be grateful "for his remarkable career in uniform."

McChrystal left the White House following his Oval Office call to accounts, and returned to his military quarters at Washington's Fort McNair. A senior military official said there is no immediate decision about whether he would retire from the Army, which has been his entire career. The official spoke on condition of anonymity because he was not authorized to speak publicly.

In a statement released Wednesday night from NATO headquarters in Kabul, McChrystal said he remains deeply committed to the coalition forces, partner nations and the Afghan people and tendered his resignation out of a "desire to see the mission succeed."

"This is a huge moment in the war," said CBS News national security correspondent David Martin. "What the president has done here is showed that he cares enough about Afghanistan to send the very best."

Mr. Obama plucked Petraeus from a role above McChrystal's and sent him back to Afghanistan because he is the one who can hit the ground running and has the gravitas to demonstrate to the rest of the world that the United States is "not blinking" on Afghanistan Martin said.

Calm and introspective in public, if a bit brusque, the lanky four-star general, 55, has never been one to suffer fools gladly. But challenging the president and his team was another matter.

Watch a clip from President Obama's comments at the White House:

Watch CBS News Videos Online
In the Rolling Stone article, McChrystal said that he was "disappointed" after first meeting the president, made glib remarks about Vice President Joe Biden's counterinsurgency strategy, and derided other top officials.

People who know McChrystal say his comments in the Rolling Stone story, which is filled with scorching assessments of the commander's colleagues in the administration, were grave errors in judgment brought on by the stresses of a difficult war and complicated by the general's undisciplined staff.

McChrystal wasn't trained to maneuver inside the Washington political machine. He spent most of his long military career in the dark world of special operations, including five years as head of Joint Special Operations Command at Fort Bragg in North Carolina.

Last week, there was concern about Petraeus when he slumped at the witness table while testifying at a Senate hearing about the war in Afghanistan. He recovered quickly and a spokesman said the general likely was dehydrated and jet-lagged from his travels.