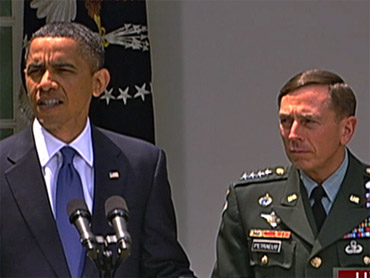 President Barack Obama has picked U.S. Army Gen. David Petraeus to take over the war in Afghanistan, after firing Gen. Stanley McChrystal for caustic comments about his civilian colleagues that bordered on insubordination.

Petraeus, who was McChrystal's boss as head of U.S. Central Command, is among the few seasoned war generals believed to be able to step into the job without disrupting the U.S. war effort.

In his current role role, Petraeus oversees military operations across the Middle East and managed both the war in Iraq and Afghanistan.

The shakeup comes as the American public questions whether the war can be won, and if it is worth fighting.

A White House official says Petraeus steps down as head of of CentCom in order to head U.S. forces in Afghanistan.