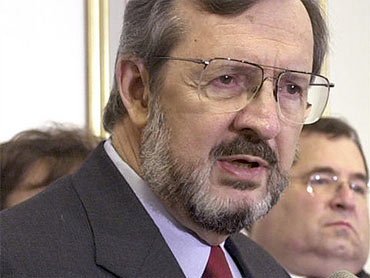 Dave Obey, the Chairman of the House Appropriations Committee, has released a scathing statement calling for the removal of General Stanley McChrystal from command in Afghanistan in the wake of an incendiary Rolling Stone article in which McChrystal and his aides criticize the president and other members of the Obama administration.

"In recent history - which runs from General MacArthur, to General LeMay, to General McChrystal, we have seen a long list of reckless, renegade generals who haven't seemed to understand that their role is to implement policy, not design it," Obey says. "General McChrystal's comments are not the first time we've seen a General contemptuous of his civilian superiors. It isn't even the first time we've seen this General be contemptuous."

"But his comments, and those of his subordinates, dismissing the President, the Vice-President, General Jones, Ambassador Eikenberry, and Richard Holbrooke suggests that General McChrystal is locked into an 'everybody is wrong but me' approach to the world.

"When criticizing his civilian counterparts, McChrystal himself said, 'Here's one that covers his flank for the history books.' Pardon me, but I wonder if that doesn't summarize General McChrystal's approach here.

"If he actually said half of what is being reported, he shouldn't be in the position he is in.

"In apologizing this morning, McChrystal said his comments were "a mistake reflecting poor judgment and should never have happened." I couldn't have said it better myself.

"Anybody, including a U.S. Army General, is entitled to making a damn fool of themselves once. But General McChrystal hasn't appeared to learn from his mistakes.

"In London last October, he made a deliberate determination to try to box in the President, and the President was generous to give him another chance to prove that he understood the chain of command.

"His repeated contempt for the civilian chain of command demonstrates a bull headed refusal to take other people's judgments into consideration. That is damn dangerous in somebody whose decisions determine life and death for American troops and others in the region.

"That is something that we simply cannot afford!"

As Chairman of the House Appropriations Committee, Obey to some extent holds the purse strings on Afghanistan war funding. He is responsible for shepherding through the president's request for emergency funding in Afghanistan. Defense Secretary Robert Gates wants that funding by July 4th.