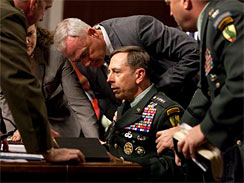 Gen. David Petraeus slumped over Tuesday morning during a Senate hearing but revived after a few seconds and left the room under his own power.

Petraeus, 57, had finished telling Sen. John McCain that he thinks the planned 2011 drawdown of U.S. troops remains on track, and McCain was responding when the room fell silent and aides began crowding around the four-star general.

He returned 25 minutes later sipping liquid and joking. He said, "[I was] a little bit light headed there. It wasn't Senator McCain's questions, I assure you."

Petraeus said he was ready to continue but the hearing was adjourned until Wednesday.

"I just got dehydrated, I think, and felt a little bit faint," said Petraeus.

Concern for Petraeus temporarily overshadowed fundamental concerns about whether the military can succeed in Afghanistan in the time the president has given them, reports CBS News National Security Correspondent David Martin.

CBS News producer Christina Ruffini reports that Petraeus told reporters after the hearing that he is feeling fine now. He said he just got a little dehydrated after not having breakfast.

In his lengthy appearances before the Senate and House armed services committees in September 2007 to testify on Iraq, he was reported to have endured great back pain and got through it with the help of Motrin.

Petraeus is the commander of U.S. Central Command. He was testifying on the war in Afghanistan.

As the most popular and widely known general of his generation, Petraeus is approaching a new juncture in a career that catapulted him to fame when President George W. Bush sent him to Baghdad in early 2007 to carry out a long-shot "surge" strategy that arguably rescued Iraq from collapse.

The general has had a high-profile career, and many believe he is the leading candidate to become the next chairman of the Joint Chiefs of Staff. He commanded all forces in Iraq under President George W. Bush.