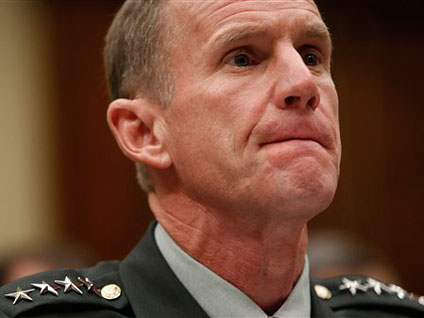 Meanwhile, CBS News has confirmed that McChrystal planned to offer a letter of resignation to President Obama ahead of a face-to-face meeting between the president and general tomorrow in Washington.

As a military man, McChrystal would pro forma give his boss the choice of accepting or declining his resignation.The president still has to decide whether to accept it.

Gibbs said Mr. Obama has not made any decisions on whether to remove McChrystal, the top U.S. commander in Afghanistan, in the wake of an incendiary Rolling Stone article in which McChrystal and his aides are quoted criticizing Mr. Obama and many other members of the administration.

He indicated the White House will have more to say following the meeting tomorrow.

Still, Gibbs made clear that the White House was extremely unhappy with McChrystal, the engineer of the American war strategy in Afghanistan. Gibbs said Mr. Obama was "angry" about the comments in the article and that McChrystal made an "enormous mistake in judgment." He also -- pointedly -- declined to say McChrystal's job is safe.

In the article, McChrystal complains that at an early meeting the president was unprepared; Gibbs quipped at the briefing that the general will have the president's "undivided attention" at the meeting tomorrow.

The press secretary added that "the magnitude and greatness of the mistake here are profound" and amounted to "distractions" to the war effort.

At the meeting tomorrow, Gibbs said, McChrystal will be asked to tell the president and top officials, many of whom came under criticism from the general and his aides in the story, "what in the world he was thinking."

Gibbs told reporters that Mr. Obama -- who as the commander-in-chief could plausibly cite the general for insubordination  -- has not yet spoken to McChrystal about the article. A senior military official in Afghanistan told The Associated Press McChrystal has been no indication as to whether he will keep his job.

Top House Democrat David Obey has called for the "dangerous" McChrystal to be removed, while Senators John McCain (R-Ariz.), Joe Lieberman (I-Conn.), and Lindsey Graham have called McChrystal's comments "inappropriate"and said the president should make a decision about his future.

McChrystal has apologized for the story, in which he expresses concerns about President Obama, appears to mock Vice President Joe Biden and is described by an aide as seeing Richard C. Holbrooke, Obama's senior envoy to Afghanistan and Pakistan, as a "wounded animal." In the story, McChrystal's aides are quoted calling national security adviser James L. Jones a "clown" who remains "stuck in 1985" and mocking other officials.

Michael Hastings, the author of the profile, said in an interview on the network Tuesday afternoon that "it was all very clear it was on the record."

Hastings said he was "completely taken aback" by some of the strong comments offered about members of the administration by McChrystal and his staff.

"I suspected it, obviously, that there were tensions there," he said. "But the candor in which they were delivered from the minute I arrived in Paris was extraordinary."