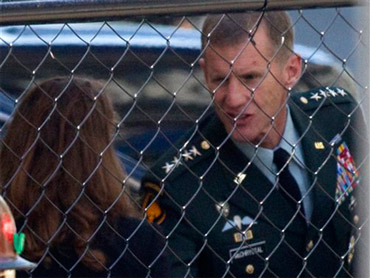 Afghanistan war commander Gen. Stanley McChrystal has completed a closed-door meeting with President Barack Obama and has left the White House. There was no immediate word on whether Obama would fire him for inflammatory comments that he and his aides made in a according to NBC News.

Aides to McChrystal told CBS News correspondent David Martin that McChrystal wants to keep his job because he can't stomach the thought of abandoning the mission in mid race.

Whether or not he loses his command he has already lost something just as valuable to him - his reputation as a good soldier. Inside the military, there is nothing unusual about exasperation with civilian leadership, which always has larger objectives than the battle in front of them, but displaying contempt runs counter to everything an officer is taught from the day he shows up at West Point, Martin reported.

Before the meeting, two military officials told the Associated Press that McChrystal went in "prepared" to submit his resignation. They spoke on condition of anonymity because they were not authorized to speak publicly.

McChrystal apologized Tuesday for using "poor judgment" in interviews for the profile, which paints him as deeply disconnected and displeased with the Obama administration.

At White House briefing Tuesday, press secretary Robert Gibbs told CBS News correspondent Chip Reid that "all options are on the table" regarding McChrystal's future. Gibbs said Mr. Obama was "angry" about the McChrystal's conduct in the article.

At least one top lawmaker, House Appropriations Committee chairman David Obey, has called for McChrystal's ouster, saying, "If he actually said half of what is being reported, he shouldn't be in the position he is in."

But most stakeholders have stressed that it is up to Mr. Obama alone to decide decide McChrystal's future.

Afghan President Hamid Karzai reiterated his backing of McChrystal Wednesday, calling him the "best commander" of the war despite the inappropriate comments.

While Obama's relationship with Karzai has sometimes been rocky, McChrystal has cultivated the Afghan leader, encouraging him to visit remote areas of the country and assume responsibility for military operations against the Taliban.

Asked what would happen if McChrystal were replaced, Karzai spokesman Waheed Omar said: "Of course, we hope that that does not happen."

Calm and introspective in public, if a bit brusque, the lanky four-star general, 55, has never been one to suffer fools gladly. But challenging the president and his team is another matter.

People who know McChrystal say his comments in the Rolling Stone story, which is filled with scorching assessments of the commander's colleagues in the administration, were grave errors in judgment brought on by the stresses of a difficult war and complicated by the general's undisciplined staff.

McChrystal wasn't trained to maneuver inside the Washington political machine. He spent most of his long military career in the dark world of special operations, including five years as head of Joint Special Operations Command at Fort Bragg in North Carolina.