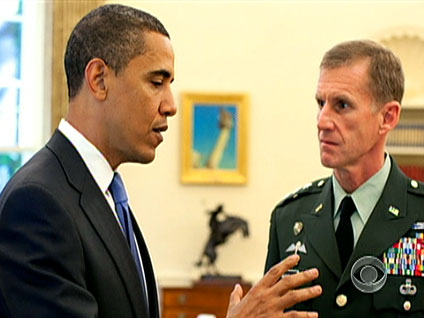 Aides to Gen. Stanley McChrystal say he wants to keep his job because he can't stomach the thought of abandoning the mission in mid race.

He met with Defense Secretary Gates and Chairman of the Joint Chiefs Mike Mullen this morning for 30 minutes and is waiting to be summoned to the White House. We won't know his fate for a few more hours, but whether or not he loses his command he has already lost something just as valuable to him - his reputation as a good soldier.

Inside the military, there is nothing unusual about exasperation with civilian leadership, which always has larger objectives than the battle in front of them, but displaying contempt runs counter to everything an officer is taught from the day he shows up at West Point.

No matter what happens, McChrystal will always be remembered for the Rolling Stone article the same way Monica Lewinsky will always be attached to Bill Clinton. Aides are still struggling to understand how he and his closest advisors could have been so indiscrete and disrespectful in the presence of a journalist.

Their only explanation is that they were grounded in Paris by ash from the volcano and let their game faces down. "We left the playing field and went into the locker room," one of them said.