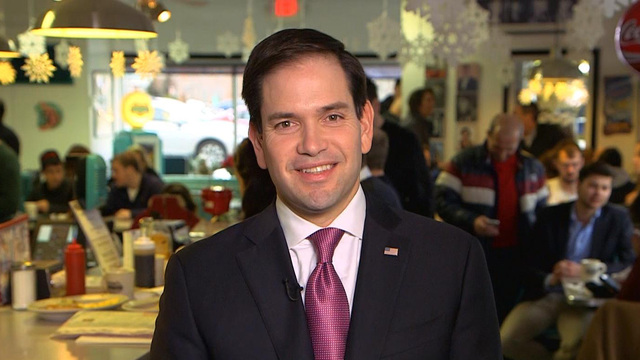 Refusing to cede any ground to the critics who say he choked during Saturday's Republican debate, Marco Rubio said he's happy with how things went.

"I feel great about it," the Rubio said on "CBS This Morning" Monday. "Voters across the country and especially here in New Hampshire got to hear me say repeatedly the truth--that Barack Obama is trying to redefine the role of government in our country and America's role in the world."

Rubio's repetition of the same talking point about President Obama four times during the debate - including three times within five minutes - earned him scorn from fellow candidate New Jersey Gov. Chris Christie, who said he was merely repeating a "memorized 25-second speech that is exactly what his advisors gave him."

Rubio first began using the sound bite - that the president does know what he is doing and he is trying to make America like the rest of the world - when he was defending himself against the charge that he is not ready for the presidency because he has only been a senator for one term.

And he's not planning on shelving that line of attack against Mr. Obama anytime soon.

"The core of this campaign is that statement and I am going to continue to say it. Barack Obama is deliberately carrying out a strategy to change America. He wants to redefine this country. It is one of the main reasons why I'm running and it's one of the reasons why I feel so good about our debate performance despite whatever the media people want to say," Rubio said. He added it was his campaign's biggest fundraising night among all the debates.

He's also confident that his campaign is ready for the long haul, although he isn't making any promises about when he'll win a primary election. Rubio had a surprisingly strong third-place finish in the Iowa caucus but recent polls show him struggling to break away from the pack of Republican candidates with similar policy views who have doubled down on New Hampshire, like Ohio Gov. John Kasich and former Florida Gov. Jeb Bush.

"Our goal is to have the largest number of delegates over a majority of them. That's what makes you the nominee," he said. "We picked up seven of them in Iowa, the winner only has eight so we're about a delegate behind there. We're going to do well here in New Hampshire, we're gonna move onto South Carolina, and when this process finishes in what is a very unusual election cycle, I feel very good about our chances to be the nominee. In fact, I expect to be the nominee."

A super PAC backing Rubio recently sent out a mailer that depicts Bush in a crown alongside the queen of England (who looks somewhat like his mother, former first lady Barbara Bush.) The flyer also quotes from a 2013 interview on NBC where Barbara Bush said, "We've had enough Bushes." She was predicting, incorrectly, that her other son would not run for the presidency.

Rubio declined to weigh in on the mailer because it wasn't sent by his super PAC but seemed to suggest it was fair game because "we've had close to $35 million in attack ads run against me."

Then he added, "I have tremendous respect for the Bush family. I have respect for Jeb. No matter, you know, what happens in this campaign, I'll continue to have admiration, respect and affection for him. But this election's not about him, about his family. It's about America."