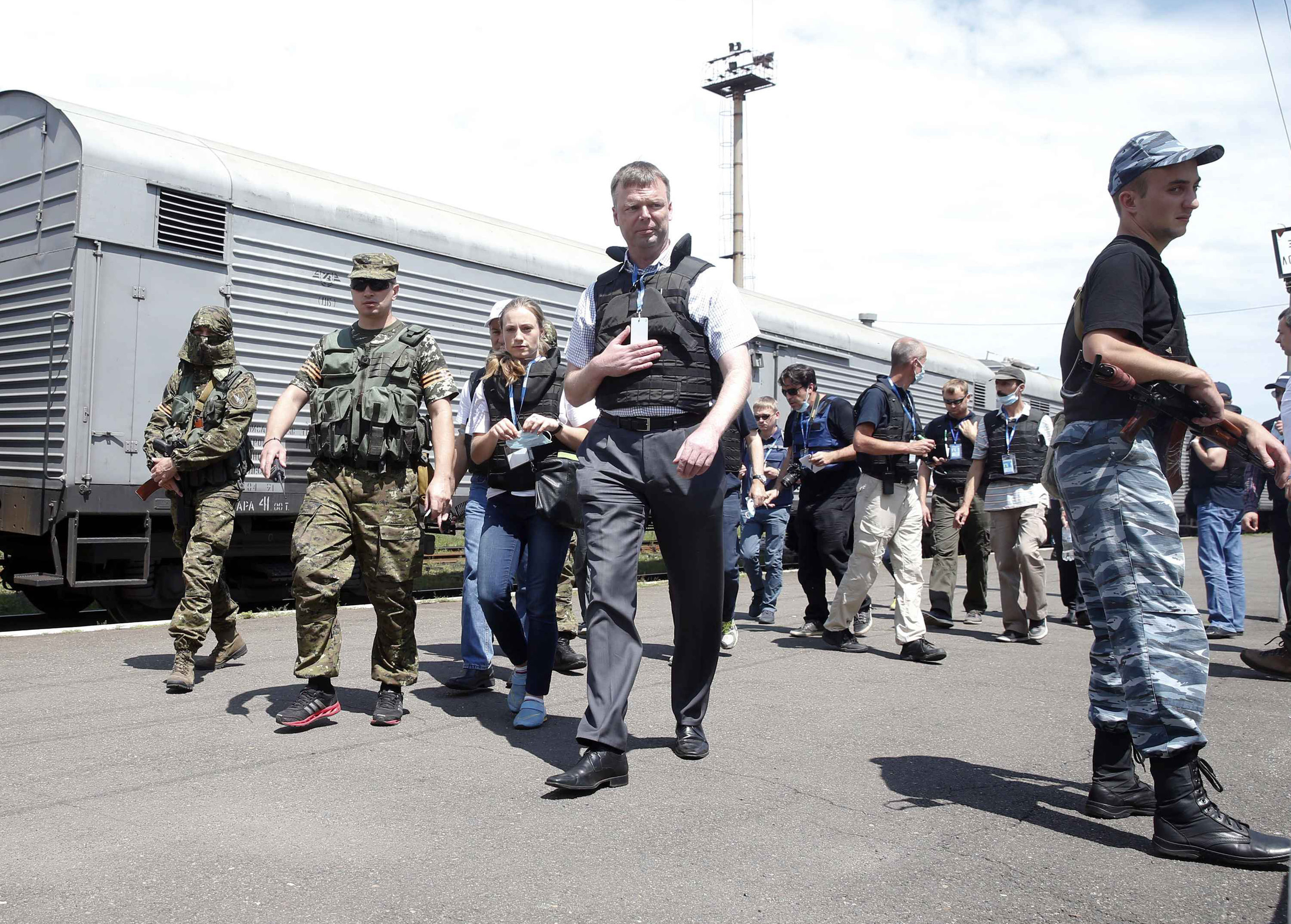 GRABOVO, Ukraine -- International investigators were still waiting Monday for full access to the 42-square-mile area where the shattered pieces of Malaysia Airlines Flight 17 and its passengers and crew fell to the ground in eastern Ukraine.

Inhibiting their access were the pro-Russian separatists who control the territory, and -- in a twist of fate only an ongoing war could deliver -- also happen to be the prime suspects in the missile launch which brought the Boeing 777 carrying 298 people down.

As CBS News correspondent Mark Phillips reports, the proverbial foxes have been left in charge of guarding the hen house. Video shot Sunday appeared to show rebel fighters in possession of the plane's two "black boxes," or flight data recorders, which could provide some insight into the last moments of the journey and what exactly brought it to such a dramatic end.

Highlighting the fight at the root of the tragedy, rebel leaders told the Reuters news agency on Monday that Ukrainian military tanks were trying to penetrate the opposition-held city of Dontesk, about 50 miles west of the vast crash site.

The commander in charge of Ukrainian military operations in the nation's east, Vladyslav Seleznyov, said only that an "active phase of the anti-terrorist operation is continuing. We are not about to announce any troop movements."

There were reports of intense fighting around the city's train station, and possibly at the airport.

At least 272 bodies from flight 17 had been found scattered across the farmland and small towns that dot the region, the Ukrainian Prime Minister said Monday morning. Of those, 251 had been loaded onto refrigerated cars on a train sitting in the town of Torez.

Other bodies, found by local rescuers -- or locals tampering with the evidence of the world's largest crime scene, depending on your perspective -- were piled by the side of a road Monday morning in the nearby town of Hrabove.

At a news conference Monday, Ukrainian Deputy Prime Minister Volodymyr Groysman said all the victims from the crash site have been put into refrigerated wagons and will be taken by train to the eastern Ukrainian city of Kharkiv, Reuters reports. Then, he said, all the bodies eventually will be taken to the Netherlands.

Pro-Russian militias -- considered by the U.S. government and much of the world to be the prime suspects in the missile attack which downed flight 17 -- remained in full control of the area, and they denied observers from the Organization for Security and Cooperation in Europe (OSCE) the full, unfettered access to the site they were promised over the weekend.

On Monday, a small team of about 11 Dutch forensic experts was able to reach the desolate train station in Torez, but it remained unclear whether rebel fighters securing the site had granted them the level of access to the victims' remains they required. The investigators said they had convinced the rebels to allow the train to leave Torez later Monday, and they were sealing the cars ahead of that departure.

Meanwhile, a Dutch military C-130 transport plane arrived Monday in the government-held city of Kharkiv carrying a much larger team of international investigators.

Negotiations were underway with rebel commanders to establish a safe corridor between the crash site and the government controlled city of Kharkiv, where Yatsenyuk said investigators were trying to set up a base from which to lead the probe into the crash.

CBS News producer Erin Lyall said that by car -- and depending on the number of checkpoints along the road and the mood of the fighters manning them -- Kharkiv is about a six-hour drive from Donetsk, with the crash area being slightly further to the east.

Yatsenyuk, the Ukrainian prime minister, said Monday morning that Ukraine was happy to let its partners in the west conduct the investigation into the downing of the passenger plane, with the Netherlands possibly taking the lead. More than half of the passengers killed on the flight were Dutch, and anger was building quickly in the Netherlands as family members demanded their loved ones' remains be returned.

He also said he had no doubt the Malaysia Airlines Boeing 777 was shot down, most likely by a "Buk-M1," or SA-11 as it is known in the west, missile system operated by what Yatsenyuk said were "professionals."

Pressure has mounted quickly on President Vladimir Putin to enable the painstaking work of a real forensic investigation to begin, but it remains unclear how much influence the Russian leader actually has over the rebel groups in the Donetsk region.

On Sunday, U.S. Secretary of State John Kerry said there was an "enormous amount of evidence" that Russia had provided the separatists in eastern Ukraine with the weapon used to shoot down flight 17.

In an interview on CBS' "Face the Nation," Kerry said the investigation of the crash would draw "definitive" conclusions about Russia's role.

"What we have is a lot of evidence that points in the direction, that raises very, very serious questions, including the fact that a few weeks ago, we have a 150-vehicle convoy coming from Russia, going into the east of Ukraine with tanks, artillery, multiple rocket launchers, armored personnel carriers, turned over to the separatists," Kerry said.

Putin has rejected that criticism, accusing the Ukrainian government and its western allies of exploiting the global tragedy for "mercenary objectives."

He said Monday that Russia was doing all it could to try and get a team from the United Nations' aviation agency access to the scene, but he also reiterated previous statements in which he blamed Ukraine's government for creating the circumstances in the east that allowed the launch of the missile to happen.

"We can say with confidence that if fighting in eastern Ukraine had not been renewed on June 28, this tragedy would not have happened," he said. "Nobody should or does have a right to use this tragedy for such mercenary objectives."