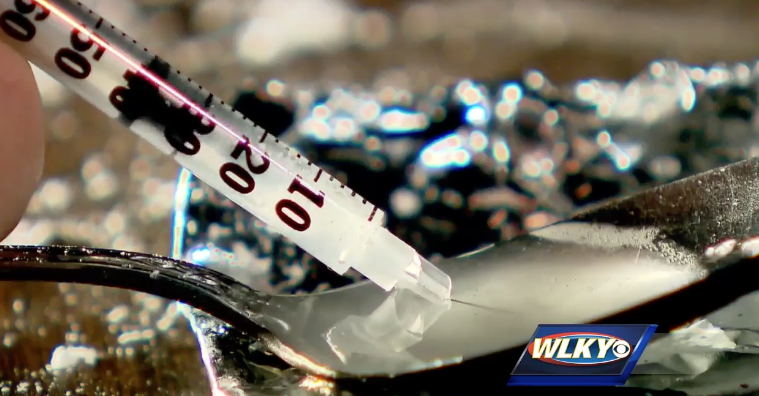 In a record spike, emergency crews in Louisville, Kentucky responded to 52 overdose calls within a 32-hour period last week. On Monday, dozens of people received free training on how to administer naloxone, a drug used to counter the effects of opioids like heroin, CBS affiliate WLKY reports.

“Everything happens for a reason, and I’m thankful it did happen, because I have a new look-out on life,” said Nathan Johnson, who said a recent overdose has him ready to stay clean.

“I got what I thought was heroin, I went in the bathroom, and dude told me it was strong, so I did just a tiny bit of it and they found me in the bathroom against the door with the needle in my arm,” said Johnson.

He isn’t alone. Louisville health officials said the record spike in overdoses last week is likely because of the synthetic opioid fentanyl, which is much more powerful.

“What we’re seeing in the streets right now is fentanyl mixed with heroin, as opposed to heroin mixed with fentanyl,” Russ Read, co-founder of Kentucky Harm Reduction Coalition, told WLKY.

During Monday’s training, attendees learned how to determine if someone has overdosed. Then they learned how to help them by calling 911, providing rescue breathing, and administering naloxone.

“They threw me in the shower, they did 18 minutes of CPR before the cops got there. Nothing was working, so the cop came in and he had to use two Narcans. It brought me back to life,” said Johnson. He can now use naloxone — or Narcan — on others. Kentucky’s ‘Good Samaritan’ law protects people who are administering the drug in an effort to keep someone alive.

Another free naloxone training session is set for Friday, Feb. 24 at the Louisville Department of Public Health and Wellness.