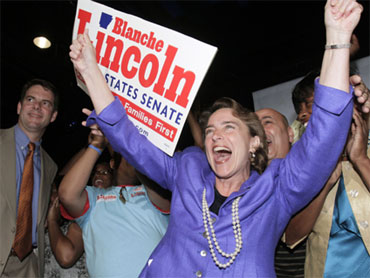 Embattled Democratic Sen. Blanche Lincoln won her quest for nomination to a new term Tuesday night, narrowly defeating a labor-backed rival as well as an anti-establishment tide in an Arkansas runoff. A second incumbent, Republican Rep. Bob Inglis of South Carolina, trailed his primary rival badly and limped into a runoff.

In another South Carolina race, state Rep. Nikki Haley ran far ahead of her rivals in the Republican gubernatorial primary but fell short of the majority needed to win the nomination outright. She will face Rep. Gresham Barrett in a June 22 runoff.

With polls showing a sullen electorate, there was no shortage of subplots as voters in nearly a dozen states chose candidates for Congress and governors' offices. Californians decided whether to lead the fall GOP ticket with a pair of wealthy businesswomen campaigning on promises to cut spending. Tea party activists tested their muscle in Nevada, backing Sharron Angle in a race to select a Republican opponent against Senate Majority Leader Harry Reid in a state where unemployment was 13.7 percent in April.

In Arkansas, Lincoln had 51 percent of the vote with ballots counted from nearly two-thirds of the state's precincts, to 49 percent for Lt. Gov. Bill Halter.

Labor played a key role in the Arkansas race, reports CBSNews.com's Brian Montopoli, pouring money into Halter's campaign in large part to send the message that it is willing and able to punish Democrats for apparent betrayals. Lincoln garnered labor's ire by reversing herself and opposing so-called "card check" legislation that would have made it easier to form unions, prompting criticism that she is too close to business interests.

"As of Tuesday morning, her top consultants were privately predicting a loss," says CBS News chief political consultant Mark Ambinder. "But Lincoln closed stronger than she thought. A last-minute campaign visit from Bill Clinton, along with radio ads from President Obama, energized the African American vote in key precincts. Across the state, Lincoln did better in almost every county compared to her performance in last month's go-round.

"Inevitably, the $10 million that labor unions spent to teach Lincoln a lesson will be seen as wasted money by Democrats in Washington, who wonder whether the expenditures were worth it," predicts Ambinder.

In South Carolina, Inglis' opponent, Trey Gowdy, was ahead handsomely in their GOP primary race, but he was shy of the majority needed to avoid a runoff in two weeks.

In South Carolina's Republican gubernatorial primary, Haley had 49 percent of the vote with returns counted from nearly all precincts. Barrett trailed with 22 percent.

It was an eventful campaign for Haley, 38, who is hoping to succeed Republican Mark Sanford as South Carolina governor. After an endorsement from Sarah Palin helped skyrocket Haley to the front of the crowded GOP field, she was accused of an extramarital affair by a South Carolina blogger.

A second man then came forward alleging an affair. Haley vehemently denied both affairs, vowing to resign if proof of them emerges after she is elected.

Then last week a political rival, speaking on an Internet political talk show, called Haley (along with President Obama) "raghead," presumably in reference to her Indian background.

Haley, who pushed herself as a conservative, pro-family candidate, effectively weathered it all, reports Montopoli.

Curiously, given the national mood, a pair of former governors - Republican Terry Branstad in Iowa and Democrat Edmund G. Brown Jr. in California - hoped to take the first steps toward reclaiming the power they once held.

The races took place in the shadow of the worst recession in decades, stubbornly high unemployment, dispiriting day-by-day images of the damage caused by an offshore oil rig disaster, and poll after poll that reported the voters angry and eager for a change.

"I don't believe very many politicians or very many people on the political scene, so I just had to vote my conscience and my prayers," said Judy Hamilton, a 59-year-old administrative assistant from Columbia, S.C., as she cast her ballot in the state's Republican primary.

That sentiment made the day's balloting a prelude to the fall, when Republicans hope to challenge Democrats for control of Congress and the two parties vie for three dozen statehouses midway through President Barack Obama's term.

And in Georgia, Republican Tom Graves, running with tea party support, won a special election to fill out the final few months left in the term of former GOP Rep. Nathan Deal. who resigned to run for governor.

Lincoln, a two-term moderate, narrowly led in balloting in the Arkansas primary on May 18, but was thrown into a runoff three weeks ago when she fell short of a majority.

"There are very few who come out on the battleground and dare to say, 'Where is the common ground? Where do we solve these problems?' One of the reasons I've been beat up is I've gotten out of that foxhole. I'm out here in the middle," the endangered incumbent said after voting in west Little Rock.

Organized labor, angered over Lincoln's positions on health care, union organizing proposals and trade, poured more than $5 million into an effort to lift Halter to the nomination. Union leaders said they were intent on demanding accountability from lawmakers who make promises and then fail to follow through.

Still, Halter declined consistently to state a public position on one of labor's big priorities - the proposal to make it easier for unions to organize workers.

The winner will face Republican Rep. John Boozman in the fall in a race that the GOP has made one of its top targets.

In South Carolina, Haley battled several rivals as well as claims that she has had trysts with two men. She vociferously denied the allegations of infidelity, and relied on support from tea party activists and an endorsement from former Alaska Gov. Sarah Palin to aid her in the race with Rep. Gresham Barrett, Lt. Gov. Andre Bauer and state Attorney General Henry McMaster.

In California, Brown faced little opposition for the Democratic nomination to reclaim an office he left in 1983. Among Republicans, former eBay chief executive Meg Whitman and Insurance Commissioner Steve Poizner were the leading contenders in a battle of multimillionaires. She spent more than $70 million of her own fortune, while he put in more than $25 million.

In Iowa, Branstad, who served four terms as governor before leaving office in 1999, was opposed by two candidates as he sought the Republican nomination to run against Gov. Chet Culver.

Fiorina, 55, rolled to victory Tuesday after a campaign that focused on convincing conservatives she is one of them - opposing abortion, gay marriage and steps the government has taken to prop up the economy.

There also were primaries in 97 House districts, with little serious opposition for most incumbents despite the evident public anger at elected leaders.

In South Carolina, Rep. Tim Scott was in a nine-way race for the Republican nomination for Congress. If elected in the fall, he would be the only black member of his party in the House.