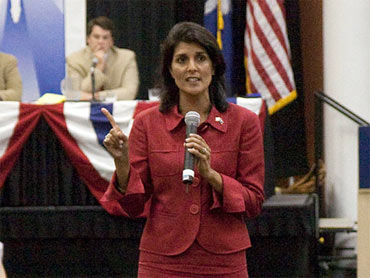 Republican Nikki Haley, who is hoping to succeed Mark Sanford as South Carolina governor, is denying a claim by Republican blogger and former Sanford aide Will Folks that the two engaged in an "inappropriate physical relationship" several years ago, before he was married.

Folks writes that he decided to come forward because "within the last forty-eight hours several pieces of information which purportedly document a prior physical relationship between myself and Rep. Haley have begun to be leaked slowly, piece by piece, to members of the mainstream media. I am told that at least one story based upon this information will be published this week."

He says he will not be discussing the relationship further.

"People are human. We make mistakes," he writes. "... I can sleep at night knowing I handled this the best way I knew how (the way my wife and I decided together that it needed to be handled), which was to simply tell the truth."

"I have been 100% faithful to my husband throughout our 13 years of marriage," Haley said in a statement. "This claim against me is categorically and totally false."

Haley's candidacy has been on the rise thanks in large part to an endorsement from Sarah Palin, who campaigned for her earlier this month. Also campaigning for Haley was Jenny Sanford, who divorced current governor Mark Sanford after revelations of his infidelity.

As Ben Smith notes, Haley, speaking of Sanford, has vowed that she is "not going to screw up like he did." Smith also reports that Folks was on Haley's campaign payroll in 2008.

UPDATE: Palin has posted a spirited defense of Haley on her Facebook page.

"South Carolina: don't let some blogger make any accusation against your Nikki if the guy doesn't even have the guts or the integrity to speak further on such a significant claim," she wrote. "And don't believe anything a liberal rag claims or suggests unless the reporter involved has the integrity and the facts to report to you so you can make up your own mind. For traditional media to rely on an accusation via some blog entry is almost laughable, but I know the seriousness of it because that's exactly what my family and colleagues have had to put up with, every single day, for the past couple of years."