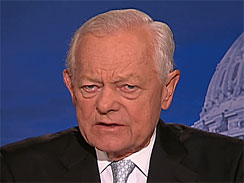 The biggest election day of the year heading into November came with a few surprises. But the real story was ladies night. Women from both parties dominated the political landscape.

While the BP oil spill and the government's "impotence" likely played a role, it is difficult to draw one central conclusion from the races because they were influence by everything from money and labor unions to the tea party and political plot lines reminiscent of "Desperate Housewives," says CBS News chief Washington correspondent Bob Schieffer.

"There's just this general feeling that the government is sort of impotent to do much of anything about anything. And I think there's no question that has something to do with the voter frustration that's being felt out across the country," Schieffer said on CBS' The Early Show on Wednesday.

"But it really is hard to draw much deep analysis or deeper meaning from these races last night. Because they were all so different."