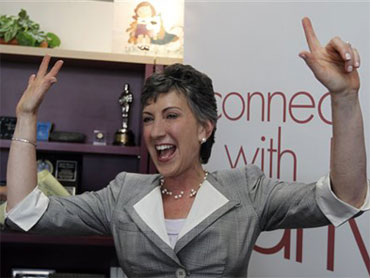 The 55-year-old Fiorina rolled to victory Tuesday after a campaign that focused on convincing conservatives she is one of them - opposing abortion, gay marriage and steps the government has taken to prop up the economy.

Fiorina started her campaign as the front-runner but fell behind when former congressman Tom Campbell switched from the gubernatorial race to the Senate contest.

She made up significant ground in the final month by putting much of her personal fortune into a late advertising blitz.

Boxer was unopposed for the Democratic nomination.