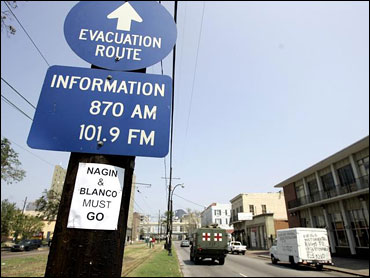 Sept. 20, 2005
7:15 a.m.
(CBS) — Despite a new warning from New Orleans' mayor, there were long lines of cars and trucks hearding into the city Monday, CBS News correspondent Cami McCormick reports. Many of them were contractors, hoping to help with the cleanup, who now face a delay in their work due to Tropical Storm Rita.

7:04 a.m.
(AP) — Cuban President Fidel Castro is lamenting that the U.S. government has still not responded to his offer to send nearly 1,600 Cuban doctors to help Hurricane Katrina victims, saying the team could have saved lives.

6:30 a.m.
RUTHERFORD, N.J. (AP) — Several hundred displaced New Orleans Saints fans were in the stands Monday night, watching their team play. The Saints lost what was supposed to be their home opener, 27-to-10 to the New York Giants in East Rutherford, New Jersey.

Evacuees were brought to the game by bus as guests of the National Football League.

Oceanographers say there's an even greater potential risk to the environment from pesticides, industrial chemicals, petroleum byproducts and other pollutants in the runoff of Hurricane Katrina. They say the situation could worsen if Tropical Storm Rita's potential path toward the hobbled Gulf Coast pushes those waters toward Florida.

Scientists say toxic plumes from New Orleans are being swept into two paths toward the peninsula. They're awaiting results from water samples taken last week along the northern Gulf Coast from Pensacola to the Mississippi Sound.

A ten-year-old boy named Austin approached Mrs. Bush at the convention center and expressed disbelief she was the First Lady. She assured him of her identity, saying: "I'm married to the President," then held hands with two other children as she walked through the shelter. As for the president, he's heading back to the hurricane zone today. He's scheduled to visit Gulfport, Mississippi, and then fly down to New Orleans.

6:10 a.m.
WASHINGTON (AP) — Anyone convicted of fraudulent use of Hurricane Katrina disaster funds would face at least five years in prison under a bill filed in Washington. The bill, introduced by Texas Republican Senator John Cornyn, would require a minimum penalty of five years in prison and up to 20 years for conviction of any crime involving hurricane relief funds. Cornyn says he's also working to make sure that Texas is properly reimbursed for its Hurricane Katrina relief efforts.

6:05 a.m.
NEW YORK (AP) — Hanson is matching a school's charity fundraiser after endless hours of "MmmBop." Delone Catholic High School in McSherrystown, Pa., held a "Stop The Bop" campaign to raise money for victims of Hurricane Katrina: refusing to stop playing "MmmBop" over the school public address system until their goal was reached.

Once they raised $3,505.95, "MmmBop" stopped. That could be insulting, that could be flattering. Hanson is taking it as a compliment. The band matched the donations and gave every student in the school a copy of their new album, "Underneath."