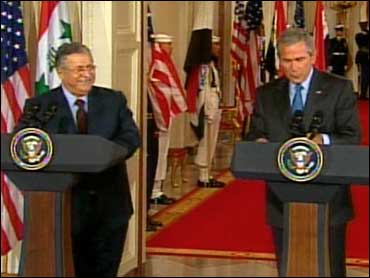 2:20 p.m.
NEW ORLEANS (AP) — Despite concerns about germs and other risks from filthy New Orleans floodwaters, public health officials aren't seeing many cases of disease. Instead, they're seeing injuries: more than 148 cases in just the past two days. Workers report these include chainsaw wounds and carbon monoxide poisoning related to the use of generators.

1:23 p.m.
(CBS) — Even in areas where tons of debris line the cleared streets where rarely a house is left, landlords in Mississippi are being told that they can't evict tenants in order to rent to someone else — most likely a hurricane evacuee — for more money. With tens of thousands of people having no place left to live, county judges are trying to make sure renters are not pushed out, CBS News correspondent Lee Frank reports.

12:30 p.m.
(CBS/AP) — President Bush on Tuesday took "full responsibility" for government failures in dealing with Hurricane Katrina and said the disaster raised broader questions about the government's ability to respond to natural disasters as well as terror attacks.

"Katrina exposed serious problems in our response capability at all levels of government," Mr. Bush said at joint White House news conference that otherwise focused on the conditions he and Iraqi President Jalal Talabani see as necessary for a withdrawal of U.S. troops from Iraq.

(CBS/AP) — More than 75,000 evacuees from Gulf Coast states affected by Hurricane Katrina are being sheltered by the Red Cross.
Other up-to-date statistics: