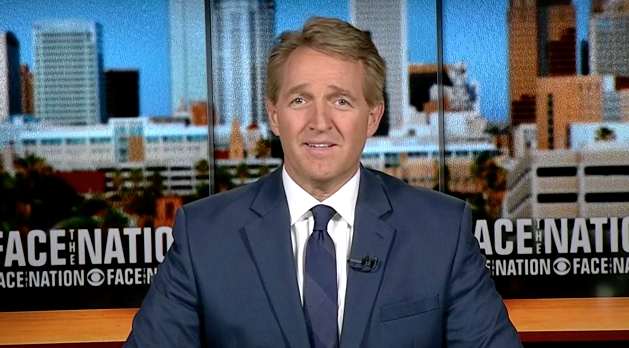 Arizona Sen. Jeff Flake said that his friend and fellow Republican colleague John McCain will forever be remembered as the "conscience of the Senate" for the "outsized impact" he had on the body over the course of his tenure. McCain, known as a political "maverick" over his years in the Senate, died on Saturday at age 81 at his Arizona home.

"He had an outsized impact on Congress his entire time there, particularly in the last several years. He was the conscience of the Senate. He really was," Flake said on "Face the Nation" on Sunday. "And so, I don't think you can overstate the importance or impact of his impact on the body."

Flake said it was a "privilege" to be able to spend some final moments with the senator and his family as he ended treatment for brain cancer. Flake said that he thanked his colleague, who crafted on a reputation for bucking GOP leadership on several issues, for "speaking out in this last year when we needed his voice the most."

While Arizona Gov. Doug Ducey will select the replacement for McCain's seat, Flake, who will not be seeking reelection in 2018, said he shared McCain's confidence that there will be a bipartisan voice to stand up in McCain's place.

"I think that there will be people who are there and others who will rise up," said Flake. "[McCain] expressed such admiration for Arizona leaders in the past who stood up — these iconoclastic Arizona figures like Goldwater and Mo Udall and others. And he expressed at that time his optimism that others would come to the fore. That at some point, the voters would value people who can govern and who reach across the aisle and see good in their opponents. So I think that that's certainly his legacy, and I do believe that others will stand up."

Before he died, McCain requested that former Presidents Barack Obama and George W. Bush speak at a service honoring his memory. The fact that McCain wanted two of his former rivals on the campaign trail to honor him "says you all you need to know about John McCain," Flake said.

"He was quick to forgive, certainly put the good of the country above himself and the fact that his former opponents will be there speaking says all we need to know," said Flake.

Flake also said he would support a resolution from Sen. Chuck Schumer, D-New York, to rename the Russell Senate Office Building in Washington after McCain, calling it a "fitting tribute" to the giant of the Senate.