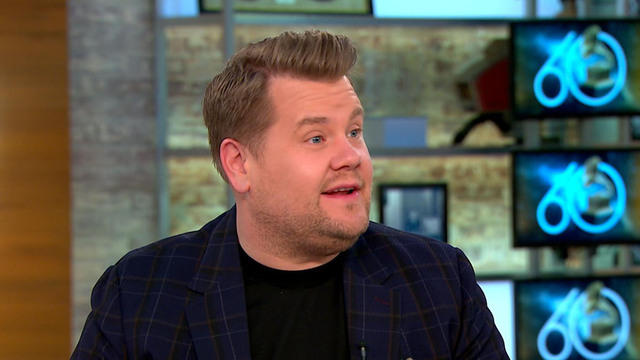 "The Late Late Show" host James Corden is perhaps best known for his hugely popular segment "Carpool Karaoke" in which he invites musical guests to sing along to their songs with him as they drive. This Sunday, he'll join some of the world's biggest musicians as host of the 60th Annual Grammy Awards at New York's Madison Square Garden.

Corden also hosted the awards show last year with a grand entrance that included a staged tumble down the stairs, rapping and later an impromptu "Carpool Karaoke" with stars like Jennifer Lopez and John Legend. Despite the favorable reviews he received his first time as host, Corden told "CBS This Morning" he still doesn't feel like he's totally ready.

"I certainly don't feel like I've got this about any facet of my life, really," Corden said. "I'm from High Wycombe which is a town that none of you have heard of. That's how small it is. And so to be hosting a show like the Grammys is so far beyond anything I ever thought I would ever do with my life. We're going to try and, you know, just not ruin it, really."

The star-studded lineup of performers for this year's ceremony include Kendrick Lamar, Khalid, Kesha, Lady Gaga, Childish Gambino and Sam Smith. For Corden, the Grammys stand apart from other awards shows for exactly that reason.

"We're just going to try and, you know, arrive with some little bits of fun because most award shows, let's be honest, are groups of millionaires giving each other statues, and the Grammys is different than that because the Grammys is all about the performances. It's all about the music," he said.

With the highly anticipated wedding of Prince Harry and Meghan Markle set for this summer, "CBS This Morning" co-host Gayle King asked Corden if he, as someone from Britain, is as excited about the royal wedding as America seems to be.

Corden said with the recent "changes in administrations" in the U.S. government, he finds himself worried that Americans might be losing some of that enthusiasm.

"You almost want to shout from the top of the Empire State Building to America to go: 'Don't lose that thing, don't lose the very thing that makes genuinely America great.' Forget 'America great again.' 'America great' is a boundless, joyful enthusiasm that anything is possible," he said.

Boundless Joy, King said, is exactly what his series "Carpool Karaoke" is all about. Corden said while there are so many artists he'd love to do it with, they're trying to maintain the excitement each new installment brings.

"I think some 490 shows now and we've done I think we've done 35 'Carpool Karaokes.' And so what we don't want to do is get into a position where we're doing it every week. We always want it to feel like, Oh, there's a new one now. So we're, in fact, right now as it stands, we don't actually have anybody booked to do it because we just always want it to sit in that rarefied air as being a thing where you go, 'I've never seen this artist in this situation,'" he said.

Still, he said they'd never give a musician who was interested a flat-out "no."

"We'd never be so bullish as to say 'no' to anybody. Not on our show. We're literally one cup of tea away from your show beginning that's how late we're on," Corden joked. "That's the truth. That's how late -- it's in the middle of the night."

Urvashi Rangan, consumer safety and sustainability director at Consumer Report, joins "CBS This Morning" to discuss the results of the magazine's study.