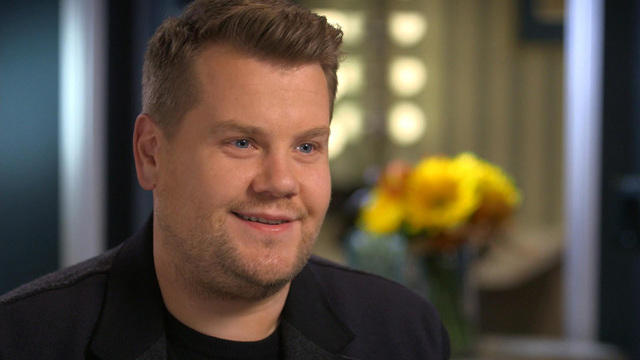 “The Late Late Show” host James Corden has been tapped to emcee music’s biggest night. About 18,000 will gather at the Staples Center in Los Angeles Sunday for the 59th Grammy Awards, airing on CBS.

Corden will take the stage alongside some of the biggest names in the music industry, like Lady Gaga, Bruno Mars and Adele. CBS News correspondent Ben Tracy asked Corden if he’s feeling any pressure.

“So kind of on a scale of calm, cool and collected to losing your mind, where are you at in terms of nerves?” Tracy asked.

“Well, I like nerves. I think nerves are good. I think you’re only nervous when you want to do your best,” Corden said. “I haven’t gone to bed for like a month now where I have not been thinking about the Grammy Awards, because it means a lot to me to host it and I just don’t want to let anybody down. I want the show to be a true celebration of everybody in that room.”

As the host of “The Late Late Show,” Corden has been singing along with some of the best voices in the music industry. Many of this year’s Grammy nominees have ridden shotgun during his carpool karaoke, including Sia and Justin Bieber.

The segments shifted Corden’s career into high gear, from an obscure British bloke less than two years ago to a full-fledged social media sensation.

“Nineteen months ago, most people in this country were saying, ‘James who?’ No one says that anymore,” Tracy said.

Corden has already proved that he’s got the skills to host a major awards show. He earned rave reviews for hosting the Tonys last year. But with the Grammys, he said he’ll take a backseat to the night’s big performers.

“You know, most award shows are a succession of millionaires giving each other gold trophies. Do you know what I mean?” Corden said, laughing. “And this is a show which, essentially at its core, is a music performance. And if we can just bring the show along in the sense of warmest, most joyful sense, that’s what we will try to do.”

He won’t say what big moments he has planned, but his team has been figuring out ways to put their own stamp on the show. Corden said he’s most excited to see his friend Adele perform.

“I have a huge soft spot for Adele, only because I’ve known her a very long time,” Corden said. “I consider her to be a very good friend of mine and my whole family’s really. I feel incredibly emotional if I think about the fact that this person who I love and respect, and seeing her just become this artist who almost defines the music industry at the moment. And the fact that she’ll be there and I’m going to do this thing, it’s really, really nice.”

His sing-along with the superstar has now been viewed more than 147 million times – part of what made Corden become a household name and an unexpected cover boy.

“You are the cover boy of Esquire. Did you see that coming?” Tracy asked.

“Well, I worked as a model in my… of course not,” Corden said. “Are you joking? All of these things -- this is all ridiculous. You know, it feels like at some point... someone’s going to tap me on the shoulder and go, ‘Oh, I’m so sorry, we’ve made a terrible mistake. We actually meant someone else.’ I hope I’m doing it for the big men everywhere, who never get represented in such a place. But I’ll keep trying to represent them as best I can.”

As Grammy host, Corden will only represent on stage for about 17 minutes of a show known for hours of performances.

“What will you be doing the rest of the time?” Tracy asked.’How much of a fan will you be backstage of what’s going on?”

“I imagine I will just be looking for catering,” Corden said. “If anyone can’t find me, I’ll be wherever the M&Ms are. Or... I’ll go snooping... around to see who’s got the best snacks. Maybe there’s a greater snack area for the real A-listers and maybe I’m getting in there.”

“The host might have his own room for it,’ Tracy said.

Surgeon salesmen? Doctors profit from devices they put in patients