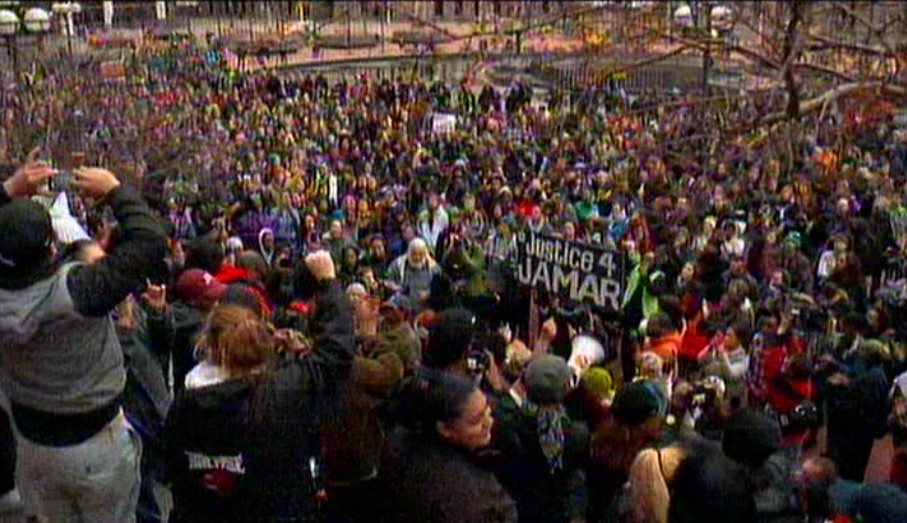 MINNEAPOLIS --Hundreds of protesters gathered Wednesday night in north Minneapolis near the spot where a black man was shot in a confrontation with police last November.

The gathering came hours after a prosecutor declined to charge two police officers in the death of 24-year-old Jamar Clark. The prosecutor said the officers were justifiably in fear for their lives as Clark tried to get hold of an officer's gun.

The demonstrators marched down a major street to the Hennepin County Government Center, chanting things like, "Hands up! Don't shoot!" and, "No justice, no peace. Prosecute the police."

"If the city burns, it's on your hands," one demonstrator told Hennepin County Attorney Mike Freeman after his decision was announced, CBS Minnesota station WCCO reported.

Clark died a day after he was shot. It sparked waves of protests and an 18-day encampment outside the police precinct near where he died.

Family members said Clark had been in trouble in the past but was turning his life around, working at a car wash and about to take a second job in construction.

Cameron Clark told WCCO his cousin's mistakes on the last night of his life should not have caused his death.

"I know my cousin didn't tell that officer he was ready to die," Cameron Clark said. "I know he didn't, and for Mike Freeman to make that story up, and lie like that, he's got blood on his hands. And that's all I'm going to say."

"We don't buy the story and we think this is an example of an unjust justice system," Mel Reeves of the Twin Cities Coalition for Justice for Jamar Clark said. "Where do we go from here? We can't get simple justice when a man is killed?"

"I didn't agree with it, so I'm showing solidarity with Jamar, with the Black Lives Matter movement, with the people here," Salah Osman of Minneapolis said. "I think that's why we're all here."

"It's people coming together to witness an injustice and to fight against that injustice, and wanting to change the system," another protester said.

Mihesha Gibbs, a 27-year-old administrative assistant from south Minneapolis, said incidents like Clark's shooting are becoming so common that they're no longer shocking.

Gibbs said she doesn't condone violence but says that police can't "back someone into a corner and expect them not to have sort of reaction."

Mayor Betsy Hodges said after the ruling that it was has a hard day for everyone in Minneapolis and that many are feeling hurt, angry, disappointed and frustrated.

"My heart breaks for the loss of Jamar Clark's life, and for the pain felt by everyone involved in this incident," Hodges said, according to WCCO. "There is a tear that has ripped through our community, one we cannot sew back up. And together as a city and a people, we can walk through this tear to build what we all want -- a city that is safe and equitable for everyone."

Police Chief Janeé Harteau said the situation was a tragedy for everyone, including the Clark family and Minneapolis officers.

Harteau reiterated that while the community has the right to protest, the city's top priority is to keep the public safe as well as those expressing their First Amendment rights. She also emphasized that demonstrators not block emergency vehicles and first responders whose job it is to protect and serve the public.

"It's obviously been tragic for everyone, including the Clark family, but also including our officers," Harteau said.

Harteau said the department has contingency plans in the event that there are protests at or near the Fourth Precinct. She said officers will exercise restraint, and their actions will be based on the actions of others.

The head of the union that represents Minneapolis police officers said the public should accept the results of the investigation that he said "exonerated" two officers involved in the Clark shooting.

Lt. Bob Kroll told reporters that Officer Mark Ringgenberg and Officer Dustin Schwarze were relieved they were not charged, but they still face internal and federal investigations.

Kroll said the two officers did what they had to do when they confronted and shot Clark on Nov. 15. Clark died a day later.

Kroll also appealed for calm from the community, saying "hostility" was not going to get anywhere. He said officers will protect the public's right to protest peacefully and lawfully, but he says rioting is a felony.