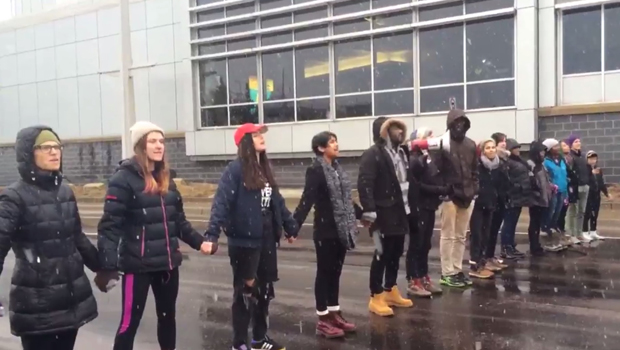 Some Black Lives Matter protesters took a light-rail train to the airport in an attempt to "shut to down" after the nation's largest mall was closed by police, CBS affiliate WCCO reported.

Groups of protesters gathered at both terminals around 2 p.m., blocking traffic on Highway 5 and the roads into both terminals. Not long after, the State Patrol ordered the protesters to disperse and cleared the highway.

"The mall was a decoy," said Black Lives Matter organizer Miski Noor, who protested at the airport. "I think it was really effective."

Police said a total of 15 people were arrested at both sites, mostly for trespassing or obstruction of justice, but that no injuries or property damage were reported.

Stores closed their gates, kiosks were covered and even Santa left his sleigh at massive suburban Minneapolis mall shortly before protesters gathered Wednesday afternoon, one of the busiest shopping days of the year. They abruptly walked outside while chanting, "What do we want? Justice! When do we want it? Now!"

Organizers said the rally was intended to draw attention to the police shooting last month of Jamar Clark. The 24-year-old black man died the day after he was shot by Minneapolis police responding to a recent assault complaint.

A similar demonstration last December drew hundreds of demonstrators angry over the absence of charges following the police killings of unarmed black men in New York City and Ferguson, Missouri. Stores in the mall had to close, and dozens of people were arrested.

The massive retail center in the Minneapolis suburb of Bloomington houses an amusement park and more than 500 shops spread across four floors, attracting shoppers from around the globe.

Neither mall officials nor Bloomington police said what security measures they put in place to prepare for the protest, though special event staff members were searching bags and stationed at every mall entrance. Security guards cordoned off parts of the central rotunda, and officers from several cities patrolled inside.

Dozens of stores had closed their gates shortly before the protest started.

The mall sought a court order blocking the planned protest. A judge on Tuesday barred three organizers from attending the demonstration, but said she doesn't have the power to block unidentified protesters associated with Black Lives Matter -- or the movement as a whole -- from showing up.

Bloomington Police Deputy Chief Denis Otterness confirmed officers would be at the mall, but declined to discuss their plans for handling the protest.

"We're just not releasing that at this point," he said. "Our number one priority is the safety of everybody out at the Mall of America today."

Gov. Mark Dayton also told reporters early Wednesday that 30 Minnesota State Patrol officers will be on scene at the local police department's request. He said he sympathizes with protesters' concerns, but he stressed that the mall is private property.

Kandace Montgomery, one of three organizers barred by the judge's order, said the group isn't deterred by the ban. She said she expected at least 700 people to show up -- including some who were prepared to be arrested.

On one of the busiest shopping days of the year, Montgomery said the retail mecca is the perfect venue for their demonstration to pressure authorities involved in the investigation of Clark's death to release video footage.

"When you disrupt their flow of capital... they actually start paying attention," she said. "That's the only way that they'll hear us."