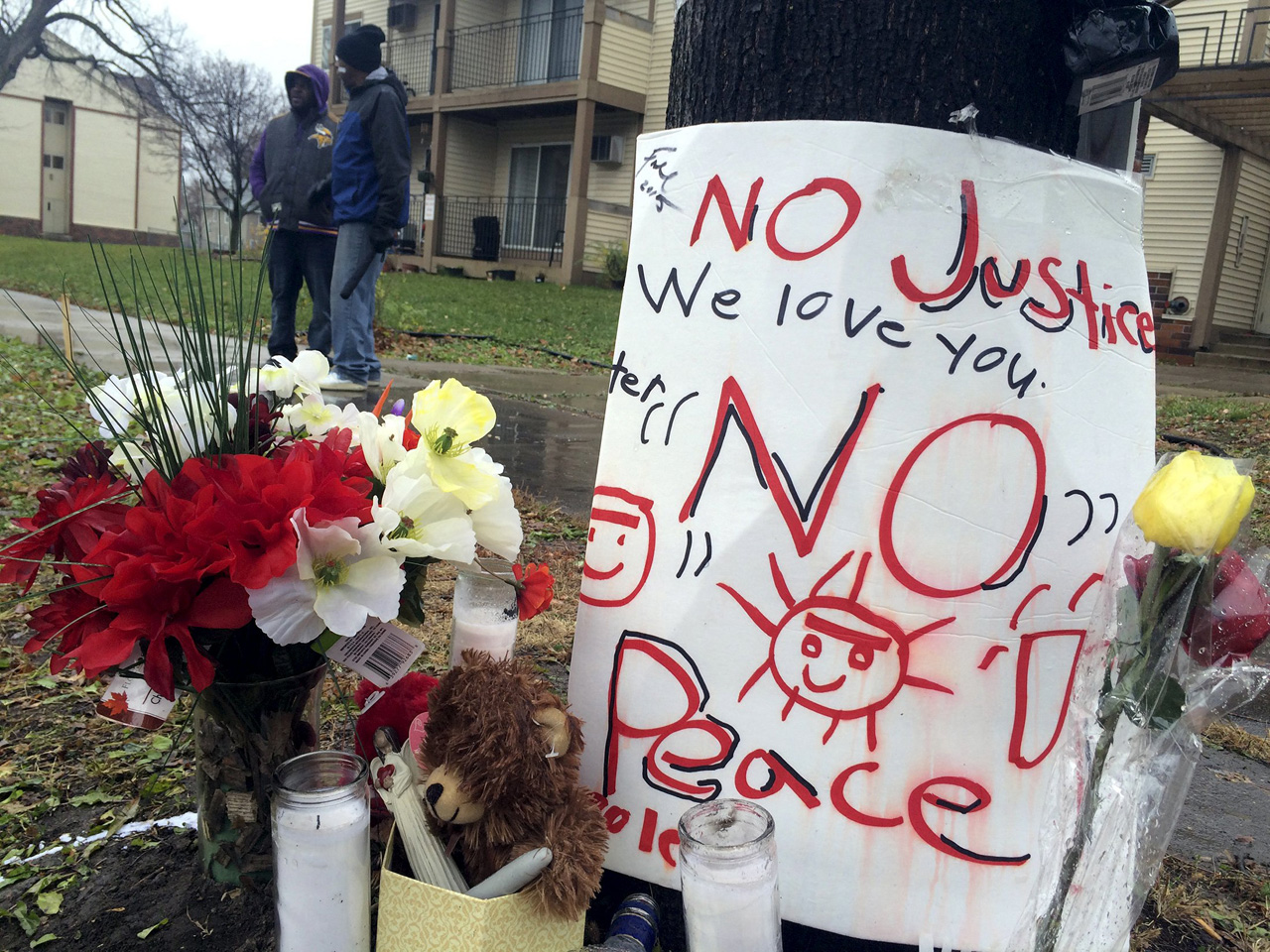 MINNEAPOLIS - Community members and activists demanded Monday that Minneapolis police identify an officer who shot a black man suspected in an assault and release video of the incident.

Witnesses to the shooting just after midnight Sunday said the man was handcuffed when he was shot, sparking protests and an overnight encampment outside a police precinct on the city's north side.

Police did not immediately release the name of the man, but family members identified him as Jamar Clark, 24, and said he was on life support. Police said their preliminary investigation showed the man was not handcuffed at the time of the shooting, but the state's Bureau of Criminal Apprehension was investigating.

"None of our children deserve to be shot and killed, and then talked about like they are animals," Bettie Smith, whose son Quincy Smith died in a 2008 confrontation with police, said at a news conference outside the north Minneapolis precinct.

"Unless the community steps up to help us out, it will continue. Each and every one of us out here would be held accountable if we murdered someone," she added.

Authorities said Monday they had no new information to release on the shooting.

On Sunday afternoon, about 150 people assembled at the scene of the shooting to demonstrate. Some protesters camped out at the police station overnight. Minneapolis Mayor Betsy Hodges and police Chief Janee Harteau held a listening session with the community Sunday evening, where some community members shouted in anger.

Harteau said after the meeting that "misinformation" is being spread about the case, but she would not elaborate.

"We have been saying for a significant amount of time that Minneapolis is one bullet away from Ferguson," he said, referring to the police shooting last year in the St. Louis suburb that prompted nationwide protests. "That bullet was fired last night. We want justice immediately," Sole told Minnesota Public Radio News.

Martez McKnight, 22, told The Associated Press that Clark, his uncle, was put on life support after he was taken to a hospital.

"The family is heartbroken and traumatized by the whole event," McKnight said.

Two officers are on paid leave, standard practice after such an incident. It wasn't immediately clear if they were wearing body cameras. The city has been testing cameras with a small number of officers ahead of an expected wider rollout next year.

Clark has had contact with police in the past.

Earlier this year, he was convicted of a felony count of terroristic threats and sentenced to 15 months in prison, but his sentence was stayed for five years and he was out on probation. In exchange for that guilty plea, a misdemeanor domestic assault charge and charges of damage to property were dismissed.

He was also convicted of aggravated robbery, a felony, in 2010 and convicted of a petty misdemeanor count of possessing a small amount of marijuana in 2009

The protests are just the latest expression of tension between the department and minorities in the city.

Outrage and a civil lawsuit followed the 2013 death of 22-year-old Terrance Franklin, a burglary suspect whom police pursued and shot in a Minneapolis basement. A grand jury declined to indict the officers involved.

In 2014, a prominent civil rights activist Al Flowers complained of being the victim of brutality when police served a warrant on a relative at his home. Police say Flowers instigated their aggression.

The rocky relations have led to discussions between police and minorities and the creation of task forces designed to quell concerns. A special civilian review authority was formed after the death of an elderly black couple during a botched drug raid decades ago.

This spring, Minneapolis was selected for a federal Justice Department program to rebuild trust between police and the communities they patrol.