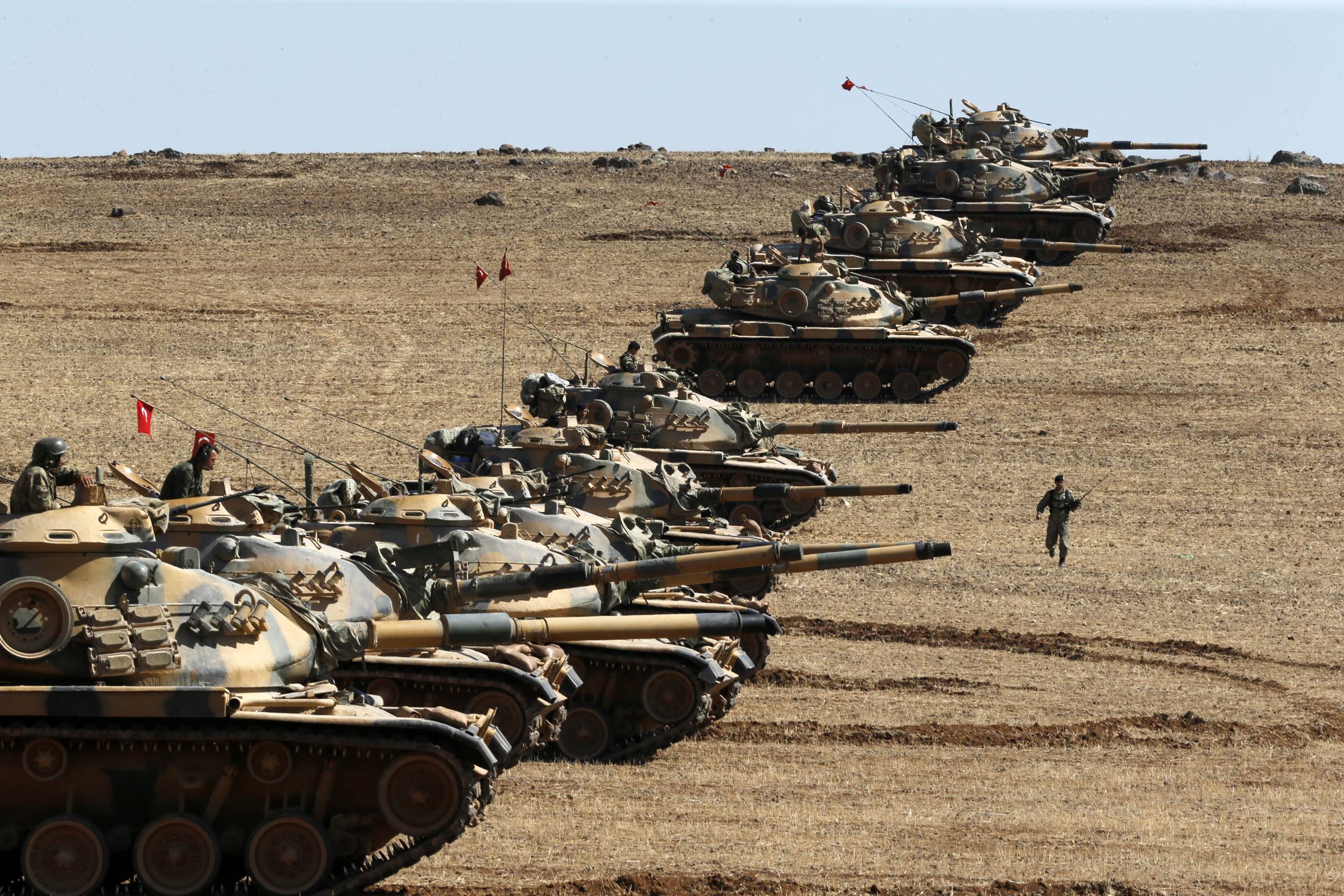 BEIRUT -- Kurdish forces defending a Syrian town near the Turkish border clashed with militants from the Islamic State of Iraq and Syria (ISIS) on Monday after repelling a wide-ranging jihadist assault the day before in battles that left dozens dead on both sides.

While the Kurds remain in control of the town of Kobani, an Associated Press journalist on the Turkish side of the border saw two black banners with Arabic writing - one raised over a building and another from a nearby hill - at the eastern entrance on Monday, suggesting that ISIS fighters may have regrouped and broken through the Kurdish perimeter.

The Britain-based Syrian Observatory for Human Rights and a statement from the Kurdish force known as the People's Protection Units, or YPK, said more than 45 fighters on both sides were killed Sunday near the town of Kobani, including a Kurdish female fighter who blew herself up, killing several jihadists.

Kobani and surrounding areas have been under attack since mid-September, with ISIS militants capturing dozens of nearby Kurdish villages.

The YPK said in a statement that there were 50 points of clashes around Kobani on Sunday, adding that 74 ISIS fighters as well as 15 Kurdish gunmen were killed. The Observatory said 27 jihadists and 19 Kurds were killed in the battles, making it one of the deadliest days since the latest round of fighting began three weeks ago.

ISIS appeared to be making advances in at least some of the hotspots around the town, reportedly raising their flag on a building after clashes in the eastern part of Kobani.

The assault has forced some 160,000 Syrians to flee and strained Kurdish forces, who have struggled to push back the jihadists despite being aided by U.S.-led coalition airstrikes.

On the Turkish side of the border, at least 14 Turkish army tanks took up defensive positions on a hilltop near Kobani. Heavy bombardment could be heard down below as plumes of smoke rose from the town.

A shell from the fighting struck a house and a small grocery store across the border in Turkey, but no one was wounded. At least four people were injured in a similar incident on Sunday.

Syrian Kurdish forces have long been among the most effective adversaries of the ISIS group, keeping it out of their enclave in northeastern Syria even as the extremists routed the armed forces of both Syria and neighboring Iraq in recent months.

But in recent weeks the overstretched Kurds have struggled to counter the jihadists, who have looted heavy arms and vehicles from captured Syrian and Iraqi army bases.

"They are using tanks, artillery and all kinds of weapons they captured in Iraq and Syria," said Nasser Haj Mansour, a defense official in Syria's Kurdish region, referring to ISIS, which has declared a caliphate in the large areas it controls in both countries, and which now refers to itself simply as the "Islamic State."

The Observatory's chief Rami Abdurrahman said Monday that one of the attacks against ISIS the day earlier was carried out by a female Kurdish fighter who blew herself up, killing 10 jihadists.

Khamis was a member of a YPK branch known as the Women's Protection Units, or YPG. The force has more than 10,000 female fighters who have played a major role in the battles against ISIS, Haj Mansour said.

Haj Mansour said Kurdish fighters withdrew from a position on the strategic hill of Mashta Nour near Kobani. Khamis stayed behind, and as ISIS fighters moved in she attacked them with gunfire and grenades, eventually blowing herself up. The Kurds then recaptured the position.

"If necessary, all our female and male fighters will become Arin. The attacks by mercenaries of Daesh (another ISIS acronym) against Kobani will not be allowed to achieve their goals," the YPK statement said, using the Arabic acronym for ISIS.

Nawaf Khalil, a spokesman for Syria's leading Kurdish Democratic Union Party, or PYD, said: "Yesterday was a very violent day but they were neither able to enter Kobani nor Mashta Nour."

Meanwhile, elsewhere in Syria, al Qaeda affiliate there has attacked positions manned by Lebanon's Shiite Hezbollah along the border, killing eight of its fighters, officials and activists said Monday.

An official close to Hezbollah declined to say how many fighters were killed in Sunday's battles with the Nusra Front, but in mosques across Lebanon's eastern Bekaa valley funerals were announced for eight Hezbollah fighters.

Hezbollah has sent fighters to Syria to back President Bashar Assad's forces against rebels trying to remove him from power. The armed intervention in Syria earned the Shiite group the enmity of Syria's predominantly Sunni rebels. Assad is a member of the Alawite sect, an offshoot of Shiite Islam.

Over the past year, Syrian troops and Hezbollah fighters have captured most of the towns and villages in Syria's mountainous Qalamoun region along the Lebanon border, depriving the rebels of residential areas where they can stay during the winter.

Lebanese officials have warned that they expect Syrian rebels to try to capture areas on the Lebanese side of the border before the snow hits.

The fighting on Sunday lasted for several hours. The official said Hezbollah's response to the attack was "huge, strong and fast." The official spoke on condition of anonymity because he is not authorized to speak to reporters.

The official said the attackers captured an observation post known as Ein el-Saa before Hezbollah took it back about two hours later.

"This post was turned into their graveyard," the official close to Hezbollah said by telephone.

It appeared that Hezbollah fighters were taken by surprise, as Shiites in Lebanon marked the start of the Muslim holiday of Eid al-Adha. Shortly after the battles began, Hezbollah rushed reinforcements to the rugged mountainous region.

Abdurrahman of the Observatory said there were casualties among the Nusra fighters, but he could not provide an exact figure. The Britain-based Observatory gathers its information from a network of activists inside Syria.

It was the most serious incursion into Lebanon since Aug. 2, when Syrian rebels briefly captured the Lebanese border town of Arsal as well as 20 soldiers and policemen. Two of the soldiers were later beheaded by ISIS. The third was shot dead by the Nusra Front.