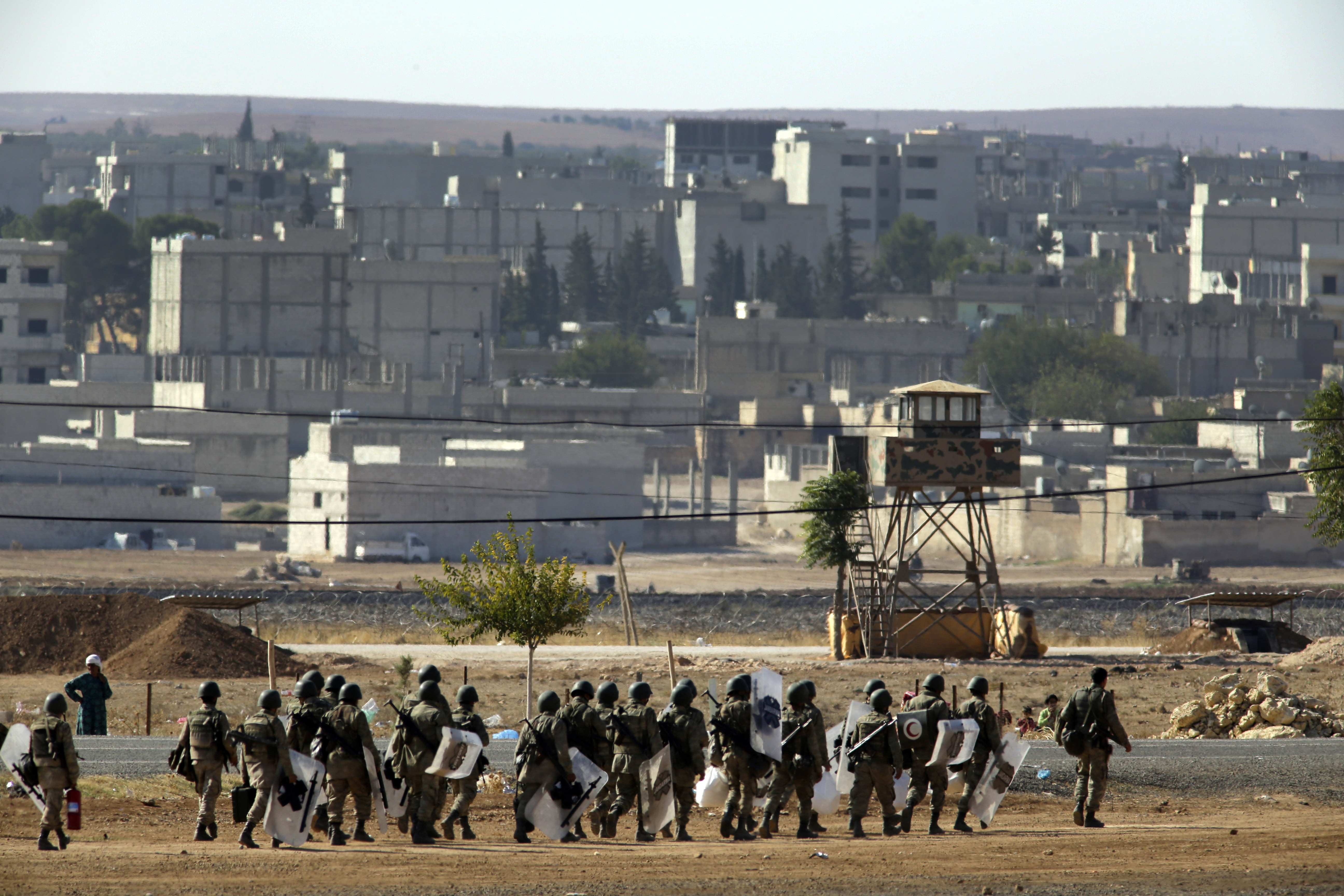 BEIRUT - Islamic State of Iraq and Syria (ISIS) militants on Sunday shelled a beleaguered Syrian Kurdish town near the border with Turkey, sending smoke billowing into the sky as Kurdish militiamen scrambled to repel the extremists' offensive, activists said.

ISIS has pushed to the outskirts of the town of Kobani, also known as Ayn Arab, as it presses its weeks-long offensive against the town and its surrounding villages. The assault has forced some 160,000 people to flee across the frontier in one of the biggest single exoduses of Syria's civil war.

ISIS has continued to advance despite airstrikes against its fighters by the U.S. and its Arab allies.

Overnight, coalition strikes targeted militant positions around Kobani, according to the Britain-based Syrian Observatory for Human Rights, an activist group.

The U.S. military said fighter aircraft conducted two strikes northwest of the city of Raqqa, hitting a large Islamic State group unit and destroying six militant firing positions. The statement did not specify the location, but Kobani is northwest of Raqqa.

The Observatory said that the airstrikes, combined with heavy clashes on the ground overnight, left at least 16 militants dead. At least 11 Kurdish militiamen were also killed in the fighting.

On Sunday, the extremists, who have staked out positions to the east, west and south of Kobani, shelled the town with rockets, mortars and tank shells, the Observatory said. There was also heavy fighting for control of a strategic hill south of the town.

From the Turkish side of the border, the heavy thud of the shelling could be heard, along with the sharp crackle of small arms fire, while pillars of smoke billowed from inside Kobani.

Some of the fighting has spilled over into Turkey, with artillery rounds falling on Turkish soil.

On Sunday, one shell fired from the Syrian side struck a house in the Turkish village of Buyuk Kendirci, wounding four people. A member of the family that owns the house, Dogan Polat, said that a 5-year-old child was among the injured.

The fighting between ISIS and the Kurds is one aspect of Syria's multilayered civil war, a conflict that has killed more than 190,000 people since the revolt against President Bashar Assad began in March 2011.

Like Turkey, Lebanon has been deeply affected by Syria's war. Lebanon has taken in more than 1 million refugees, seen its own sectarian tensions soar and security slip as the war next door has dragged on.

On Sunday, gunbattles erupted in eastern Lebanon along the border between Syrian insurgents, including from the al Qaeda-affiliated Nusra Front, and fighters from the Lebanese Shiite militant Hezbollah group, local officials said.

Hezbollah has sent its gunmen to Syria to help bolster Assad's forces and crush the uprising, earning the Shiite group the enmity of Syria's predominantly Sunni rebels. Assad is a member of the Alawite sect, an offshoot of Shiite Islam.

The Syrian insurgents attacked Hezbollah positions Sunday in the mountains separating Lebanon and Syria, prompting the Shiite group to send reinforcements, including jeeps mounted with heavy machine guns, to the hills outside the villages of Brital and Nahle, the officials said.

There were casualties among Hezbollah fighters, and some hospitals called citizens to donate blood, the officials said, speaking on condition of anonymity because they were not authorized to speak to the media. Many Nusra Front fighters also were killed, they said.

Clashes have become increasingly frequent along Lebanon's rugged frontier since militants from the Nusra Front and ISIS briefly took over the frontier town of Arsal in August before withdrawing with more than two dozen Lebanese troops as hostages.