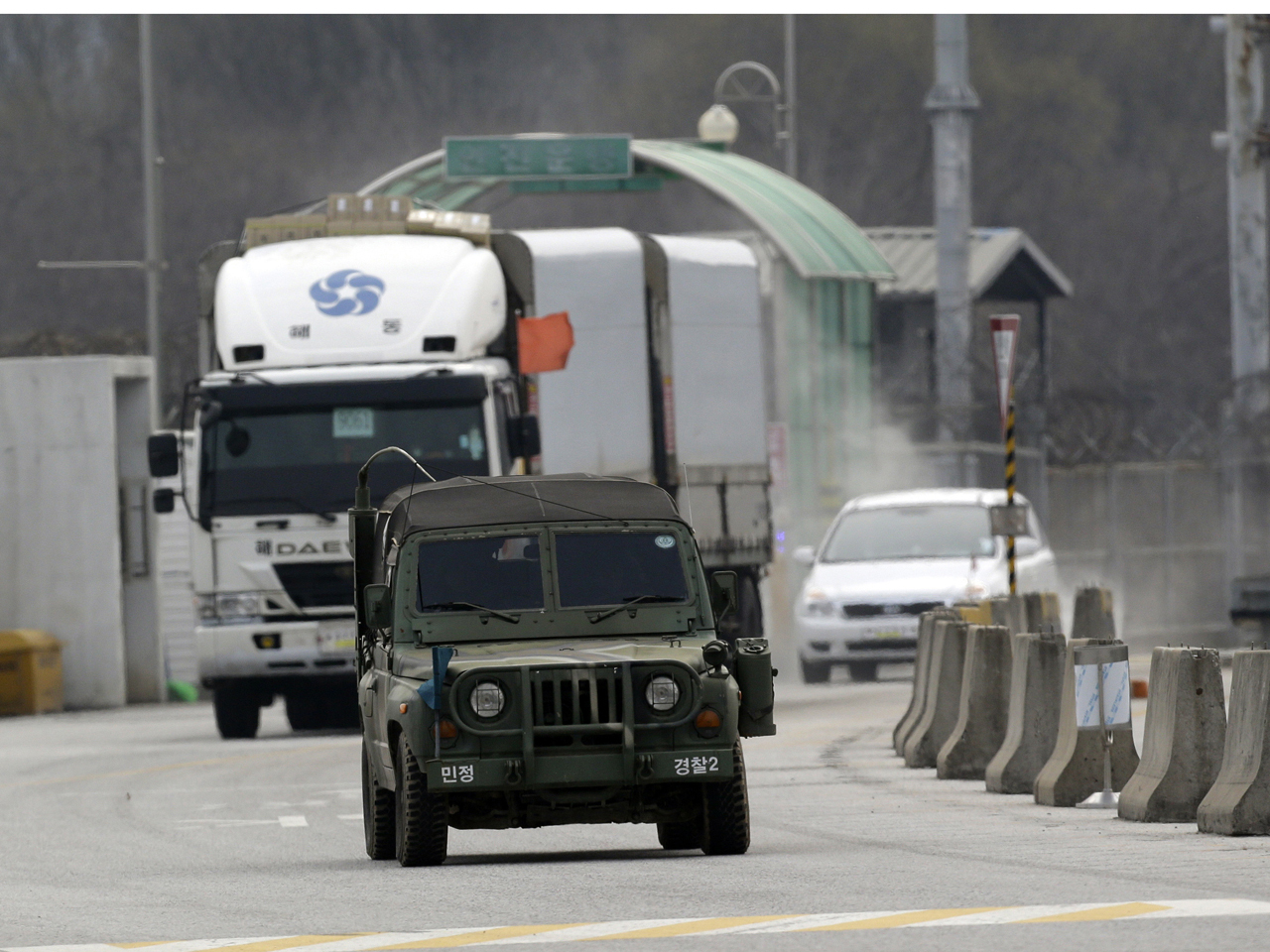 SEOUL, South Korea North Korea said Monday it will suspend operations at a factory complex it has jointly run with South Korea, pulling out more than 53,000 North Korean workers and moving closer to severing its last economic link with its rival as tensions escalate.

The Kaesong industrial complex just north of the Demilitarized Zone is the biggest employer in North Korea's third-largest city. Shutting it down, even temporarily, would show that the destitute country is willing to hurt its own economy to display its anger with South Korea and the United States.

Pyongyang's move follows weeks of threatening rhetoric and provocations aimed at Seoul and its U.S. ally following U.N. sanctions punishing the North for its third nuclear test, on Feb. 12. In recent days there have also been worries in Seoul of an even larger provocation from Pyongyang, including another possible nuclear test or rocket launch.

Sen. John McCain, R-Ariz., said Sunday on "Face the Nation" that news that North Korea is expected to go ahead with a missile launch signals "a catastrophe of enormous proportions."

McCain said what happens next will depend largely on China, whose relationship with North Korea, a senior official tells CBS News, is at a historic low.

The point of the threats and possible future provocations, analysts say, isn't a full-scale war, which North Korea would certainly lose. It's seen instead as an effort to force new, Pyongyang-friendly policies in South Korea and Washington and to boost domestic loyalty for Kim Jong Un, the country's young, still relatively untested new leader.

The statement about Kaesong came from Kim Yang Gon, secretary of the Central Committee of the Workers' Party of Korea. It did not say what would happen to the 475 South Korean managers still at the Kaesong industrial complex. The statement also did not say whether the North Korean workers would be recalled immediately, and a South Korean manager at Kaesong said he had heard nothing from the North Korean government.

"North Korean workers left work at 6 o'clock today as they usually do. We'll know tomorrow whether they will come to work," said the manager, who declined to be identified because he was not authorized to speak to the media. North Korea had asked South Korean managers to say when they intended to leave by Wednesday; the manager said he did not know whether he and his South Korean colleagues now will be forced to leave.

Kim's statement said North Korea will now consider whether to close the complex permanently. "How the situation will develop in the days ahead will entirely depend on the attitude" of South Korean authorities, it said.

Yoo Ho-yeol, a North Korea expert at Korea University in South Korea, said the North probably will close the park. "North Korea will wait to see what kind of message we will send ... but there is no message that we can send to North Korea," he said.

Yoo said he expects the South Korean managers will be deported, Pyongyang will convert the park for military use, and the fates of the North Korean workers and their families will not be considered. "It's a wrong decision but they won't change it because it's not their top priority," he said.

Another analyst, however, believes North Korea will reopen the complex after South Korea-U.S. drills end in late April. Cheong Seong-chang at the private Sejong Institute in South Korea said the complex depends on raw materials and even electricity from South Korea. He also noted that workers at the complex are paid in U.S. dollars that North Korea would have a hard time replacing because of international sanctions.

Cheong also thinks that although North Korea would put recalled workers on other projects, it would "face a burden that it has to provide the similar quality of livelihood to them. ... There would be voices calling for the normalization of the Kaesong complex."

South Korea's Unification Ministry, which is responsible for relations with the North, issued a statement saying South Korea will act "calmly and firmly" and will make its best efforts to secure the safety of South Koreans at Kaesong.

The Kaesong complex is the last remaining symbol of inter-Korean rapprochement projects from previous eras of cooperation. Other projects such as reunions of families separated by war and tours to a scenic North Korean mountain became stalled amid confrontation between the rival Koreas in recent years.

Last month, North Korea cut the communications with South Korea that had helped regulate border crossings at Kaesong, and last week it barred South Korean workers and cargo from entering North Korea. Operations continued and South Koreans already at Kaesong were allowed to stay, but dwindling personnel and supplies had forced about a dozen of the more than 120 companies operating at Kaesong to close by Sunday.

Kim, the party secretary, visited the complex Monday. He said in remarks carried by the Korean Central News Agency that Kaesong "has been reduced to a theater of confrontation."

South Korea's Unification Ministry estimates 53,000 North Korean workers in Kaesong received $80 million in salary in 2012, an average of $127 a month.

North Korea objects to portrayals in the South of the zone being crucial to the impoverished country's finances. Kim said North Korea "gets few economic benefits from the zone while the south side largely benefits from it." North Korea has also expressed outrage over South Korean discussion of military rescue plans in the event Pyongyang held the managers hostage.

South Korea's finance minister, Hyun Oh-seok, said the government is looking at ways to help Kaesong firms. South Korea offers insurance to the companies in the event of a shutdown or war.

Daemyung Blue Jeans Inc., which does business in Kaesong, is trying to get in touch with its managers in Kaesong and hadn't spoken with them since Monday morning, CEO Choi Dongjin said. "We have seven (South Korean) workers in Kaesong. We don't know what to do about them," he said by phone from Seoul.

North Korea has unnerved the international community by orchestrating an escalating campaign of bombast in recent weeks. It has threatened to fire nuclear missiles at the U.S. and claimed it had scrapped the 1953 armistice that ended fighting in the Korean War.

The South Korean defense minister said Thursday that North Korea had moved a missile with "considerable range" to its east coast, possibly to conduct a test launch. His description suggests that the missile could be the Musudan missile, capable of striking American bases in Guam with its estimated range of up to 2,490 miles.

Last week North Korea told foreign diplomats based in Pyongyang that it will not be able to guarantee their safety as of Wednesday. Embassy workers appeared to be staying put as of Monday.

North Korea has found itself increasingly isolated. China, its most important ally, expressed unusual disappointment when Pyongyang announced last week that it was restarting a plutonium reactor to produce more nuclear-bomb fuel.

Russian President Vladimir Putin, during a visit to Germany, praised the U.S. for postponing a missile test in California that had been set for this week, in the name of lowering tensions. Putin said at a news conference that a conflict on the Korean Peninsula would make the nuclear disaster at Chernobyl "look like a children's story."

The North's threats against the United States are widely dismissed as hyperbole. North Korea is believed to have a few relatively crude nuclear weapons, but analysts say they've seen no evidence it can build a warhead small enough to put on a missile that could hit the U.S. mainland. A direct attack on the U.S. or its allies would result in retaliation that would threaten the existence of the ruling Kim family in Pyongyang, but there are fears the North might launch a smaller-scale attack.

Another possibility is a fourth nuclear test, or a missile test.

The South Korean defense minister said Thursday that North Korea had moved a missile with "considerable range" to its east coast, possibly to conduct a test launch.

Pyongyang's warning to diplomats prompted South Korean President Park Geun-hye's national security director to say Sunday that North Korea may be planning a missile launch or another provocation around Wednesday, according to presidential spokeswoman Kim Haing.

The possibility of a fourth North Korean nuclear test has existed for some time. South Korea has long said the North prepared two tunnels for a nuclear test, but used only one Feb. 12.

Unification Minister Ryoo Kihl-jae generated confusion about South Korean intelligence on the issue Monday in a parliamentary session. When a lawmaker asked whether there have been increased personnel and vehicles at the North's nuclear test site, and whether that is an indication of nuclear test preparation, Ryoo said "there is such an indication."

After Ryoo's initial comments, South Korean Defense Ministry spokesman Kim Min-seok said no increase in activity has been detected at the site, though he added that North Korea can conduct a nuclear test anytime if decides to do so.

The comments in a parliamentary session were recorded on video, but Ryoo later told lawmakers he couldn't remember making them and didn't mean to say them. He said he was "startled" by reports carrying his earlier comments.