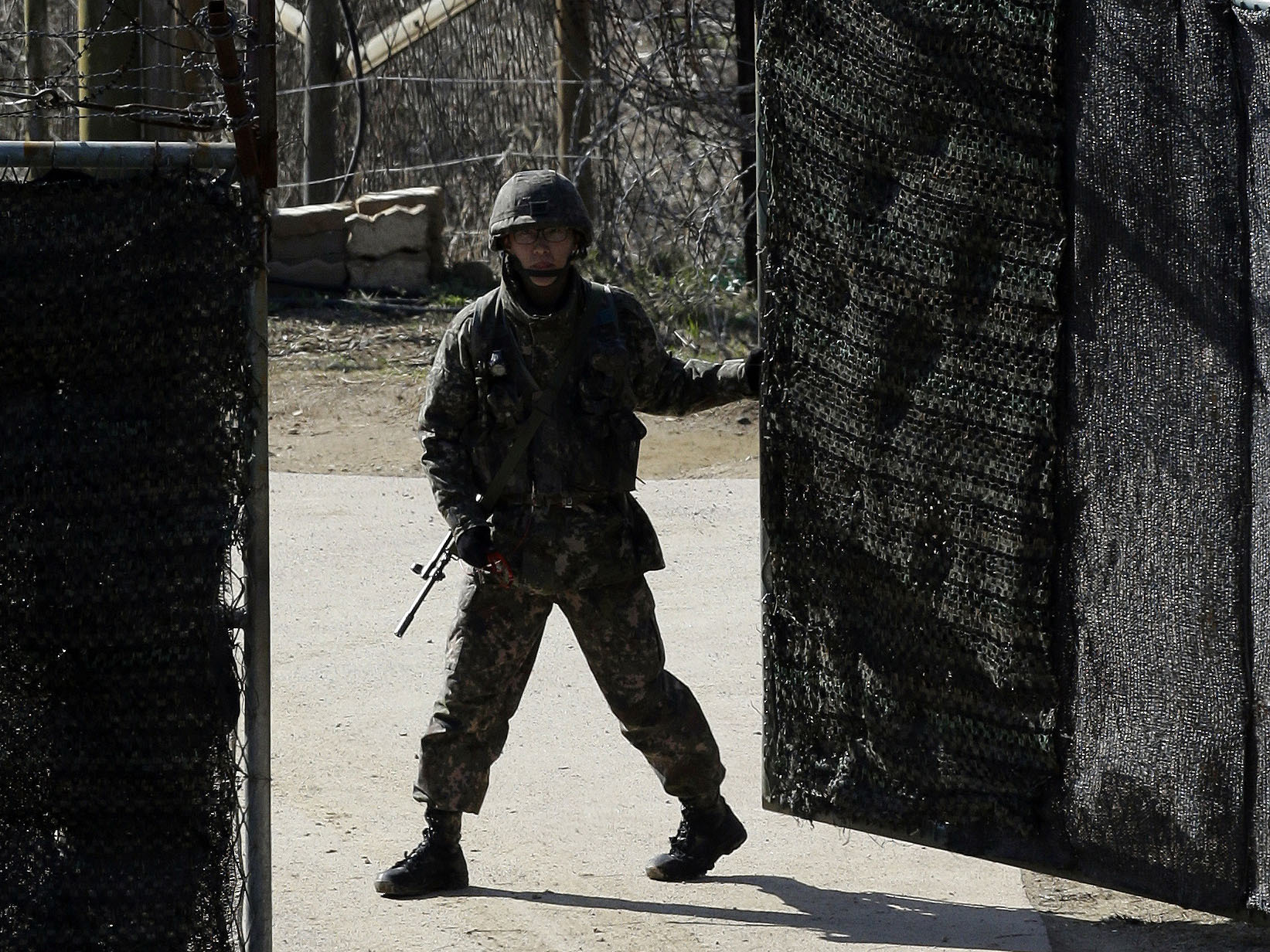 Escalating tensions between North Korea, its neighbor to the south and the U.S. have American officials shifting plans on several fronts, underscoring the unpredictable nature of relations with Pyongyang.

The top U.S. military commander in South Korea, Gen. James Thurman, will not make a planned trip to Washington this week to testify before Congress, a move described by Army Col. Amy Hannah as "a prudent measure." He was scheduled to testify on Tuesday and Wednesday.

That decision comes after a senior defense official told the Associated Press Saturday that Defense Secretary Chuck Hagel decided to delay an intercontinental ballistic missile test that had been planned for this week because of concerns the launch could be misinterpreted and exacerbate the Korean crisis.

A senior official, speaking on condition of anonymity, told Reuters the delay was a "logical, prudent, and responsible course of action to take."

In recent weeks, the U.S. has followed provocations from North Korea with well publicized shows of force connected to the joint exercises with South Korea. It has sent nuclear capable B-2 and B-52 bombers and stealth F-22 fighters to participate in the drills.

In addition, the U.S. said last week that two of the Navy's missile-defense ships were moved closer to the Korean Peninsula, and a land-based missile-defense system is being deployed to the Pacific territory of Guam later this month. The Pentagon last month announced longer-term plans to strengthen its U.S.-based missile defenses.

If those moves were aimed at pressuring North Korea to tone down its rhetoric, they didn't work. Over the last week, tensions have steadily ratcheted up, though U.S. officials have stressed that Pyongyang's bellicose rhetoric, including an announcement that plans for a nuclear retaliation on the U.S. had been approved, is likely just part of a long pattern of bluster aimed at extracting concessions from Washington.

The Wall Street Journal reported Thursday that that the White House had "stepped back" this week from its planned trajectory on how to deal with North Korea's threats.

According to the report, the administration had begun to worry that North Korea, "may be more provoked than the U.S. had intended," according to unnamed officials.

"The concern was that we were heightening the prospect of misperceptions on the part of the North Koreans, and that that could lead to miscalculations," the paper quoted a top White House official as saying.

North Korea's latest moves include the reported positioning of two missiles on launchers somewhere along the country's east coast and warning that it soon will be unable to guarantee diplomats' safety in Pyongyang.

A top South Korean national security official said Sunday that North Korea may be setting the stage for a missile test or another provocative act, but he added that the North's clearest objective is to extract concessions from Washington and Seoul.

On Thursday, South Korea's defense minister described the first missile as one with "considerable range." The country's Yonhap news agency, citing unnamed defense officials, reported Friday that the North had moved a second missile as well.

The defense minister's description suggests that the missile could be the Musudan missile, capable of striking American bases in Guam with its estimated range of up to 2,500 miles.

The accuracy of Musudan missiles, also known as Taepodong X, and even their ability to successfully launch and cruise to any significant distance at all, remains unproven by North Korea. The missiles' capabilities are based on extrapolations of data on earlier versions built by Russia.

North Korea successfully shot a satellite into space in December and conducted its third nuclear test in February. It has threatened to launch a nuclear attack on the United States, though many analysts say the North hasn't achieved the technology to manufacture a miniaturized nuclear warhead that could fit on a long-range missile capable of hitting the U.S.

Regarding a potential missile test, the White House said Friday that the U.S. would "not be surprised to see them take such an action."

During a meeting with other South Korean officials, the official, Kim Jang-Soo, also said the notice to diplomats and other recent North Korean actions are an attempt to stoke security concerns and to force South Korea and the U.S. to offer a dialogue. Washington and Seoul want North Korea to resume the six-party nuclear talks — which also include China, Russia and Japan — that it abandoned in 2009.

The roughly two dozen countries with embassies in North Korea had not yet announced whether they would evacuate their staffs.

British Foreign Secretary William Hague suggested that North Korea's comments about foreign diplomats are "consistent" with a regime that is using the prospect of an external threat to justify its militarization to its people.

"I haven't seen any immediate need to respond to that by moving our diplomats out of there," he told the BBC on Saturday. "We will keep this under close review with our allies, but we shouldn't respond and play to that rhetoric and that presentation of an external threat every time they come out with it."

Germany said its embassy in Pyongyang would stay open for at least the time being.

"The situation there is tense but calm," a German Foreign Office official, who declined to be named in line with department policy, said in an email. "The security and danger of the situation is constantly being evaluated. The different international embassies there are in close touch with each other."

Indonesia's foreign affairs ministry said it was considering a plan to evacuate its diplomats. A statement released by the ministry on Saturday said that its embassy in Pyongyang has been preparing a contingency plan to anticipate the worst-case scenario, and that the Indonesian foreign minister is communicating with the staff there to monitor the situation.

India also said it was monitoring events. "We have been informed about it," said Syed Akbaruddin, spokesman for India's external affairs ministry. "We are in constant touch with our embassy and are monitoring the situation. We will carefully consider all aspects and decide well in time."

Seoul and Washington, which lack diplomatic relations with the North, are taking the threats seriously, though they say they have seen no signs that Pyongyang is preparing for a large-scale attack.

Kim Jang-soo said the North would face "severalfold damages" for any hostilities. Since 2010, when attacks Seoul blames on North Korea killed 50 people, South Korea has vowed to aggressively respond to any future attack.

South Korean Joint Chiefs of Staff Chairman Gen. Jung Seung-jo had planned to meet with his U.S. counterpart, Gen. Martin Dempsey, in Washington on April 16 for regular talks. But tensions on the Korean Peninsula are so high that Jung cannot take a long trip away from South Korea, so the meeting will be rescheduled, a South Korean Joint Chiefs officer said Sunday. The officer spoke on condition of anonymity, citing office policy.

North Korea also raised tensions Wednesday when it barred South Koreans and supply trucks from entering the Kaesong industrial complex, where South Korean companies have employed thousands of North Korean workers for the past decade.

North Korea is not forcing South Korean managers to leave the factory complex, and nearly 520 of them remained at Kaesong on Sunday. But the entry ban at the park, the last remaining inter-Korean rapprochement project, is posing a serious challenge to many of the more than 120 South Korean firms there because they are running out of raw materials and are short on replacement workers.

Nine more firms, including food and textile companies, have stopped operations at Kaesong, bringing to 13 the total number of companies that have done so, South Korea's Unification Ministry said in a statement Sunday.