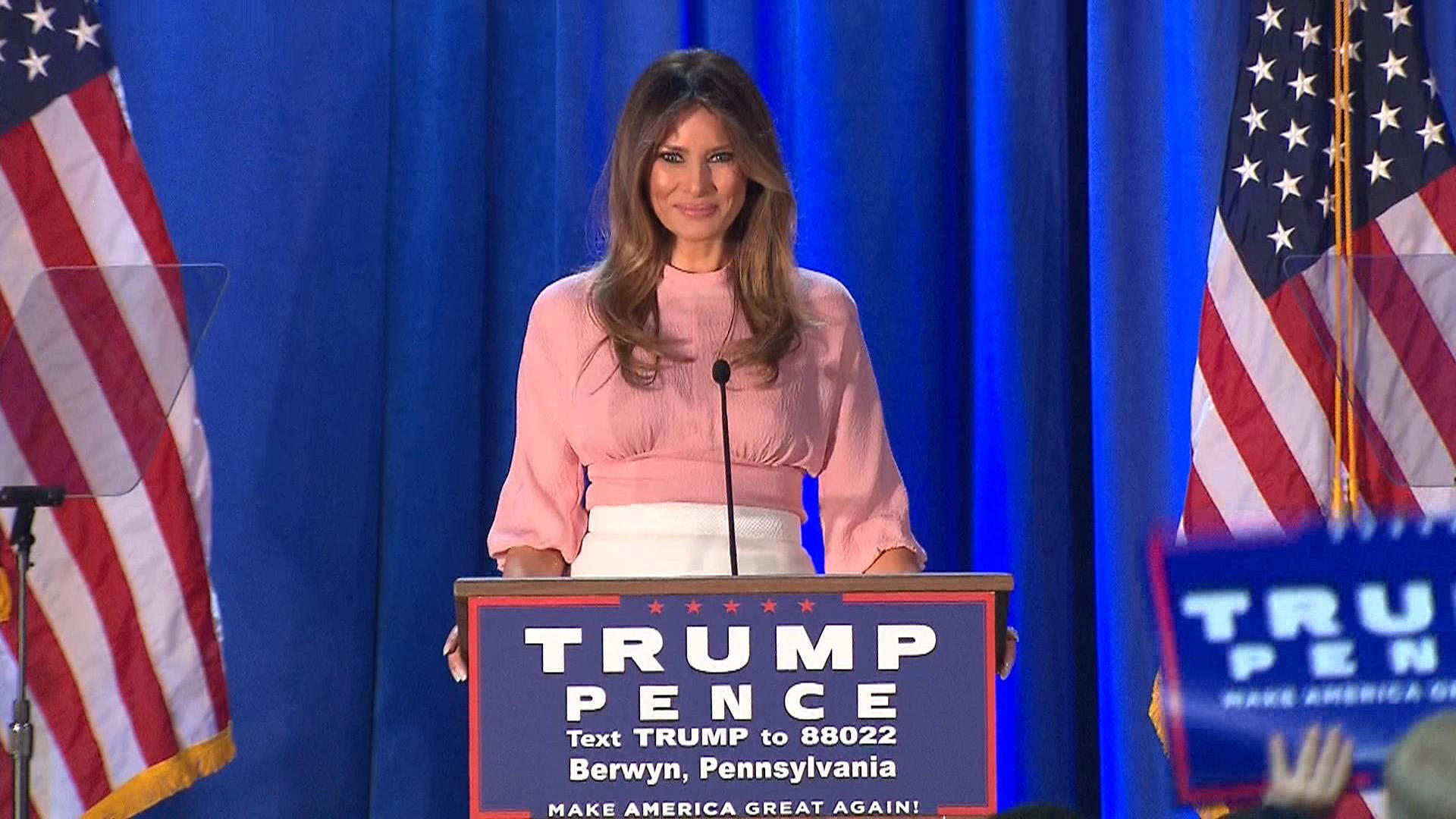 In her first speech since the Republican convention, Melania Trump campaigned for her husband in the Philadelphia suburbs Thursday afternoon, outlining in the clearest terms yet what she’d do as first lady and calling for “respect” and “kindness” in American politics.

“We must win on November 8 and we must come together as Americans,” she told a crowd in Berwyn, Pa., a town in suburban Philadelphia. “We must treat each other with respect and kindness, even when we disagree.”

Trump was introduced by Karen Pence, wife of vice presidential candidate Mike Pence, who referred to her as “America’s next great first lady.”

“I know that America will fall in love with her just as much as she loves the American people,” Pence added.

The countless “Women for Trump” signs in the audience signified the reason for Trump’s event, and the reason it was held in the vote-rich Philadelphia suburbs: this election could see the biggest gender gap in modern political history. Women, especially suburban women, are crucial to victory in states like Pennsylvania—and after weeks of coverage of Donald Trump’s comments about women, especially a 2005 tape in which he uttered the now-infamous phrase “grab her by the p****,” the GOP ticket is struggling with female voters.

After she addressed the Republican convention, it became clear that parts of it were lifted from first lady Michelle Obama’s 2008 speech.  Afterwards, she largely stayed away from the campaign trail until now.

In Pennsylvania, Trump began her speech with a description of her upbringing in then-Communist Slovenia, saying the idea of America inspired thoughts of “freedom” and “opportunity” in her home country.

“Of course we always knew about the incredible place called America,” she said. “America was the word for freedom and opportunity. America meant if you could dream it, you could become it.”

In particular, she gave a nod to former President Ronald Reagan and his “Morning in America,” which was the slogan for his 1984 reelection bid.

“President Reagan’s ‘Morning in America’ was not just something in the United States, it began to feel like morning around the world, even in my small country,” she said. “It was a true inspiration to me.”

Trump spoke about her plans should she become the country’s next First Lady, saying she will be “an advocate for women and for children.” (Hillary Clinton, the Democratic nominee, frequently talks about how she has spent her life fighting for women and families.)

“I want our children in this country, and all around the world, to live a beautiful life, to be safe and secure. To dream freely of love and a family of their own someday,” Trump said. “We need to teach our youth American values: kindness, honesty, respect, compassion, charity, understanding, cooperation.”

She spoke specifically about the dangers of cyberbullying for children and teens, noting that while social media helps ease “isolation” it also has a “bad side.”

“Our culture has gotten too mean and too rough, especially to children and teenagers,” she said.

Trump also said many American women have been “left behind,” saying she would work to improve their lives.

“With opportunity, women will advance and achieve. But some women have been left behind, I see that,” she said. “We cannot call ourselves a fully developed or advanced nation when 50 percent of our women live in poverty, when 60 million are without health insurance … this cannot be.”