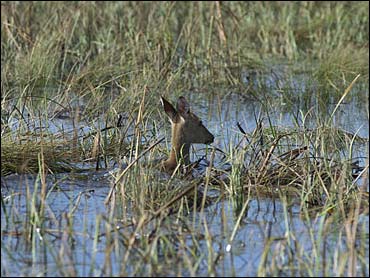 This is a running list compiled by CBSNews.com staffers of the latest developments of Hurricane Rita and the recovery efforts underway on the Gulf Coast. For a look back to fast-breaking events of the Katrina disaster, see our previous blog.

Light sweet crude for November fell 75 cents to settle at $65.07 a barrel on the New York Mercantile Exchange. It had risen $1.63 Monday.

9:43 p.m.
JACKSON, Miss. (AP) — Governor Haley Barbour spoke of a Mississippi "renaissance" when he addressed a special session of the state legislature today.

Barbour told lawmakers he envisions a coastal Mississippi "bigger and better than ever" after it's rebuilt from the ravages of Hurricane Katrina. And Barbour says he's appointing a Commission on Recovery, Rebuilding and Renewal to work with local governments and the private sector to accomplish the goal.

Sharyn Alfonsi on New Orleans responding to accusations from the ex-FEMA director.

8:03 p.m.
HOLGATE, Ohio (AP) — Kevin Muntz thought he could do better than just donating his weekly allowance to children who lost everything in Hurricane Katrina.

So the first-grader came up with the idea of collecting teddy bears and stuffed animals for children in Louisiana.

Through collections at church and school, Kevin amassed 207 stuffed animals during two weeks. They're being sent to his aunt in Zachary, La., who will distribute them at a shelter at her church.

8:00 p.m.
DELISLE, Miss. (AP) — Despite some damaged facilities, no hazardous material leaks have been found at the DuPont facility in this coastal town that was slammed by Hurricane Katrina, Mississippi Department of Environmental Quality officials said Tuesday.

DEQ officials said inspections at the facility in Harrison County since Hurricane Katrina have revealed that the plant site was inundated with water and railcars were pushed off their tracks and onto their sides but no hazardous material releases or leaks were observed.

The onsite landfill for waste disposal remained intact and was not overcome by the storm surge.

7:04 p.m.
PORT ARTHUR, Texas (AP) — Nearly four days after Hurricane Rita hit, many of the storm's sweltering victims along the Texas Gulf Coast were still waiting for electricity, gasoline, water and other relief Tuesday, prompting one top emergency official to complain that people are "living like cavemen."

In the hard-hit refinery towns of Port Arthur and Beaumont, crews struggled to cross debris-clogged streets to deliver generators and water to people stranded by Rita. They predicted it could be a month before power is restored, and said water and sewer systems could not function until more generators arrived.

"I served this department for 26 years and have taken it through some of the toughest times of its history. Every man in a leadership position must know when it's time to hand over the reins," Compass said at a news conference. "I'll be going on in another direction that God has for me."

5:25 p.m.
(AP) — President Bush flew over the largely obliterated Louisiana town of Cameron and circled an offshore oil rig Tuesday in his first up-close look at the devastation that Hurricane Rita brought to the Gulf Coast's oil producing and refining communities.

"This area's hurting," Bush said before an hour-long helicopter tour over the debris-strewn communities along the Texas-Louisiana border where Rita blew ashore. "I saw firsthand how it's hurting."

2:47 p.m.
ATLANTA (AP) — An estimated 5,000 people have shown up for a job fair in downtown Atlanta. Those attending include a mixture of evacuees from hurricanes Katrina and Rita, along with Atlanta area residents who are looking for work.

One 58-year-old woman — Audry Morgan-Martin — is in Atlanta with 28 family members. She is from New Orleans and lost everything during Hurricane Katrina. The word "hurricane" used to have a different meaning for her. The woman was in charge of chopping up fruit for the popular "hurricane" drinks at Pat O'Brien's Bar in New Orleans. She says she will take any job to support herself until she can return to New Orleans.

2:23 p.m.
BEAUMONT, Texas (AP) — President Bush is getting a first-hand look at Hurricane Rita's handiwork as he tours Texas and Louisiana. On his second visit to the states since the storm hit on Saturday, Mr. Bush got a briefing from state officials at the airport in Beaumont, Texas. He then took off on a helicopter tour that'll also include hard-hit Lake Charles, La. Speaking to reporters, Mr. Bush said he's doing his best to support state recovery efforts. He also repeated his plea to evacuees to heed warnings not to return home until power and water are restored.

12:55 p.m.
(CBS) — Although most Congressional Democrats boycotted the special panel for former FEMA Director Mike Brown Tuesday, two did show up — both from regions hit hard by Hurricane Katrina. Reps. William Jefferson of Louisiana and Gene Taylor of Mississippi appeared at the hearing with questions — and reactions — for Brown, who spent his opening statement laying blame on local officials for the post-Katrina disaster-relief problems.

Rep. Gene Taylor, D-Miss., told Brown: "The disconnect was, people thought there was some federal expertise out there. There wasn't. Not from you."

"I find it absolutely stunning that this hearing would start out with you, Mr. Brown, laying the blame for FEMA's failings at the feet of the governor of Louisiana and the Mayor of New Orleans," Jefferson said.

11:09 a.m.
NEW ORLEANS (AP) — The New Orleans police chief says 249 officers — nearly 15 percent of the force — could face a special tribunal because they left their posts without permission during Hurricane Katrina and the storm's chaotic aftermath.

Police Superintendent Eddie Compass plans to assemble a tribunal of four of his assistant chiefs to hear each case and sort the outright deserters from those with a legitimate reason for not showing up for work. Lt. David Benelli, president of the Police Association of New Orleans, the union for rank-and-file officers, said true deserters should be fired.

9:39 a.m.
TRENTON, N.J. (AP) — New Jersey officials say some oil companies and independent gas station owners have tried to take advantage of consumers in the face of disaster. The state is suing Hess, Motiva Shell and Sunoco, saying during Hurricane Katrina they inflated gas prices and raised prices more than the once-a-day legal limit. Some independent gas station operators are also being targeted.

9:02 a.m.
BATON ROUGE, La. (AP) — Hurricane Katrina did what authorities couldn't — put a stop to the illegal drug trade and ruthlessly violent gang activity in New Orleans. Where the gangs went isn't known for sure — but federal authorities suspect popular evacuation sites such as Houston, Baton Rouge and Lafayette.

But no matter where they land, authorities say the big thugs from the Big Easy are now crippled because their buddies have been dispersed and their environments are unfamiliar.

8:30 a.m.
JACKSON, Miss. (AP) — Nearly a month after Hurricane Katrina walloped the state, the future of Mississippi's battered casino industry is one of more than 20 topics on the agenda of a special legislative session.

Gov. Haley Barbour, who campaigned in 2003 on preventing the spread of gambling, is proposing to let coast casinos build on or near the shore as long as they still have facilities touching water. Most of the state's 13 coast casinos were heavily damaged by Katrina. The hurricane's powerful winds and storm surge tossed some of the massive gambling barges ashore and ripped away walls of others, exposing twisted metal skeletons.

6:50 a.m.
(CBS) — President Bush is saddling up for another trip to the hurricane zone Tuesday — this time, Beaumont, Texas, and Lake Charles, La. First lady Laura Bush will also be on a hurricane-related trip – with a twist. She'll be in Biloxi, Miss., visiting a Salvation Army recovery center and will also participate in the filming of the reality show "Extreme Makeover: Home Edition."

6:45 a.m.
(CBS) — Michael Brown, who left his job as FEMA boss under heavy criticism of his qualifications and response to the needs of Katrina's victims, will be on Capitol Hill Tuesday: answering questions about what FEMA did and how things could be done better. Brown's still on the FEMA payroll; a spokesman tells CBS News he'll be there for another two weeks so the agency can get gets a "proper download of his experience."

6:15 a.m.
(AP) — Teams from FEMA have fanned out over a nine-county area of East Texas to deliver food and water and ice. Gov. Rick Perry says the state is projecting Rita's total damage at $8 billion.

At least 16 Texas oil refineries remain closed because of Rita. A refinery in Port Arthur and one in Beaumont are without power, and a second Port Arthur refinery was damaged and could remain out of service for two to four weeks.

In Louisiana, the mayors of Sulphur and Vinton are urging folks who would like to come home to stay away until the sewage systems are repaired, power is back on and hospitals and emergency services have been restored.

"Right now, there's very little to come back to," said Sulphur Mayor Ron LeLeux, of his town where every major power transmission line was destroyed, uprooted trees split houses in two and splintered trees left most streets impassable. Vinton Mayor David Riggins is begging evacuees to stay away for now - because the town is short on the food and water supplies he needed for fire, police and emergency crews.