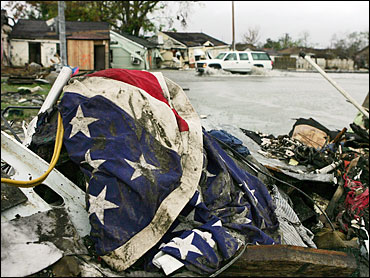 One of the buildings that caught fire was built in 1905, just after the hurricane that destroyed most of Galveston and killed at least six-thousand people.

The Strand District includes historic buildings, night clubs, shops and restaurants. It is also the site of a massive Mardi Gras celebration and a annual Dickens festival.

10:41 p.m.
MIAMI (AP) — An ominous warning from the director of the National Hurricane Center. Max Mayfield says Hurricane Rita's storm surge is going to "clobber" the area near the Texas-Louisiana state line and that people will die there. Rita is expected to come ashore around daybreak as a strong Category 3 storm.

9:48 p.m.
As Rita gets closer to landfall, CBS News correspondent Trish Regan reports from the

road leading from Houston to a shelter
in Huntsville, Texas.

9:20 p.m.
MIAMI (AP) Some 2.8 million people have fled a 500-mile area that could be affected by Hurricane Rita. Traffic has finally eased out of Houston. The Category 3 storm, with winds holding steady at 125 mph is moving closer to shore. Rita is expected to make landfall near daybreak tomorrow along the southwest Louisiana and upper Texas coasts.

Trish Regan on lack of shelter for evacuees

7:23 p.m.
(CBS) — CBS News correspondent Trish Regan reports that nearly 1,000 people plan to ride out the storm in a make-shift shelter at Sam Houston State University, in Huntsville, Texas. Even though they do not have beds, they were the lucky ones as it and other shelters closed their doors. Regan reports that other families who have run out of gas are forced to sleep in their cars tonight on Interstate 45.

7:17 p.m.
(CBS) — Hurricane expert Bryan Norcross of WFOR-TV in Miami said that Rita has picked up speed and is expected to make landfall before sunrise.

"It seems pretty clear that this is going to come very close to the border between Texas and Louisiana," Norcross said. "Bearing in mind it still could veer a little to one side or the other."

The center of the storm is located about 155 miles east-southeast of Galveston, Texas, and hurricane force winds extend outward up to 85 miles from the center.

Rita is expected to make landfall near daybreak tomorrow along the southwest Louisiana and upper Texas coasts. A Hurricane warning is effect from Sargent, Texas, to Morgan City, Louisiana.

To the east, tides are running about two feet above normal along the Louisiana, Mississippi and Alabama coasts in the areas affected by Hurricane Katrina.

Tides in those areas are expected to increase to four to six feet and be accompanied by large waves.

5:07 p.m.
(AP) — Unlike the run-up to Hurricane Katrina, the military is playing an active role before Hurricane Rita churns ashore.

Air Force planes have been used to evacuate thousands of people in Texas and Louisiana, and satellite phones and long-range radios have been sent to areas in the storm's path.

Meanwhile, about 34-hundred soldiers of the Army's 82nd Airborne Division are standing ready for post-Rita relief duty. And Pentagon officials say the military also is preparing to respond to a request to feed as many as 500-thousand people at 15 Texas locations.

The governors of Louisiana and Texas have asked for 25-thousand active-duty troops, but have provided few details on how they might be used.

Instead, he plans to travel directly to Colorado to monitor the storm's progress from U-S Northern Command.

The White House says the change was made because the search and rescue teams Bush planned to meet are being repositioned as the storm shifts toward the northeast.

Earlier today, the president visited the Federal Emergency Management Agency in Washington, where he received a video briefing on Rita from the National Hurricane Center.

2:50 p.m.
WASHINGTON (AP) — Federal officials declared a public health emergency for Texas and Louisiana Friday in anticipation of Hurricane Rita's strike, even as they continued to urge people in the storm's path to get to safety — or hunker down if it's too late to leave. Health and Human Services Secretary Mike Leavitt declared a public health emergency to ease some of the requirements for hurricane victims who seek Medicaid or other assistance after the storm, a spokesman said.

President Bush visited FEMA in Washington before flying later in the day to his home state of Texas.

2:22 p.m.
HOUSTON (CBS) — CBS News correspondent Dan Rather reports that people in Houston have heeded the warnings to evacuate, judging by the city's empty feeling. He says it's hard to imagine today that 5 million people usually live in Houston, because it feels like a ghost town.

2:16 p.m.
(CBS/AP) — Hurricane Rita slowly weakened Friday, moving from a Category 4 to a Category 3 storm as it swept toward the Texas and Louisiana coast with 125 mph winds.

1:05 p.m.
(CBS) — A CBS station in San Francisco reports that members of the U.S. military stationed at a middle school in New Orleans feel haunted. And, apparently, it's not just the mass destruction and dead bodies that are getting to them. CBS5's Janet Yee writes:

12:52 p.m.
IDAHO FALLS, Idaho (AP) — A Pocatello weatherman who gained attention for an unusual theory that Hurricane Katrina was caused by the Japanese mafia using a Russian electromagnetic generator has quit the television station. Scott Stevens' last appearance on KPVI-TV was Thursday.

His departure comes after station officials learned a link labeled "Make a Donation" on Stevens' Web site, www.weatherwars.info, where he expounds on his theory, opened a payment form connected to Stevens' KPVI e-mail address.

12:11 p.m.
WILMER, Texas (AP) — A jammed highway near Dallas is open again after officials hauled the charred wreckage of a bus off the evacuation route. Officials aren't sure of the exact number, but estimate up to 24 people on the bus died. The bus was evacuating nursing home residents as Hurricane Rita approaches. The company that owns the Brighton Gardens nursing home says 38 residents and six workers were on the bus.

11:21 a.m.
CHATTANOOGA, Tenn. (AP) — A man who sought safety from Hurricane Katrina in Tennessee was gunned down in the street and died, possibly during a robbery of his Red Cross relief money. Don Maurice Airline, 24, of Metairie, La., was found on a secluded road with five gunshots to his head. Days before he was killed last week, the American Red Cross gave him a debit card worth several hundred dollars.

11:03 a.m.
WILMER, Texas (AP) — A nurse who was driving behind a bus filled with elderly evacuees from Hurricane Rita says she saw it start to smoke, and then pull to the side of the road. Tina Jones says, "I saw the smoke, and then there was an explosion."

She pulled over and helped treat minor injuries. And she says she saw at least six bodies. After witnessing the horror, Jones says she'll "probably go home and have a good cry."

10:49 a.m.
NEW ORLEANS (CBS/AP) — Dozens of blocks in a New Orleans neighborhood are now under water. The water is pouring over a patched levee, in the form of a waterfall at least 30 feet wide. "Our worst fears came true. The levee will breach if we keep on the path we are on right now, which will fill the area that was flooded earlier," Barry Guidry with the Georgia National Guard.

10:21 a.m.
NEW ORLEANS (AP) — The situation is getting worse in a neighborhood of New Orleans, where the weakened levees are being tested by new rain from Hurricane Rita.

In the lower Ninth Ward, an Associated Press reporter found flooding in a five-block area, as water seeps through and flows over the top of a levee. He says the water is waist-deep in some spots.

9:42 a.m.
WILMER, Texas (AP) — The bus carrying elderly evacuees from Hurricane Rita that caught fire on a gridlocked highway near Dallas, killed as many as 24 people, authorities said.

"Deputies were unable to get everyone off the bus," Dallas County Sheriff's Department spokesman Don Peritz said. He said he believes 24 people were killed, but that number could change.

The bus was engulfed with flames, causing a 17-mile backup on a highway that was already heavily congested with evacuees from the Gulf Coast. Dallas television station WFAA reported 20 people were killed. "There were 45 souls on the bus ... at this point we believe we have about half accounted for," Dallas County sheriff's spokesman Sgt. Don Peritz said.

"The early indications are this is a mechanical issue. The driver did survive the accident," Peritz said. "It's my understanding he went back on the bus several times to try to evacuate people." He said there were indications that oxygen used by elderly evacuees could have had a role in the fire.

8:32 a.m.
(CBS) — President Bush will go to Texas later today to visit with first responders on stand-by to move emergency supplies into the disaster zone, CBS News correspondent Mark Knoller reports. Mr. Bush will end the day at U.S. Northern Command headquarters in Colorado Springs, Colo., to monitor the impact of the storm.

The bus was engulfed with flames, further hampering a 17-mile backup on a heavily congested freeway filled with evacuees from the Gulf Coast. officials say one person was killed and 12 were injured.

7:15 a.m.
WASHINGTON (AP) — Before Hurricane Katrina, they were among the poorest of America's poor. In the hardest hit counties, some 305,000 people not only lived in poverty, their families' income fell below 50 percent of the poverty line about $7,500 for a family of three.

Now, many live in strange towns with only a few dollars in their pockets.

They've become a new class of poor, one that makes the old class look well off by comparison. They have not only lost their jobs and their homes; they're also isolated from family and friends, putting them at great risk for depression and substance abuse.

5:35 a.m.
LAKE CHARLES, La. (AP) — Houston's I-45 isn't the only traffic jam filled with Hurricane Rita evacuees. I-10 is congested across southern Louisiana.

Janell LeDoux and her husband spent six hours on the freeway and covered just 80 miles from their home near Lake Charles east to Lafayette. And they were only halfway to her sister's house in eastern Louisiana. "I just hope we have something left to go home to. Not like in New Orleans," she said. Four gas stations in Lafayette had run dry. A fifth station had only premium. Billy Landry, a marina manager in Cypremort Point, wasn't going to stay for Rita. He planned to haul himself and thousands of soft-shell crabs to safety. "Since Katrina, everybody seems a little nervous. They don't want to get pulled from rooftops," he said.

5 a.m.
HOUSTON (AP) — University of Houston officials have told the football team to pack for a lengthy trip with Hurricane Rita bearing down on the Texas Gulf Coast. What they don't know is where they'll go.

The original plan was to bus the football team, coaches and support staff — about 125 people — to Sheppard Air Force Base in Wichita Falls, Texas. That plan fell through when the state would not authorize the team's move to the base. The Cougars lost their ride when the bus company informed them that they had no drivers for the five buses the school hired.

"It's left us in a real quandary," said Houston athletic director Dave Maggard. The team's Plan B was a charter plane to Tulsa; no word yet on whether that will work.

Hotels in Monterrey have agreed to lower room rates by 20 to 30 percent for anyone from the Texas Gulf Coast wanting to take shelter. A toll-free line, 1-800-554-5123, is staffed with bilingual operators to help people find rooms.