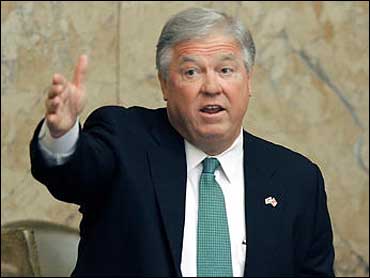 Governor Haley Barbour spoke of a Mississippi "renaissance" when he addressed a special session of the state legislature today.

Barbour told lawmakers he envisions a coastal Mississippi "bigger and better than ever" after it's rebuilt from the ravages of Hurricane Katrina. And Barbour says he's appointing a Commission on Recovery, Rebuilding and Renewal to work with local governments and the private sector to accomplish the goal.

Barbour said one proposal he backs would allow casinos to be built "on shore" but only if they have facilities at the water's edge. He said Katrina taught him it would be "irresponsible" to rebuild floating casinos as they were.

The governor also said the state needs the federal government's help to rebuild the state's infrastructure to make it stronger and more secure against future hurricanes.

Most of the state's 13 coastal casinos were heavily damaged when Katrina struck Aug. 29. The hurricane tossed some of the massive gambling barges ashore and ripped away walls of others.

Mississippi legalized casinos in 1990 but restricted them to the waters of the Mississippi River or the Gulf of Mexico.

"We have learned the hard way that making them float on water is not a good idea," Barbour said Monday.

Barbour, who campaigned in 2003 on preventing the spread of gambling, wants to allow the building of casinos on land, as long as they still have facilities touching water.

Religious groups such as the Mississippi Baptist Convention and the American Family Association are lobbying against any change in the casino laws.

As lawmakers arrived for the session, three men from Brookhaven's Church of the Lord Jesus Christ stood outside to protest against gambling.

A Mississippi law enacted earlier this year allows casinos to build on pilings to provide some protection during storms, but none of them had time to do so.

Barbour is putting numerous other issues before lawmakers during the special session, including a proposal to create a loan program for small businesses.