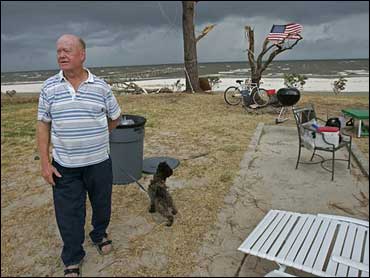 8:32 p.m.
NEW YORK (AP) — Television networks are plotting their coverage of Hurricane Rita with the lessons of Katrina fresh on their minds.

As cable news screens repeatedly showed satellite views of Rita as a swirling orange blob in the Gulf of Mexico on Thursday, network stars like Brian Williams, Charles Gibson, John Roberts, Matt Lauer, Shepard Smith, Anderson Cooper and Stone Phillips were either in place or traveling to where the storm might make landfall.

"Just as the enormity of Katrina has created a new context for Rita, it has also done so for us," CBS News President Andrew Heyward said.

8:15 p.m.
NEW ORLEANS (AP) — In a grim opening salvo from Hurricane Rita, a steady rain began falling Thursday on New Orleans for the first time since Katrina laid waste to the city, and engineers rushed to shore up the broken levees for fear of another ruinous round of flooding.

The forecast called for 3 to 5 inches of rain in New Orleans in the coming days. That is dangerously close to the amount engineers said could send floodwaters pouring back into neighborhoods that have been dry for less than a week.

7:31 p.m.
KNOXVILLE, Tenn. (AP) — The Tennessee-LSU game scheduled for Saturday has been postponed to Monday because of Hurricane Rita that is threatening the Gulf coast, Southeastern Conference commissioner Mike Slive announced Thursday.

5:51 p.m.
(AP) — Hurricane Rita has the potential to flood an area almost twice the size of New Orleans when it reaches shore early Saturday, causing tens of billions of dollars in damage to the Houston metropolitan area and plunging yet another major Gulf Coast metropolis into disarray.

A study performed last year by the engineering firm Dodson & Associates found that a Category 5 storm could inundate 369 square miles of Harris County, which contains Houston and some of its suburbs. The study estimated the total cost of a worst-case storm at $80 billion, with 75 percent due to flooding and the rest from wind damage.

Before Rita hits, Knoller reports Mr. Bush will head to the Northern Command headquarters in Colorado to track the military response once Katrina makes landfall.

Sept. 22, 2005
2:45 p.m.
IDAHO FALLS, Idaho (AP) — An Idaho weatherman says Japan's Yakuza mafia used a Russian-made electromagnetic generator to cause Hurricane Katrina in a bid to avenge itself for the Hiroshima atom bomb attack — and that this technology will soon be wielded again to hit another U.S. city.

Meteorologist Scott Stevens, a nine-year veteran of KPVI-TV in Pocatello, said he was struggling to forecast weather patterns starting in 1998 when he discovered the theory on the Internet. It's now detailed on Stevens' Web site, the Idaho Falls Post Register reported. Scientists discount Stevens' claims as ludicrous.

Attorney General Charles Foti says the suspects entered an Internet chat room and started conversations with investigators posing as teenage girls. The investigators claimed they had lost their parents. Foti says all six suspects tried to set up dates with the agents.

2:12 p.m.
CAPITOL HILL (AP) — California Congressman Tom Lantos says a number of pet owners may have died during Hurricane Katrina because they wouldn't have been allowed to take their pets with them if they left.

Lantos and Congressmen Chris Shays of Connecticut and Barney Frank of Massachusetts are co-sponsoring a bill that would require provisions for household pets and service animals in order to get FEMA funding.

National Humane Society officials estimate that while more than 6,000 pets have been saved in Mississippi and Louisiana, tens of thousands may still be abandoned.

Meanwhile, Texas officials are credited with being more understanding about people taking their pets as they flee ahead of Hurricane Rita.

Jennifer Donelan reports on winds picking up in New Orleans

Trish Regan on Houston residents getting ready for the storm

12:51 p.m.
The Houston Chronicle reported that residents can expect disruptions to communications, especially cell phones. Callers in the Houston area were already experiencing "all circuits are busy" messages because of congestion on parts of cellular networks.

Cell phone companies are urging callers to keep their phone calls brief, and use text messaging whenever possible, because text messages use less bandwidth and are routed differently than voice calls.

"For the duration of the storm we plan to continue publishing a paper each day," he said. "However, it will be small. Our ability to deliver it is very limited."