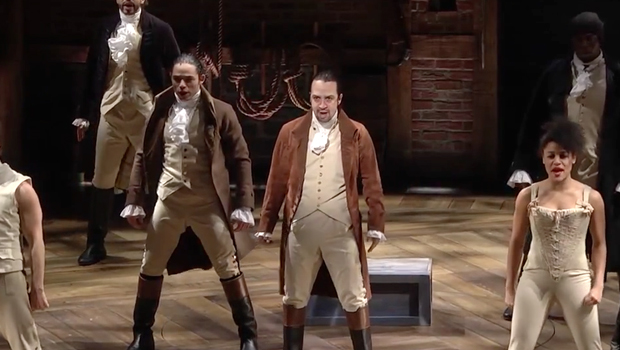 Tonight the Tony Award is widely expected to belong to "Hamilton," the musical based on his life story. Mo Rocca tells us all about the hottest and most talked-about show on Broadway:

(An earlier version of this story was originally broadcast on March 8, 2015.)

"How does a bastard, orphan, son of a whore
And a Scotsman, dropped in the middle of a forgotten spot
In the Caribbean, by Providence impoverished, to squalor
Grow up to be a hero and a scholar?"

When Lin-Manuel Miranda sings about the drive of the "young, scrappy and hungry" immigrant, he's not singing about just any immigrant. He's singing about the man on the 10-dollar bill -- Alexander Hamilton, the revolutionary, visionary, and youngest of the founding fathers.

"This is a guy who, on the strength of his writing, pulled himself from poverty into the revolution that helped create our nation, and caught beef with every other founding father," said Miranda. "I mean, there's great drama; there's a great love story; there is incredible political intrigue."

In other words, a life made for the stage.

When we first met Miranda, "Hamilton" -- the musical he wrote and stars in -- was still off-Broadway, at New York's Public Theater. Now it's a smash on Broadway, winner of a Grammy and a Pulitzer, and nominated for a record-breaking 16 Tony Awards.

And it's no exaggeration to say it's a cultural phenomenon.

The show tells the story of Hamilton's life, and death at the hand of Vice President Aaron Burr (played by Leslie Odom Jr.). And it's put to music that's as energetic as the man and the times he lived through.

"We take it as a given that hip hop music is the music of the revolution," said Miranda.

"Hey, yo, I'm just like my country
I'm young, scrappy and hungry
And I'm not throwing away my shot."

For Miranda, an urban sound made perfect sense for Hamilton's story.

"Is that because of the energy?" Rocca asked.

"It's because of the energy," said Miranda. "It's because the hip hop narrative is of writing your way out of your circumstances.

"I joked to someone else, I think all my favorite hip hop songs are really good musical theater 'I want' songs. I wanna get somewhere else. I wanna get my corner of the sky."

That certainly describes Alexander Hamilton. Born out of wedlock in the Caribbean and abandoned by his father, Hamilton was just 22 when he served as General Washington's aide-de-camp during the Revolutionary War, and 34 when he became the country's first Secretary of the Treasury.

"I think that this is a classic immigrant story in terms of someone recognizing the opportunities in this brand new, turbulent, wide-open society," said Ron Chernow, who wrote the Hamilton biography that inspired Miranda.

"He's the ultimate immigrant, and he's the original immigrant!" laughed Cernow. "I daresay he made the greatest contribution of any immigrant in the history of the United States."

Miranda's own parents came to New York from Puerto Rico.

"My father came here the same age as Hamilton," said Miranda. "He'd already graduated college by 18, and he came with a full ride for NYU's post-doc psychology program. Didn't speak English, and learned it here while he was studying. And writing this story has helped me understand him."

Much has been made of the fact that the cast of "Hamilton" neither sounds nor looks like the founding fathers. It is, said Miranda, "the story of America then told by America now. It looks like America now."

This was a time when the political could get extremely personal. Here's Hamilton (who favored more federal power) debating Thomas Jefferson (who favored states' rights):

"If we assume the debts, the union gets
A new line of credit -- a financial diuretic
How do you not get it?
If we're aggressive and competitive
The union gets a boost. You'd rather give it a sedative?"

"So it makes perfect sense that Hamilton and Jefferson are arguing about the role of the federal government in the form of a rap smackdown," said Rocca.

After Hamilton was slain by Aaron Burr in their 1804 duel, Alexander Hamilton was mourned as a hero, his life's journey as improbable as the musical written about him.

"The way I hold a $10 bill is different now because, like, that's my dude!" said Miranda.