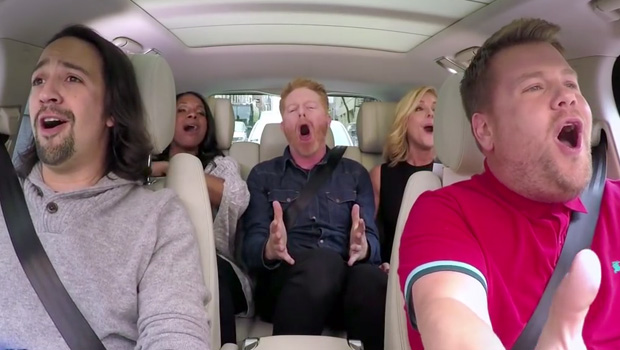 No road rage here: “Late Late Show “ host James Corden, who is emceeing this year’s Tony Awards ceremony (airing on CBS on Sunday, June 12), brought his trademark “Carpool Karaoke” to the streets of New York City, where -- by pure serendipity! -- he was able to offer rides to some of Broadway’s leading luminaries.

Riding along with Corden are the stars of four of this year’s most acclaimed productions:

Lin-Manuel Miranda, the creator and star of the musical “Hamilton,” nominated for a record 16 Tonys;

Six-time Tony-winner Audra McDonald, starring these year in the musical “Shuffle Along”;

and Jane Krakowski, nominated for a Best Featured Actress in a Musical Tony for “She Loves Me.”

The 70th Annual Tony Awards, presented at the Beacon Theatre, will be broadcast on CBS on Sunday, June 12 at 8 p.m. ET.