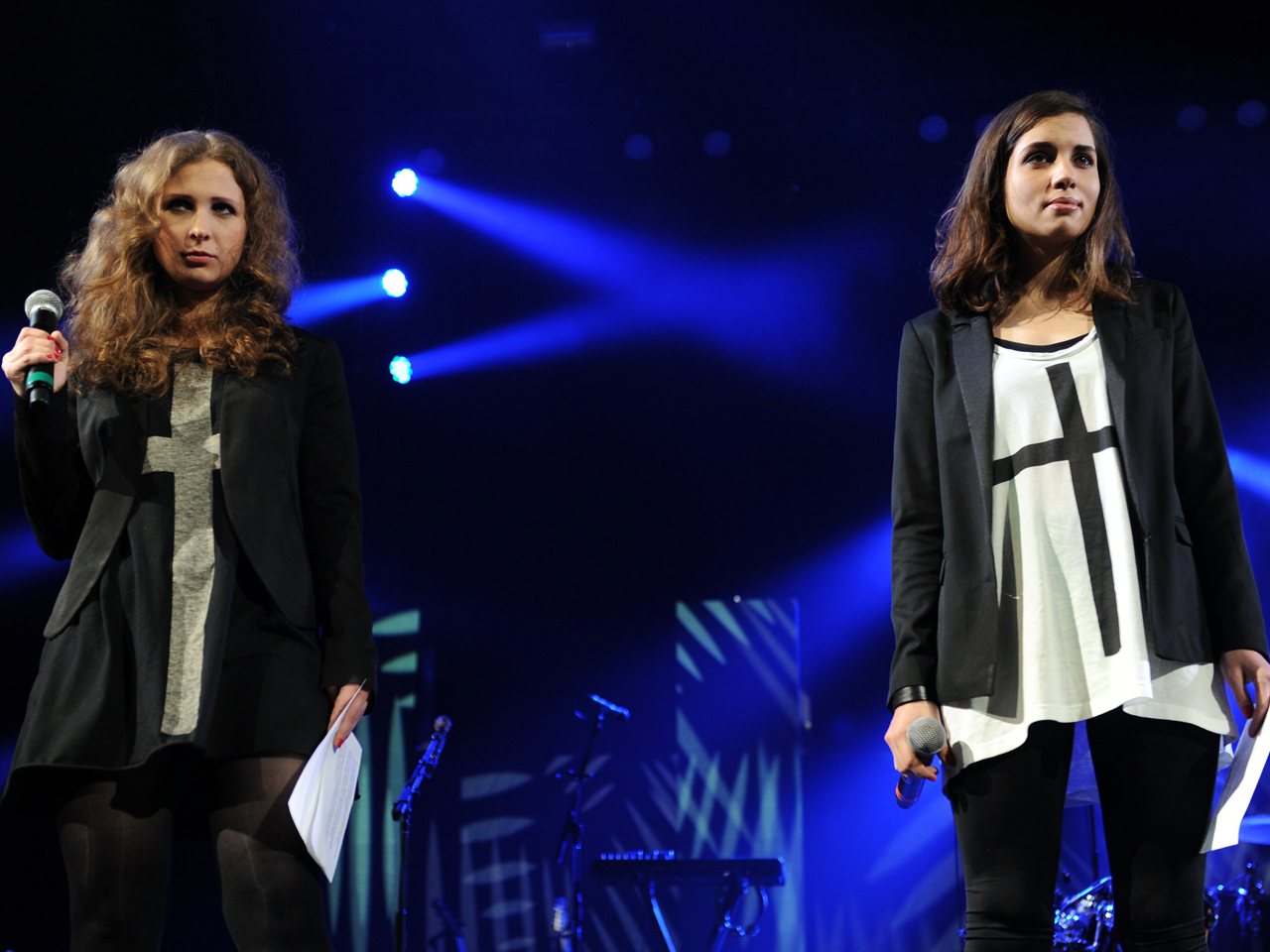 Madonna, Yoko Ono and the band Imagine Dragons all joined forces with two women jailed in Russia for their music and their politics. They used a concert Wednesday night to demand a boycott of the Sochi Winter Games.

The three-hour-long benefit concert was for Amnesty International, and the highlight came toward the end of the event, when members of the Russian female punk band Pussy Riot took to the stage and called for a free Russia.

When Madonna introduced two members of the Russian band - Nadya Tolokonnikova and Masha Alyokhina - Wednesday night in Brooklyn, the crowd erupted in applause as the women made clear their feelings for Russian President Vladimir Putin and the Sochi Winter Olympics.

Three of the band members were arrested in 2012 for a performance on the altar at Moscow's largest orthodox cathedral, where the women spewed obscenities and criticized Putin's crackdown on political protesters. They were charged with hooliganism.

For their crime, Tolokonnikova and Alyokhina were sentenced to two years behind bars.

In New York, Alyokhina said through a translator, "Anybody can be Pussy Riot; you just need to put on a mask and stage an act of protest against something in your particular country."

Last December, amid international outrage, they were freed. Band members called it a public relations stunt to distract from Russia's history of human rights abuses.

Tolokonnikova said through a translator, "We are just two individuals that spent two years in jail for taking part in a Pussy Riot protest action, and ... no we don't regret doing what we did."

The women have had a history of staging provocative performances throughout Russia, including one in Moscow's Red Square.

In an interview last year in Russia with Lesley Stahl of "60 Minutes," another band member spoke about their mission.

Stahl asked, "But are you advocating the overthrow of this government here?"

Katya Samutsevich, through a translator, replied, "Yes. We want the government to leave power because we consider it illegitimate. But we're advocating for a peaceful overthrow."

Earlier this week, they brought their anti-Putin message to Comedy Central's "The Colbert Report."

Tolokonnikova said through a translator, "We have different ideas about a bright future, and we don't want a shirtless man on a horse leading us."

Elaine Quijano added on "CBS This Morning" Thursday that six members of the band posted a letter on their blog calling out the two women who appeared at Wednesday's concert. They say the women are no longer members of Pussy Riot and have undermined the ideals of the group who "only stage illegal performances in unexpected places."
View CBS News In
CBS News App Open
Chrome Safari Continue
Be the first to know
Get browser notifications for breaking news, live events, and exclusive reporting.