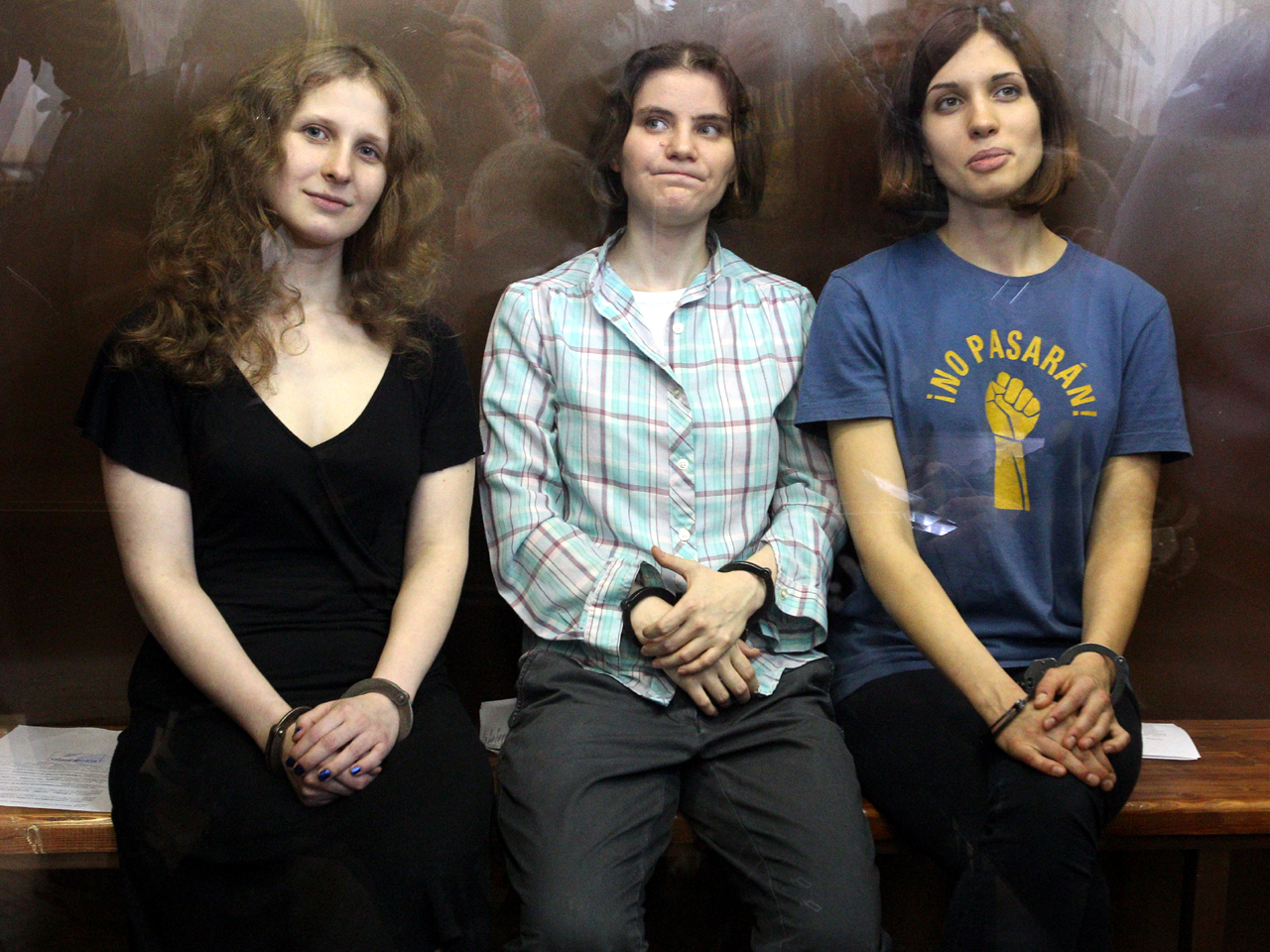 (CBS/AP) MOSCOW - A Moscow judge sentenced three members of the provocative punk band Pussy Riot to two years in prison on hooliganism charges on Friday following a trial seen around the world as an emblem of Russia's intolerance of dissent.

The trial inspired a wave of small but raucous protests across Europe and North America in support of the feminist rockers, who have been dubbed prisoners of conscience by Amnesty International. Hundreds of Pussy Riot supporters waiting outside the Moscow courtroom chanted "down with the police state" when the sentence was announced. Dozens were detained, including several opposition leaders.

The three women were arrested in March after a February guerrilla performance in Moscow's main cathedral where they high-kicked and danced while singing a "punk prayer" pleading with the Virgin Mary to save Russia from Vladimir Putin, who was elected to a third term as Russia's president two weeks later.

Judge Marina Syrova said in her verdict that the band members "committed hooliganism driven by religious hatred." She rejected the women's arguments that they were protesting the Orthodox Church's support for Putin and didn't intend to offend religious believers.

Nadezhda Tolokonnikova, 22, Maria Alekhina, 24, and Yekaterina Samutsevich, 30, stood in handcuffs in a glass cage in the courtroom for three hours as the judge read the verdict. They smiled sadly as the judge recounted testimony of prosecution witnesses accusing them of sacrilege and "devilish dances" in church.

Tolokonnikova laughed out loud when the judge read the testimony of a psychologist who said that her "active stance on social issues" was an anomaly.

The three women remained calm and kept smiling after the judge announced the sentence. Someone in the courtroom shouted "Shame!" They waved at relatives from behind the glass.

Samutsevich's father said he met with his daughter before the court session and she was prepared for a prison sentence. "We tried to comfort her," said Stanislav Samutsevich.

The charges carried a maximum penalty of seven years in prison, although prosecutors had asked for a three-year sentence.

When they called the band Pussy Riot and began performing in-your-face protest-punk, they knew they'd draw some attention, CBS News correspondent Charlie D'Agata reports. That was the point.

But when they chose the most sacred site in the Russian Orthodox Church to bang out a flash protest song against Putin, Russian authorities decided it was time for a crackdown.

D'Agata reports the band's cause was taken up by artists and musicians around the globe who saw the case as part of Putin's wider attempts to crush the protest movement and free speech, including the Red Hot Chili Peppers and Paul McCartney, who posted a message to Twitter Thursday saying:

"I hope you can stay strong and believe that I and many others like me who believe in free speech will do everything in our power to support you and the idea of artistic freedom."

Madonna recently performed with the name of the band on her back.

"They have done something courageous," she said. "I think they have paid the price for this act, and I pray for their freedom."

The remaining members of the band had said that, whatever the outcome, women in Russia and beyond should grab a facemask, gather together and cause a riot of their own in support.

Putin himself had said the band members shouldn't be judged too harshly, creating expectations that they could be sentenced to time served and freed in the courtroom. This, however, would have left the impression that Putin had bowed to public pressure, something he has resisted throughout his 12 years in power.

"Putin has doomed himself to another year and a half of international shame and humiliation," said Boris Akunin, one of Russia's most popular authors, who was among the Pussy Riot supporters outside the courthouse. "The whole thing is bad because it's yet another step toward the escalation of tensions within society. And the government is absolutely to blame."

Defense lawyers said they would appeal the verdict, although they had little hope that it would be overturned. "Under no circumstances will the girls ask for a pardon (from Putin)," said Mark Feygin. "They will not beg and humiliate themselves before such a bastard."

Outside the court, police rounded up a few dozen protesters, including former world chess champion Garry Kasparov, who is a leading opposition activist, and leftist opposition group leader Sergei Udaltsov.

When a prison bus drove the three women away, hundreds of supporters cheered their support.

Amnesty International strongly condemned the court's ruling, saying it "shows that the Russian authorities will stop at no end to suppress dissent and stifle civil society." Western governments criticized the sentence, with the U.S. State Department and German Chancellor Angela Merkel calling it disproportionately harsh.

"We urge Russian authorities to review this case and ensure that the right to freedom of expression is upheld," State Department spokeswoman Victoria Nuland said in a statement.

White House spokesman Josh Earnest said, "The United States is disappointed by the verdict, including the disproportionate sentences that were granted."

The Pussy Riot case has stoked the resentment of opposition partisans who have turned out for a series of huge anti-Putin rallies since last winter.

Alexei Navalny, a key leader behind those protests, condemned the verdict as a "cynical mockery of justice" and said the opposition will step up its protests.

Even some Kremlin loyalists strongly criticized the verdict. Finance Minister Alexei Kudrin said it has dealt "yet another blow to the court system and citizens' trust in it" and has hurt Russia's image in the eyes of investors.

Mikhail Fedotov, the head of a presidential advisory council on human rights, criticized the verdict and voiced hope that the sentence will be repealed.

The Pussy Riot case has underlined the vast influence of the Russian Orthodox Church. Although church and state are formally separate, the church identifies itself as the heart of Russian national identity and critics say its strength effectively makes it a quasi-state entity. Some Orthodox groups and many believers had urged strong punishment for an action they consider blasphemous.

The head of the church, Patriarch Kirill, has made no secret of his strong support for Putin, praising his presidencies as "God's miracle," and he described the performance as part of an assault by "enemy forces" on the church. He avoided talking to the media as he left Warsaw's Royal Castle following a ceremony in which he and the head of Poland's Catholic Church called for mutual forgiveness and reconciliation.

The judge relied extensively on the testimony of church laymen, who said they were offended and shocked by the band's stunt. "The actions of the defendants reflected their hatred of religion," Syrova said in the verdict.

The Orthodox Church said in a statement after the verdict that the band's stunt was a "sacrilege" and a "reflection of rude animosity toward millions of people and their feelings." It also asked the authorities to "show clemency toward the convicted in the hope that they will refrain from new sacrilegious actions."

The case comes in the wake of several recently passed laws cracking down on opposition, including one that raised the fine for taking part in an unauthorized demonstrations by 150 times to 300,000 rubles (about $9,000).

Another measure requires non-government organizations that both engage in vaguely defined political activity and receive funding from abroad to register as "foreign agents."