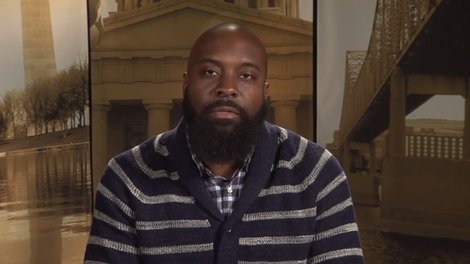 FERGUSON, Mo. -- The father of slain Missouri teenager Michael Brown appeared in a video Thursday pleading for calm after a grand jury decides whether or not to indict Ferguson police officer Darren Wilson.

Michael Brown Sr., expressed his thanks to those who have supported his family since his son was shot and killed on Aug. 9. But Brown also spoke out against any potential violence that could come if the grand jury decides not to recommend Wilson faces criminal charges.

"Hurting others or destroying property is not the answer," Brown said. "No matter what the grand jury decides, I do not want my son's death to be in vain. I want it to lead to incredible change, positive change. Change that makes the St. Louis region better for everyone."

The video, released by STLForward.com, is one of several featured on the site with community leaders addressing the region's social challenges.

A grand jury decision in the case is said to be imminent, although authorities have not specified a date for an announcement.

After Brown's death, protesters took to the streets of Ferguson in mainly peaceful demonstrations, which flared into looting and property damage on several nights with some people throwing rocks and Molotov cocktails.

Police armed in riot gear and using military vehicles responded by firing tear gas and smoke canisters into crowds of demonstrators, triggering an outcry over the militarization of small, local police departments across the U.S.

Local, state and federal authorities have been preparing for the grand jury's announcement for months, in anticipation of renewed protests. On Monday, Gov. Jay Nixon declared a state of emergency and activated the National Guard to help with security.

Protests have been nearly constant since the shooting. The vast majority of protesters want to see the officer charged with murder, although a handful of demonstrations have been in support of Wilson.

Many activists are also pushing for widespread changes in the way police and the courts interact with minorities. On Wednesday, Nixon introduced a 16-member Ferguson Commission, which will recommend ways to address the underlying social and economic conditions that contributed to the unrest.