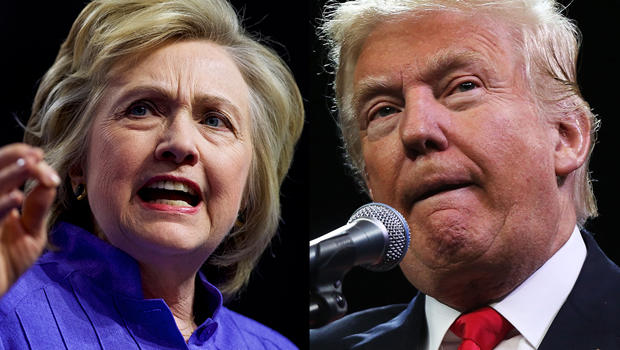 The time has come this campaign season to take a look at THE BIG PICTURE. How did we get to where we are? And where does the country go once the dust has settled, if ever? Our Cover Story is reported by Martha Teichner:

Looking back, this should have told us what we were in for: No one had ever entered a presidential race quite the way Donald Trump did in June 2015, via escalator. You couldn’t look away.

Trump the billionaire-turned-reality TV show celebrity was just about the last person Hillary Clinton expected to be going to the wire against, in what has become a campaign so ugly, Americans just want it to be over.

Clinton: “I mean really. Can we just stop for a minute and reflect on the absurdity of Donald Trump finding fault with Miss Universe?”

So with the end in sight (maybe), what better time to step back and consider what exactly it is we’ve been witnessing for the last year-and-a-half.

“This country is in turmoil,” said noted presidential historian Douglas Brinkley. “It’s a battle between outsiders and insiders, between elites and the people in the heartland. There’s a kind of pitchfork-mob anger going on out there.”

Like the battle of the titans, Donald Trump and Hillary Clinton have gone at each other across an ideological chasm.

Trump: “I want to build a wall. We need the wall.”
Clinton: “I don’t want to rip families apart.”
Trump: “We have some bad hombres here and we’re going to get them out.”
Clinton: “I don’t want to see the deportation force that Donald has talked about in action.”
Trump: “Muslims have to report the problems when they see them.”
Clinton: “It’s also very short-sighted, and even dangerous, to be engaging in the kind of demagogic rhetoric that Donald has about Muslims.”

Teichner asked, “When you look at issues versus personalities, ultimately what’s this election about?”

“2016 is about which is the worst of two evils,” Brinkley replied. “The lack of enthusiasm for Hillary Clinton and Donald Trump is profound.”

Polls show that Trump and Clinton are the most unpopular presidential candidates in polling history. In a campaign about negatives, Clinton v. Trump comes down to trust v temperament.

“Nobody really knows what all these emails add up to in the end,” said Brinkley, “except whenever it’s raised, Hillary Clinton gets deeply defensive, and it gave a taint on her that she is a candidate that is running with the FBI in pursuit of her.”

Brinkley added, “People hate Donald Trump because he’s prejudiced. He says bigoted remarks, he often speaks from a bully pulpit of ignorance, [and] he degrades women.”

How many times have you heard, “There’s never been a campaign like this one”?

Joseph Cummins, who has written “Anything for a Vote” (Quirk Books), a history of dirty tricks and cheap shots in U.S. elections, says 2016 is somewhat unique: “You have an unprecedented situation where you have one candidate, Donald Trump, claiming that the other candidate should be in jail, that’s actually one part of this current election that we haven’t seen before.

“A dirty election runs in our blood; this is part of being American. I like to say about this election that it’s really a 19th century election that’s occurring in the 21st century.”

Consider the election of 1800, when Thomas Jefferson ran against John Adams: “Jefferson hired a scurrilous Scottish writer named James Callender to accuse John Adams of being a ‘hideous hermaphrodite which has neither the force nor the firmness of a man, nor the gentleness and sensitivity of a woman.’ John Adams and his people for their part were already spreading rumors that Thomas Jefferson was sleeping with slaves in Monticello (which in fact he was). They also used one of my favorite all-time slurs in American election campaigns by simply saying, ‘Well, you can’t vote for Thomas Jefferson because he’s dead. And how can you vote for a dead man?’”

As for Trump’s claim that the election is rigged, before it actually happens? “That’s something that we haven’t seen before in American elections,” Cummins said.

Clinton: “There was even a time when he didn’t get an Emmy for his TV program three years in a row and he started tweeting that the Emmys were rigged.”
Trump: “I should have gotten it.”

“The only truly stolen, rigged election in American history was 1876, which is the dirty election of all time, where you had Rutherford B. Hayes, the Republican, running against Samuel Tilden, the Democrat.”

Tilden was ahead. This was the post-Civil War Reconstruction period, when the Republicans controlled the South.

So what did they do?

“They basically telegraphed the people who counted the electoral votes in Florida, in Louisiana and South Carolina, and they said, ‘Change those votes, make those Republican votes and not Democratic votes,’” said Cummins.

“So someone messed with the votes?”

“Literally, yes. This was the one election in American history that it can be proven it was stolen.”

And so Republican Rutherford B. Hayes became our 19th president.

Proof: The first Clinton-Trump debate was the most-watched in TV history, with 84 million viewers.

But Trump never misses a chance to launch a full-throated attack on the media. NBC correspondent Katy Tur has been a frequent punching bag, even requiring Secret Service protection.

Has Trump actually been treated unfairly? “The most distinctive thing about Trump’s coverage is how much there is of it,” said George Mason University professor Robert Lichter. His studies of media bias are often cited by conservatives. “Trump is outrageous; he’s unpredictable, all the definitions of what makes someone newsworthy.”

Analysis of nearly 20,000 articles on the websites of major media outlets show stories about Trump vastly outnumbering stories about Clinton. A Harvard University survey found that both candidates are getting mostly bad press, but Trump’s is more negative … which Trump actually turns to his advantage.

“Has Donald Trump done a better job of using the media than Hillary Clinton in this campaign?” Teichner asked.

Trump: “Hey, when you’re a star they let you do it. You can do anything.”

Clinton: “My Social Security payroll contribution will go up, as will Donald’s, assuming he can’t figure out how to get out of it. But what we want to do is to replenish the Social Security Trust Fund ...”
Trump: “Such a nasty woman.”

For outraged voters, these were defining moments in his race against Hillary Clinton.

Among Clinton supporters, it seems sexism is the elephant in the room -- the constant in the decades of attacks against someone who, in two days, could be elected the first woman President of the United States.

Or, the next president could be Trump, the unlikely populist, speaking for Americans losing their grip on the American Dream.

Whoever wins -- especially if it’s close -- a lot of people will go away mad.

“I don’t see this getting healed very quickly,” Brinkley said. “The battle wounds of 2016 are going to be deep.  And it’s going to take a while for people to decompress, then we can put this national nightmare of 2016 behind us.”