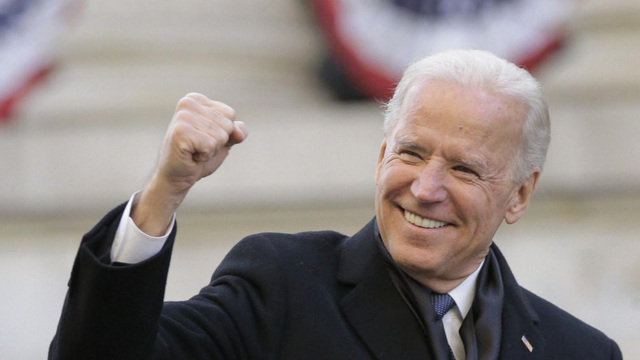 New Hampshire, at first blush, does not seem like the kind of place where Joe Biden's potential presidential aspirations could take flight. The slice of likely Democratic voters who have not settled on either Bernie Sanders or Hillary Clinton is thin, hovering around a mere 6 percent, according to a recent poll from Franklin Pierce University and the Boston Herald.

Still, some 60 percent of the poll's respondents say they could change their minds. And voters in the state are split on whether Biden should enter the race.

In some ways, the vice president's political profile seems like a good fit for New Hampshire. His personal narrative of modest beginnings and his passion for the working class, for example, are well-suited to the primary state's working class bent.

But as Biden mulls a third presidential bid, some Democrats around the state are casting doubt on his chances here. Few here expect him to gain traction if he runs - in part because Hillary Clinton and Bernie Sanders are already dominating the field.

"I don't think he'll be anyone's plan A," Gary Hirshberg, the Londonderry based chairman of the board of Stonyfield Farms and a Clinton bundler, told CBS News. "I think it would add confusion and I also think it's not good for him because this would be his third run and to stutter right out of the gate would be terrible."

Still, Biden supporters point to his loyal network of friends and point out that New Hampshire voters have soft allegiances and are notoriously open to changing their minds at the last minute. There's also the fact that Biden wouldn't just be another ambitious senator this time around: he's the sitting vice president.

In 2008, Biden was "just another one of the senators," said Steven Shurtleff, the Democratic leader of the New Hampshire House of Representatives. Shurtleff supported Biden's run back then. "Senator Obama had just done the convention four years earlier so there was a lot of appeal, and the same with Clinton, and it just didn't gel," he added.

"If he should run again, it would be a lot of a different story. There's a lot about Joe Biden that people would find appealing and his experience would really resonate," he said. "What you see with the vice president is what you get."

Funding was one of the biggest shortfalls in Biden's failed 2008 bid. Shurtleff said of Biden's last run at the presidency that on top of being overshadowed in ad buys in the state, the location of his campaign headquarters - the corner of a Union hall - was "truly inadequate" and that there "wasn't a lot of chum to give out" to voters. While the vice presidency automatically elevates Biden's standing, supporters are working aggressively to secure donors that are not yet guaranteed at this point.

"I know he will do well in New Hampshire. He has a lot of fans here and a lot of friends and some of them have gone with Clinton but that's only because they didn't realize that Biden would seriously consider throwing his hat in the race," Mary Carey Foley, a long time friend and supporter of Biden in Portsmouth, said before sighing over the phone. In between stories of Biden's random acts of kindness, Foley added, "I'm sure some of those people will have a tough time staying with her if and when he jumps in. Biden people are loyal people. I'm anxious. I'm ready to go."

But myriad Democratic voters and operatives see a repeat of 2007 on the horizon if Biden jumps into the race: the vice president could find it difficult to catch up to Clinton and Sanders, who have a sizable head start on him.

"It gets later sooner these days," Kathy Sullivan, the former Chairwoman of the New Hampshire Democratic party and a supporter of Clinton told CBS News. In addition to competing against "two people doing really well," Sullivan pointed out that it's also the Republican side that Biden will have to fight for attention and air time, "You're not just combating the people already committed on the Democratic side but you're also dealing with the fact that the Republicans are getting so much coverage and attention -- that makes it even harder."

Hirshberg offered a bleaker strategic outlook, "The only real hope he has is to pick up disaffected Hillary folks and there's not many people who would fall into that camp. People who fall with Hillary are not troubled by the email stuff. In New Hampshire, people are used to watching the Clintons get beaten up."

However, it should be noted that Biden is used to getting beaten up in New Hampshire. One of the allegations of plagiarism that forced him to drop out of his first presidential bid in September of 1987 took place here. In Claremont, New Hampshire, Biden lost his temper during a coffee klatch when a voter confronted him over his law school record. And during a separate incident at the Nashua Country Club, he had to take a 15-minute break mid-speech because he became nauseous and short of breath. He returned from his bathroom break to finish his speech, but the damage was done.

"In the dining room, all the Rotarians knew was, there wasn't any magic to this guy - none at all. Senator Joseph R. Biden, Jr. - just a tall, skinny balding man reading a speech," Richard Ben Cramer wrote of the incident in the famous campaign book, "What it Takes," describing a heartbreaking moment for Biden during the low of his campaign.

Yet nothing that Biden will potentially face in 2016 will rival the tragedies that he has already suffered. His son Beau died this summer at the age of 46, and before he died, he reportedly begged his father to run for the presidency.

On Wednesday, the vice president talked with Democratic National Committee members on the phone and gave them a sense of his thinking right now. "If I were to announce to run," he told them, "I have to be able to commit to all of you that I would be able to give it my whole heart and my whole soul, and right now, both are pretty well banged up."

Should he make that announcement, he'd be competing in a state where a few polls show some voters pulling back on their support of Clinton.

"I think Biden speaks volumes about the conversations inside the executive branch. He knows something - he's been inside the belly of the beast," Arnie Arnensen, a Concord based liberal democratic radio host and political commentator told CBS News, insinuating the Vice President has insider knowledge of Clinton's brewing email controversy.

By meeting with Senator Elizabeth Warren this weekend, Biden covered " his liberal progressive bases," Arnesen point out. And after receiving a blessing from Obama, "the only person he hasn't gotten approval from is Chelsea Clinton," Arnesen jokingly added.

"I think Clinton doesn't know how to fix it, so I think he will. It's so much about her and not about him but I think Hillary is damaged," She said. "I think there is a significant chance he will run because i think there are more problems to come. "