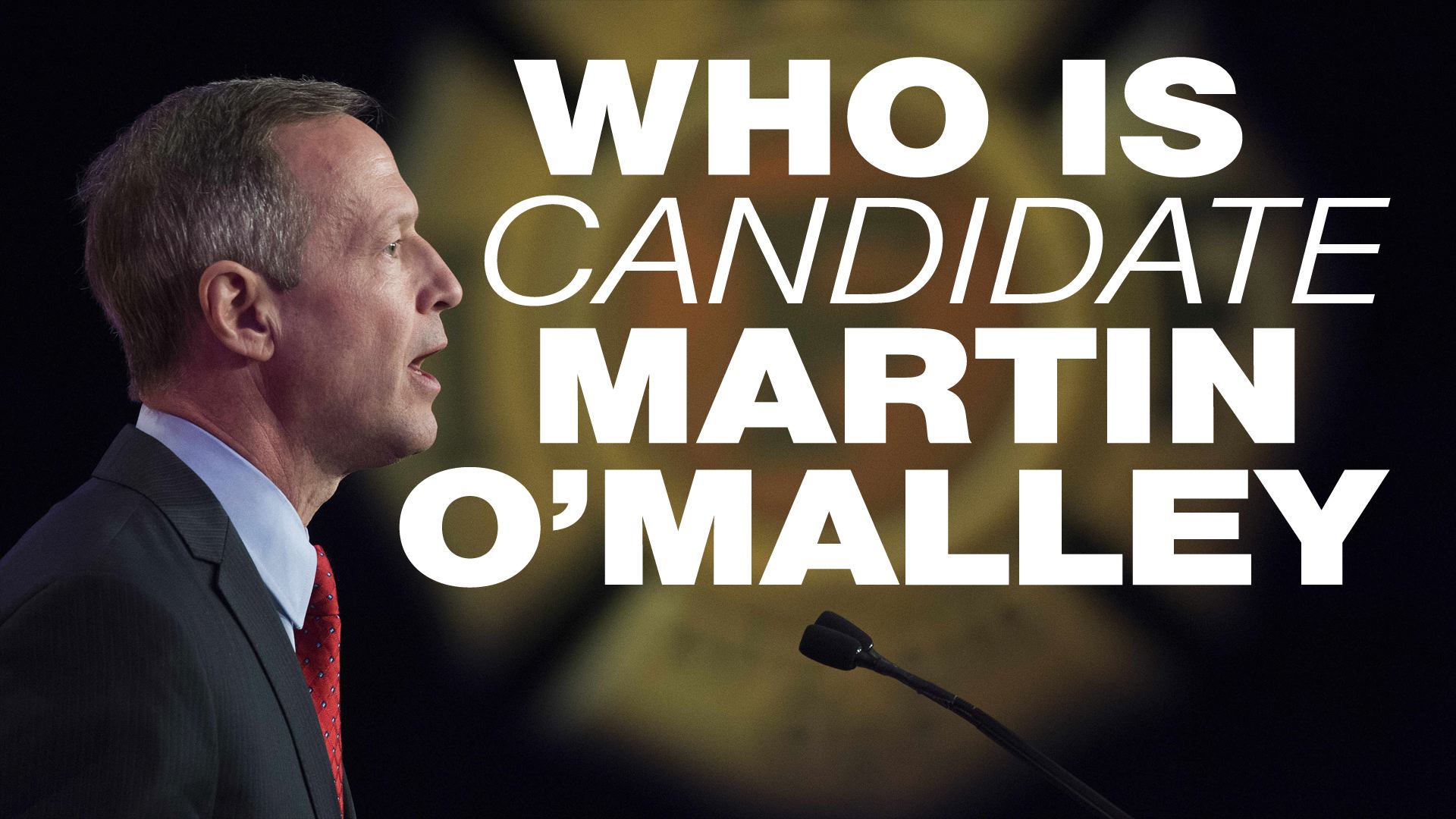 Former Maryland Gov. Martin O'Malley is expected to formally declare his 2016 presidential bid on Saturday at a rally in Baltimore, his home for decades and the city he once served as a councilmember and mayor.

He's been laying the groundwork for a bid for some time, stepping up his visits to early voting states and building the campaign infrastructure he'll need to compete against Democratic frontrunner Hillary Rodham Clinton. This week, some of his political allies launched "Generation Forward," a super PAC dedicated to supporting his candidacy.

The O'Malley team's case for his candidacy is heavily generational. They say the country needs new leadership for the 21st century, and it's a natural argument for O'Malley, who's 52 years of age, compared with the other two Democratic candidates - Clinton, who is 67 and Bernie Sanders, a spry 73.

Still, most analysts consider O'Malley's bid a long shot at this point. A Quinnipiac poll released Thursday showed him at one percent among Democratic primary voters nationwide. But that could change as voters get to know him: A CBS News poll earlier this month found that 11 percent of Democrats would consider supporting O'Malley for the nomination. Seventeen percent said they would not consider him, and 72 percent said they don't know enough to decide.

Here are five things you need to know about Martin O'Malley:

The Clintons are a conflict for him

In a bid to disrupt Hillary Clinton's domination of early Democratic primary polls, O'Malley has positioned himself as the true progressive in the race - the counterpoint to the frontrunner, who has been running as a populist, but has had her centrist moments. (The contrast with Bernie Sanders also makes her look more centrist.)

O'Malley has soft-pedaled his criticisms of Clinton thus far, but you get the sense that a more damning indictment is lurking just offscreen, waiting for the right moment to emerge.

"We can be the party that leads our country into the future," O'Malley told CBS News' "Face the Nation" in April. "But we won't do it unless we offer ideas for the future and break with things like bad trade deals, the systematic deregulation of Wall Street that many Democrats were complicit in and helped get us into this mess."

As evidence of his progressive bona-fides, O'Malley has cited his decision to sign a same-sex marriage bill in 2012 and a bill allowing undocumented immigrants to receive drivers licenses in 2013. Clinton now shares those positions, but she arrived at them more recently than O'Malley - and he wants to make sure voters know it.

"I'm glad Secretary Clinton's come around to the right positions on these issues," O'Malley said in April during an event at Harvard's Institute of Politics. "I believe that we are best as a party when we lead with our principles and not according to the polls...Leadership is about making the right decision, and the best decision before sometimes it becomes entirely popular."

When it comes to Clinton's husband, O'Malley's views are harder to pin down. This year, O'Malley has advanced a dim view of "triangulation," a political strategy associated with former President Bill Clinton during the 1990s to position his administration in the ideological center between the two major parties.

"Triangulation is not a strategy that will move America forward," O'Malley said in February, according to the New York Times. "History celebrates profiles in courage, not profiles in convenience."

In 2007, however, O'Malley was feeling nostalgic for "the success of the last centrist president," he said in a Washington Post op-ed with former Rep. Harold Ford of Tennessee. He wrote admiringly, "Bill Clinton ran on an agenda of sensible ideas that brought America a decade of peace and prosperity. He was the only Democrat to be elected and reelected president in the past seven decades, and he left office more popular than almost any other president in recent memory."

And as recently as 2013, O'Malley said that the model for his own presidential run would be Bill Clinton.

But now, as he seeks a toehold in a race that could once again pit a Bush against a Clinton, O'Malley has suggested he plans to campaign against the power of political dynasties.

"The presidency of the United States is not some crown to be passed between two families," he told ABC News in April. "It is an awesome and sacred trust to be earned and exercised on behalf of the American people."

As mayor of Baltimore, O'Malley oversaw a dramatic reduction in the city's violent crime rate, pushing a "zero tolerance" approach to law enforcement that embraced tough-on-crime police tactics. The Washington Post notes that while O'Malley was in office, "The overall crime rate (the number of crimes per 100,000 people) fell by 48 percent during that decade, more than any other large police agency in the country. Specifically for violent crimes, the Baltimore City Police Department saw the third highest drop (behind Los Angeles and New York City) during the period."

Critics, though, have said some of O'Malley's tactics are partly to blame for the tensions between police and minority communities in Baltimore today. He "probably had the best of intentions, but boy, was it foreseeable," Joe Margulies, a visiting professor at Cornell Law School, told CBS News. "When you are so unrelenting in your stops -- and every officer on the street would tell you this -- you can predict with absolute certainty that you're going to breed a lot of animosity."

"The stake through the heart of police procedure in Baltimore was Martin O'Malley," David Simon, a Baltimore native and the creator of HBO's "The Wire" told The Marshall Project last month. "What happened under his watch as Baltimore's mayor was that he wanted to be governor. And at a certain point, with the crime rate high and with his promises of a reduced crime rate on the line, he put no faith in real policing."

He's a bit of a numbers geek

One of O'Malley's signature initiatives, both as mayor and as governor, was a data-driven approach to governing that used computer programs to measure and track government performance on a wide variety of metrics.

As mayor, he pioneered a program called CitiStat that monitored everything from pothole maintenance to city employee attendance and the deployment of police resources.

Matthew Gallagher, the program's former director, told the Washington Post in March that CitiStat was a "fundamental bedrock" of O'Malley's approach to governance and something he's "rightfully proud of."

And when O'Malley was elected governor of Maryland, he implemented a statewide version of the program called StateStat.

"There's not a doubt in my mind that this is the new way of governing and getting things done," he said of his emphasis on quantitative data during a March speech at the Brookings Institution. "This is the way our federal government should operate. . . . The larger the human organization, the more important performance-based measurement becomes."

That's not the kind of scintillating rallying cry that typically rouses crowds on the stump, but O'Malley has suggested it will resonate nonetheless.

"I think people are actually far more interested in a functioning government and effective governance and people with executive experience than we might give them credit for," he said during the speech at Brookings.

He inspired a character on HBO's "The Wire"

One of the most acclaimed shows on television between 2002 and 2008 was HBO's "The Wire," which took a gritty, unflinching look at life in inner city Baltimore. The show included perspectives from the city's police force and some of its criminal elements. It also included the view from City Hall, and one of the show's characters, Tommy Carcetti, bore a striking resemblance to O'Malley.

Of course, Carcetti, as his name suggests, was an Italian-American, and O'Malley is an Irish-American. But the actor who played Carcetti, Aidan Gillen, is Irish.

The parallels are striking, but show creator David Simon has said O'Malley was only one of several politicians that influenced Carcetti's character.

Carcetti wasn't always the most morally upstanding player in the show, though, which limits the upside of the comparison a little for O'Malley. In one plot line, Carcetti cooked the city's crime statistics to make it seem like he'd achieved drastic reductions in crime in Baltimore. The story echoed complaints from O'Malley's critics that his data-tracking program CitiStat effectively fudged crime statistics to tell a misleading story about progress.

"O'Malley's tenure was as destructive a mayoralty to causes of crime and punishment as Baltimore has ever seen and, by that standard, Tommy Carcetti makes him look good," Simon told the Daily Beast in 2013.

He's in a Celtic rock band

While he usually plays the part of a fairly unassuming politician, O'Malley has an edgier side as well: he's actually the frontman and lead guitarist for "O'Malley's March," a Celtic rock band.

The band was formed in 1988, according to the Washington Post, and it's seen a host of members cycle through during the last few decades. But even as O'Malley has continued his rise up the political ladder, the band hasn't been discarded. If anything, it's actually risen in prominence thanks to the increased prominence of its frontman.

The band played at O'Malleys inaugural balls in 2007 and 2011, and it sporadically played gigs while O'Malley occupied the governor's mansion. In December 2014, the band played its final shows of O'Malley's tenure during a two-night event at the Rams Head in Annapolis, Maryland.

In some ways, O'Malley has argued, the business of governing is not entirely dissimilar to his experience onstage with the band.

"The other guys in the band are the real musicians, and so if you surround yourself with really strong musicians, anything is possible," he told Yahoo News in 2014. "And, in that sense, it's similar to governing. If you surround yourself with people that are actually really good at doing what they do, then that makes the whole effort move forward."

Asked whether he might bring the band on the 2016 campaign trail with him, O'Malley demurred. "I haven't thought that far down the road," he said. "The band's never played at a campaign rally. I used to play a lot more as mayor. You could always be at any black tie event and still make downbeat by 10 p.m."