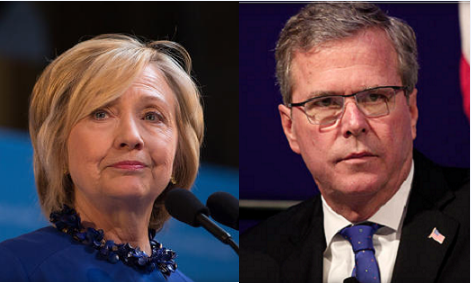 Chris Christie remains the potential candidate with the largest percentage of Republicans who say they would not consider him.

Carly Fiorina also recently announced her candidacy, and she is unknown to about seven in ten Republican voters, as is John Kasich. More than half don't know enough about Lindsey Graham and Bobby Jindal.

About four in ten say that Marco Rubio has the right experience, and 51 percent think his positions are about right - but about a third don't know at this early stage in the campaign.

Many also don't know enough to evaluate Scott Walker on these measures. Thirty-nine percent think he has the right experience, and 42 percent think his views are about right as well.

Marco Rubio and Ted Cruz are of Cuban descent, and generally, most voters overall think America is ready to elect a Hispanic president. Sixty-eight percent think so, including most Republicans (64 percent), Democrats (65 percent), and independents (74 percent).

Republicans on the Issues

Sixty-one percent of Republicans say that same sex marriage should not be legal, but 46 percent would consider voting for a candidate who disagreed with them.

Republicans are less tractable on two other issues measured in the poll. They continue to disapprove of the ACA health care law, and 58 percent say they would not vote for a candidate who disagrees with them on this issue.

Fifty-nine percent of Republican voters say they would not vote for someone who disagrees with them on handling the militant group ISIS. Just over half support U.S. involvement in conflicts overseas: 53 percent think the U.S. should take the leading role among all other countries in the world in trying to resolve international conflicts, while 42 percent think it should not.

With her candidacy now official, Hillary Clinton continues to be the top candidate for the Democratic nomination for president. Eighty-five percent of Democratic voters would consider voting for her - similar to March.

Vice President Joe Biden is a distant second to Clinton (53 percent would consider him), followed by Massachusetts Senator Elizabeth Warren (36 percent), although half of Democratic voters don't know enough about Warren to have an opinion.

Senator Bernie Sanders, an independent who caucuses with the Democrats, threw his hat in the ring last week and will run for the Democratic nomination. Most Democratic voters don't know much about Sanders, but more would consider voting for him (23 percent) than not (16 percent). These views are more positive than they were before Mr. Sanders made his announcement.

In general, 78 percent of registered voters think America is ready to elect a woman as president - including majorities of Republicans (61 percent), Democrats (89 percent), and independents (78 percent).

The public divides on whether Hillary Clinton is honest and trustworthy: 48 percent say she is, but 45 percent say she isn't. These figures have improved slightly since March, in the weeks following the controversy over her emails when she was Secretary of State.

In announcing her presidential bid, Clinton said: "Everyday Americans need a champion. And I want to be that champion." The poll finds more than half of Americans (52 percent) think Clinton shares the values most Americans try to live by, but 39 percent don't think she does.

Leadership continues to be one of Clinton's strengths. Sixty-five percent of Americans say she has strong qualities of leadership, up from 57 percent in March.

If Hillary Clinton is elected president, most voters think she would generally continue Barack Obama's policies.

However, Americans are divided in their overall opinion of her: 35 percent have a favorable opinion (up nine points since March) and 36 percent view her unfavorably.

Fewer than half of Americans have heard or read a lot or some about the Clinton Foundation, including just 14 percent who have read a lot about it.

When Americans are asked about the purpose of the foundation, 25 percent say it is both charitable and political. 11 percent think the foundation is mostly charitable, in that it raises and spends money to provide help to those in need. Slightly more - 17 percent - say its purpose is mostly political - that it furthers the interests of the Clinton family. Four in 10 don't know enough to say.

When Democratic voters are asked whether they would consider supporting a candidate who has a different position on an issue than they do, more than half say they would not vote for a candidate who disagrees with them on the health care law or same-sex marriage. Most Democrats support both of these policies.

Democratic voters are more likely to say they would consider voting for a candidate who disagreed with them on dealing with the militant group ISIS and on immigration.

Another Bush or Clinton in the White House?

For twenty of the past twenty six years, a person with the last name Bush or Clinton has been in the White House. The 2016 presidential campaign offers the possibility of adding to that legacy, with Hillary Clinton already announced as a Democratic candidate, and Jeb Bush widely expected to announce on the Republican side.

Registered voters overall are more likely to think it would be a bad thing for the country (33 percent) than a good thing (13 percent) if another member of the Bush or Clinton family became the next president, though nearly half (47 percent) say it wouldn't really make much difference.

Among Americans overall, Bill Clinton remains the more popular of the two former Presidents. Although favorable views have dropped slightly since just after he left office in 2001, 50 percent of Americans have a favorable opinion of Bill Clinton - more than twice as many as have an unfavorable opinion. In contrast, favorable views of George W. Bush have risen slightly since he left office, though overall opinion of him remains far more negative: 30 percent of Americans view George W. Bush favorably, while 46 percent view him unfavorably.

Most Americans still don't have an opinion of Jeb Bush, but of those who do, far more view him unfavorably (28 percent) than favorably (9 percent).

The Right Qualities for a Presidential Candidate

This emphasis on experience over fresh ideas marks a change from the 2008 election. In August 2007, voters' priorities were divided between having the right experience (44 percent) and having fresh ideas (41 percent).

Gearing up for the 2016 Presidential Campaign

Although still in its early stages, two thirds of registered voters are paying at least some attention to the 2016 presidential campaign. But fewer are tuned in compared to this point during the 2008 campaign, the last election in which an incumbent was not seeking re-election. 66 percent of Americans are paying a lot or some attention to the 2016 campaign, compared to 76 percent in April 2007.

Raising money through officially unaffiliated Super PACs and other third party groups is underway. Eighty-one percent of voters think spending on campaign advertising by unaffiliated groups should be limited, including most Republicans (72 percent), Democrats (87 percent), and independents (81 percent).

This poll was conducted by telephone April 30-May 3, 2015 among a random sample of 1,027 adults nationwide. Data collection was conducted on behalf of CBS News and The New York Times by SSRS of Media, PA. Phone numbers were dialed from samples of both standard land-line and cell phones. The error due to sampling for results based on the entire sample could be plus or minus three percentage points. The error for subgroups may be higher. Interviews were conducted in English and Spanish. This poll release conforms to the Standards of Disclosure of the National Council on Public Polls.