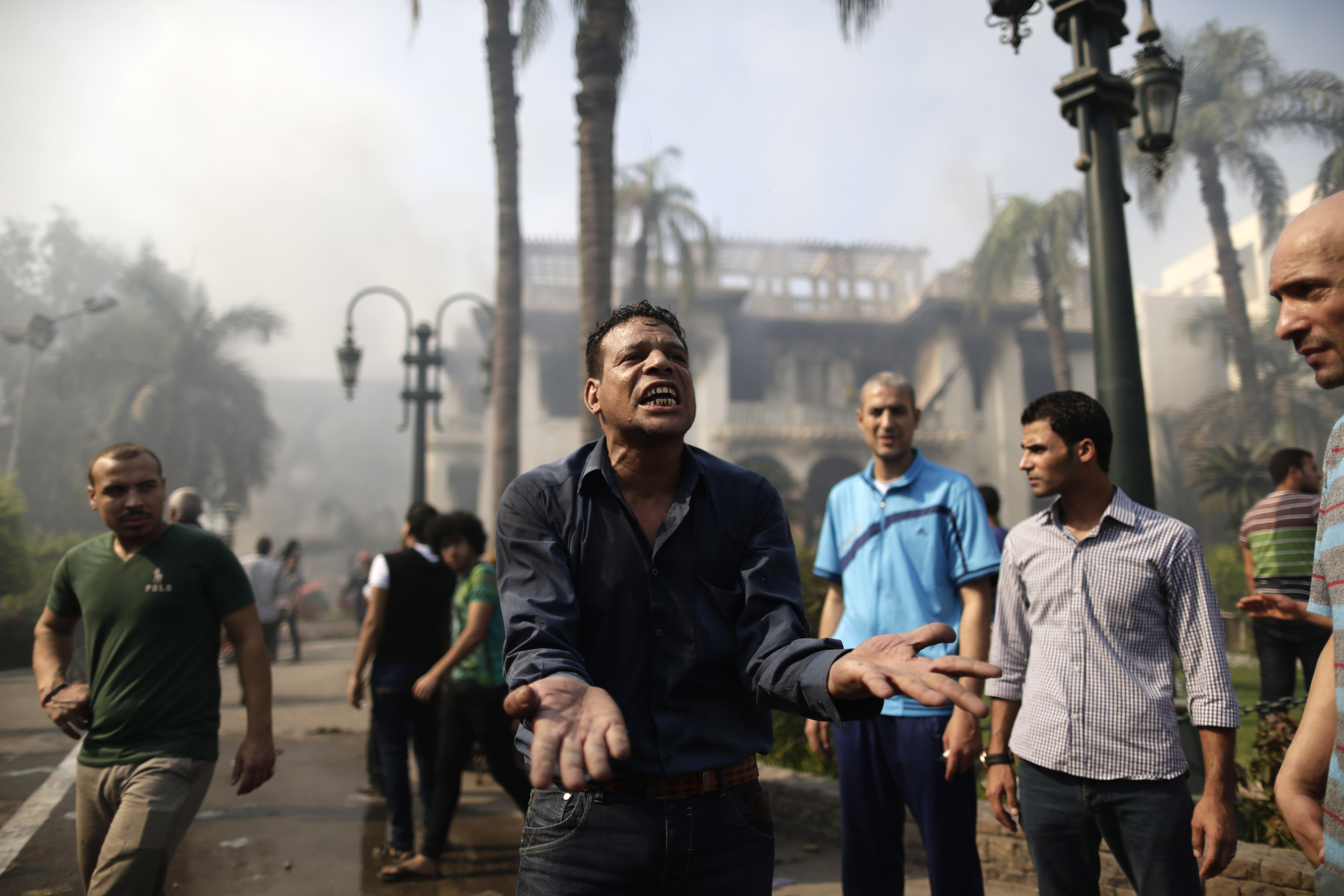 CAIRO Angry supporters of Egypt's ousted president stormed and torched Thursday two buildings housing the local government in Giza, the city next to Cairo that is home to the famed pyramids.

The Giza government offices are located on the Pyramids Road on the west bank of the River Nile.

State TV blamed supporters of ousted President Mohammed Morsi for the fire. Its footage shows both structures burning with firefighters evacuating employees from the larger building.

Morsi's Muslim Brotherhood has called for fresh protests on Thursday, raising the specter of renewed violence. However, there were no reports of any large gatherings by early afternoon.

CBS News correspondent Charlie D'Agata reported on "CBS This Morning" Thursday from Cairo that the Brotherhood called Wednesday's violence no less than a massacre. On Thursday, they said their fight is not over, vowed to bring down what they called the "military coup" and said they remained committed to peaceful demonstrations.

On Martha's Vineyard in Massachusetts, where President Obama is vacationing, Mr. Obama announced that upcoming military exercises with U.S. and Egyptian forces would be canceledin light of Wednesday's crackdown.

"The Untied States strongly condemns the steps that have been taken by Egypt's interim government and security forces," Mr. Obama told reporters.

Also Thursday, Egyptian authorities significantly raised the death toll from Wednesday's clashes, saying more than 500 people died and laying bare the extent of the violence that swept much of the country and prompted the government to declare a nationwide state of emergency and a nighttime curfew.

The death toll, which stood at 525, according to the latest Health Ministry figures, makes Wednesday by far the deadliest day since the 2011 popular uprising that toppled longtime ruler and autocrat Hosni Mubarak — a grim milestone that does not bode well for the future of a nation roiled in turmoil and divisions for the past 2 1/2 years.

Health Ministry spokesman Khaled el-Khateeb put the number of the injured on Wednesday at 3,717.

The Brotherhood put the death toll at a staggering 2,600 and the injured at around 10,000 - figures that are extremely high in light of footage by regional and local TV networks, as well as The Associated Press.

CBS News producer Alex Ortiz, who was in the middle of the violence Wednesday as Egyptian forces laid siege to the protest camp outside the Rabbah al-Adawiya Mosque in Cairo's Nasr City district, reported most of the wounds he saw at a makeshift hospital inside the Rabaah camp were gunshots to the head and chest, consistent with reports of police automatic weapons and sniper fire being directed at the camp.

While the violence was not entirely one-sided - protesters pushed over a police car, killing four officers, and there were unconfirmed reports that some protesters were armed - the security forces used overwhelming force against them to clear the camps.

The Iman Mosque in Nasr City was packed with corpses, many of which were extremely burnt and blackened, Ortiz reports. The crowd there said they were victims of Wednesday's massive violence.

Inside, people placed blocks of ice on the shrouded dead, Ortiz reports. Others walked gingerly around the corpses upon the stained, wet carpet, spraying air-freshener in a futile attempt to counter the stench.

At least a hundred corpses were visible inside the mosque, Ortiz reports. Mourners slowly brought the bodies out in coffins and placed them into cars.

El-Khateeb said 202 of the 525 were killed in the Nasr City protest camp, but it was not immediately clear whether the bodies at the mosque were included in that figure. Another Health Ministry spokesman, Mohammed Fathallah, said he had no knowledge of the bodies at the el-Iman mosque.

"They accuse us of setting fire to ourselves. Then, they accuse us of torturing people and dumping their bodies. Now, they kill us and then blame us," screamed a woman in a head-to-toe black niqab.

Omar Houzien, a volunteer helping families search for their loved ones, said the bodies were brought in from the Medical Center at the sit-in camp site in the final hours of Wednesday's police sweep because of fears that they would be burned.

A list plastered on the wall listed 265 names of those said to have been killed in Wednesday's violence at the sit-in. Funerals for identified victims were expected to take place later on Thursday.

Meanwhile, a mass police funeral — with caskets draped in the white, red and black Egyptian flag — was held in Cairo for some of the 43 security troops killed in Wednesday's clashes.

Interior Minister Mohammed Ibrahim, who is in charge of the police, led the mourners. A police band played funerary music as a somber funeral procession moved with the coffins placed atop red fire engines.

Wednesday's violence started with riot police raiding and clearing out the two camps, sparking clashes there and elsewhere in the Egyptian capital and other cities.

Ortiz reports Cairo was eerily quiet Thursday morning. Indeed, the city of some 18 million people had only a fraction of its usually hectic traffic and many stores and government offices shuttered. Many people hunkered down at home for fear of more violence. Banks and the stock market were closed.

The latest events in Egypt drew widespread condemnation from the Muslim world and the West, including the United States, Egypt's main foreign backer for over 30 years.

Interim Prime Minister Hazem el-Beblawi said in a televised address to the nation that it was a "difficult day" and that he regretted the bloodshed but offered no apologies for moving against Morsi's supporters, saying they were given ample warnings to leave and he had tried foreign mediation efforts.

Several prominent Brotherhood figures were detained as police swept through the two sit-in sites, scores of other Islamists were taken into custody, and the future of the once-banned movement was uncertain.

Backed by helicopters, police fired tear gas and used armored bulldozers to plow into the barricades at the two protest camps on opposite ends of Cairo. Morsi's supporters had been camped out since before he was ousted by a July 3 coup that followed days of mass protests by millions of Egyptians demanding that he step down.

The smaller camp — near Cairo University in Giza — was cleared of protesters relatively quickly, but it took about 12 hours for police to take control of the main Rabaah site that has served as the epicenter of the pro-Morsi campaign and had drawn chanting throngs of men, women and children only days earlier.

After the police moved on the camps, street battles broke out in Cairo and other cities across Egypt. Government buildings and police stations were attacked, roads were blocked, and Christian churches were torched, Interior Minister Mohammed Ibrahim said.

At one point, protesters trapped a police Humvee on an overpass near the Nasr City camp and pushed it off, according to images posted on social networking sites that showed an injured policeman on the ground below, near a pool of blood and the overturned vehicle.

Three journalists were among the dead: Mick Deane, 61, a cameraman for British broadcaster Sky News; Habiba Ahmed Abd Elaziz, 26, a reporter for the Gulf News, a state-backed newspaper in the United Arab Emirates; and Ahmed Abdel Gawad, who wrote for Egypt's state-run newspaper Al Akhbar. Deane and Elaziz were shot to death, their employers said, while the Egyptian Press Syndicate, a journalists' union, said it had no information on how Gawad was killed.

The turmoil was the latest chapter in a bitter standoff between Morsi's supporters and the interim leadership that took over the Arab world's most populous country. The military ousted Morsi after millions of Egyptians massed in the streets at the end of June to call for him to step down, accusing him of giving the Brotherhood undue influence and failing to implement vital reforms or bolster the ailing economy.

Morsi has been held at an undisclosed location since July 3. Other Brotherhood leaders have been charged with inciting violence or conspiring in the killing of protesters.

A security official said 200 protesters were arrested at both camps. Several men could be seen walking with their hands up as they were led away by black-clad police.

The Brotherhood has spent most of the 85 years since its creation as an outlawed group or enduring crackdowns by successive governments. The latest developments could provide authorities with the grounds to once again declare it an illegal group and consign it to the political wilderness.

In his televised address, el-Beblawi said the government could not indefinitely tolerate a challenge to authority that the 6-week-old protests represented.

"We want to see a civilian state in Egypt, not a military state and not a religious state," he said.

But the resignation of ElBaradei, the former head of the U.N. nuclear agency and a figure widely respected by Western governments, was the first crack to emerge in the government as a result of the violence.

ElBaradei had made it clear in recent weeks that he was against the use of force to end the protests. At least 250 people have died in previous clashes since the coup that ousted Morsi, Egypt's first freely elected president.

On Wednesday, his letter of resignation to interim President Adly Mansour carried an ominous message to a nation already torn by more than two years of turmoil.

"It has become difficult for me to continue to take responsibility for decisions I disapprove of, and I fear their consequences," he said in the letter that was emailed to The Associated Press. "I cannot take responsibility before God, my conscience and country for a single drop of blood, especially because I know it was possible to spare it.

The National Salvation front, the main opposition grouping that he headed during Morsi's year in office, said it regretted his departure and complained that it was not consulted beforehand. Tamarod, the youth group behind the mass anti-Morsi protests that preceded the coup, said ElBaradei was dodging his responsibility at a time when his services were needed.

Sheik Ahmed el-Tayeb, the powerful head of Al-Azhar mosque, Sunni Islam's main seat of learning, also sought to distance himself from the violence. He said in a statement he had no prior knowledge of the action.