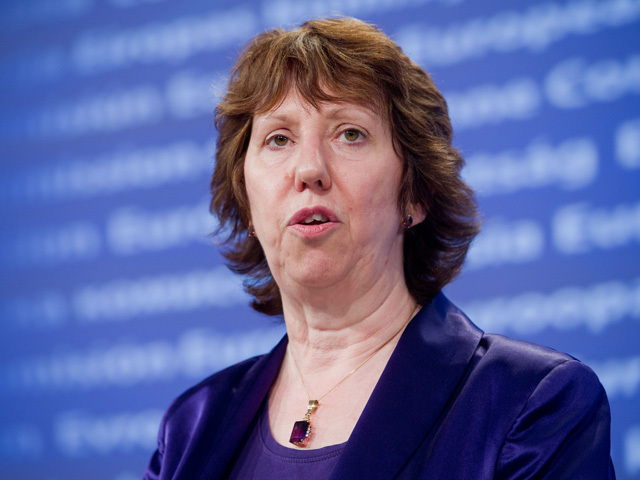 Late Monday night, the European Union's top diplomat, Catherine Ashton, was taken to a secret facility where Morsi is being held.

The military ousted him nearly a month ago. Since then, his supporters from the Muslim Brotherhood have taken to the streets in protests -- some of which have turned deadly.

Full Coverage: After the Arab Spring

In a press conference Tuesday, Ashton gave remarkably few details about her meeting. She said that the two of them had a "frank" and "friendly" open discussion that lasted about two hours.

Ashton also said the ousted leader had access to television and newspapers and that he was aware of events in Cairo, but would not give more details about what exactly Morsi said.

Where Morsi is being held is also a mystery. Ashton was flown to the location via helicopter late at night and told reporters she did not know where exactly she was when she met with the former Egyptian president.

The U.S. government is having difficulty getting a full, clear picture of the situation in Cairo, but Secretary of State John Kerry, Defense Secretary Chuck Hagel and other officials in the administration are all reaching out regularly to their Egyptian counterparts to press the importance of negotiating with the Muslim Brotherhood.

CBS News has recently learned that President Barack Obama is sending Sen. Lindsey Graham (R-S.C.) and Sen. John McCain (R-Ariz.) to Cairo next week to further emphasize the message and try to convey to the military the importance of handing over control to a civilian government as soon as possible.