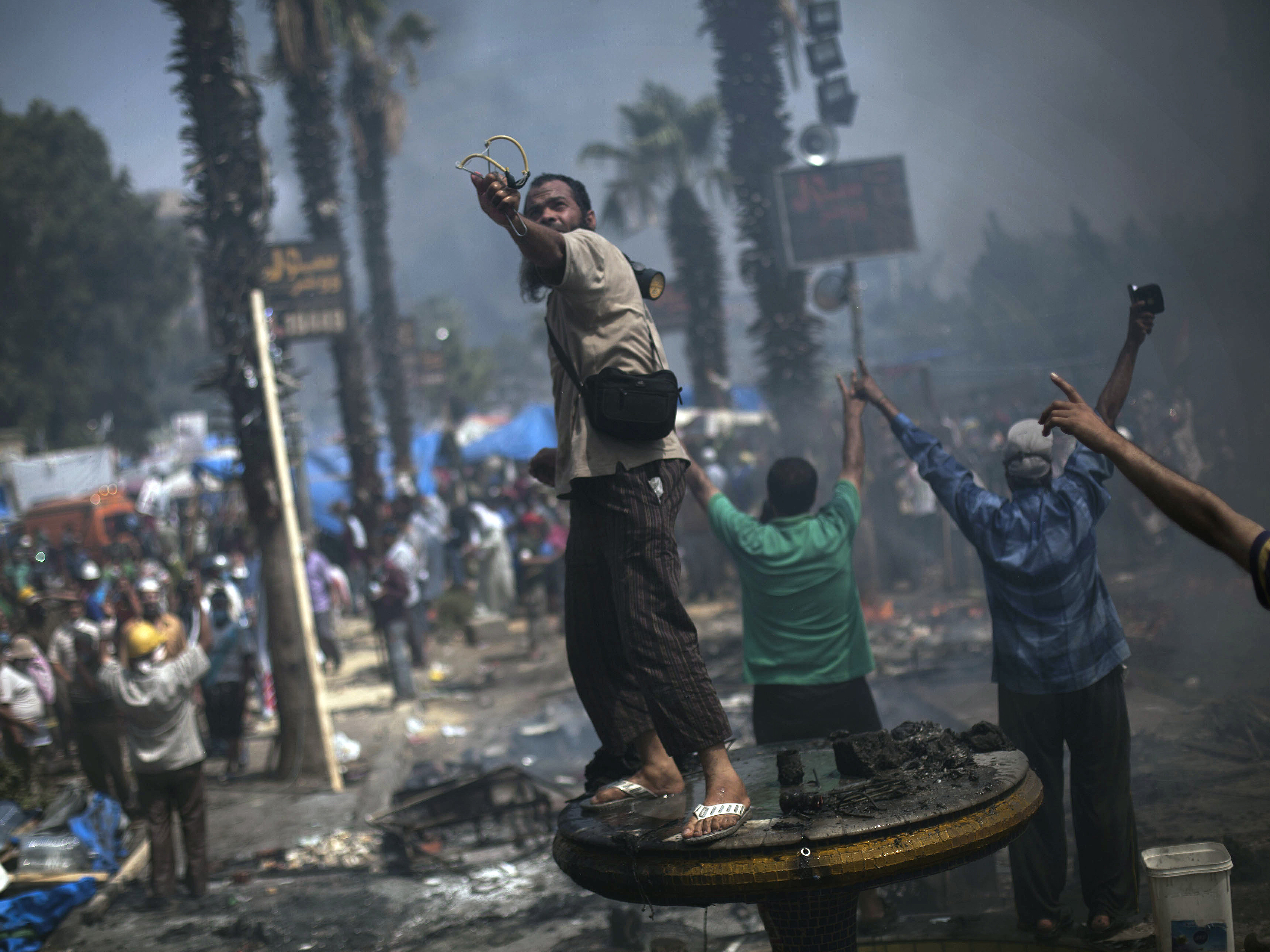 CAIRO Riot police backed by armored vehicles, bulldozers and helicopters Wednesday swept away two encampments of supporters of ousted President Mohammed Morsi, setting off running street battles in Cairo and other Egyptian cities. Hundreds were killed nationwide, most coming in the crackdown on the protest sites.

Vice President Mohamed ElBaradei, a Nobel Peace Prize laureate and pro-reform leader in the interim government, resigned in protest over the assaults as the military-backed leadership imposed a monthlong state of emergency and nighttime curfew.

The Health Ministry said 278 civilians were killed and more than 2,000 injured, while Interior Minister Mohammed Ibrahim said 43 policemen died in the assault. He said Morsi supporters attacked 21 police stations and seven Coptic Christian churches across the nation, and assaulted the Finance Ministry in Cairo, occupying its ground floor.

Clashes broke out elsewhere in the capital and other provinces as Islamist anger spread over the dispersal of the 6-week-old sit-ins of Morsi supporters that divided Egypt.

CBS News correspondent Charlie D'Agata reported the streets look like a war zone and security was clamping down even tighter Wednesday night.

Most of the wounds CBS News crew saw at a make-shift hospital were gunshots to the head and chest, consistent of reports of police sniper fire pouring into the camp. Although the violence is not entirely one-sided; protesters pushed over a police car, killing four police officers.

The violence drew condemnation from other predominantly Muslim countries, but also from the West, with Secretary of State John Kerry saying it had dealt a "serious blow" to Egypt's political reconciliation efforts.

"In the past week, at every occasion ... we and others have urged the government to respect the rights of free assembly and of free expression, and we have also urged all parties to resolve this impasse peacefully and underscored that demonstrators should avoid violence and incitement," Kerry said.

Still, Obama administration officials signaled no change in U.S. policy toward Egypt or clear consequences for the mounting violence. The U.S. has avoided declaring Morsi's ouster a coup, a move that would force the administration to suspend $1.3 billion in annual military aid to the strategically important nation. The State Department said it was reviewing aid to the country, but spokeswoman Jen Psaki said any decision is "not about responding to one day."

The assault to take control of the two sit-in sites came after days of warnings by the interim administration that replaced Morsi after he was ousted in a July 3 coup. The camps on opposite sides of the Egyptian capital began in late June to show support for Morsi. Protesters — many from Morsi's Muslim Brotherhood — have demanded his reinstatement.

The smaller camp was cleared relatively quickly, but it took hours for police to take control of the main sit-in site, which is near the Rabbah al-Adawiya Mosque that has served as the epicenter of the pro-Morsi campaign.

CBS News' Alex Ortiz said police and army personnel had blocked every road into the area around the Rabaah camp, and pro-Morsi demonstrators clashed with police outside the cordoned-off area. He said huge plumes of black smoke poured from the camp and the sound of automatic gunfire was relentless.

Sam Kiley, a veteran war correspondent for CBS News partner network Sky News, reported from the Rabaah camp that "live fire seems to be principle method being used to clear the area," adding that he had seen many dead, but that death tolls being reported were unlikely reliable because the "numbers are escalating constantly."

Several senior leaders of the Muslim Brotherhood who were wanted by police were detained after police stormed the camp near the mosque, according to security officials and state television. Among those seized were Brotherhood leaders Mohammed el-Beltagy and Essam el-Erian, and hard-line cleric Safwat Hegazy — all wanted by prosecutors to answer allegations of inciting violence and conspiring to kill anti-Morsi protesters.

Smoke clogged the sky above Cairo and fires smoldered on the streets, which were lined with charred poles and tarps after several tents were burned.

Ortiz made it past security cordons into a field hospital inside the cordoned-off area around the mosque. The youngest fatality seen by Ortiz appeared to be no more than 13 years of age.

Ortiz reported, however, that the field hospital building was five stories high, and there were dead and wounded on every floor which he could not see. The stairs and floors were covered with blood, and there was a steady stream of dead and wounded arriving at the site.

In imposing the state of emergency, the government ordered the armed forces to support the police in restoring law and order and protect state facilities. The nighttime curfew affects Cairo and 10 provinces.

The Egyptian Central Bank instructed commercial banks to close branches in areas affected by the chaos, a sign of alarm that the violence could spiral out of control. The landmark Giza Pyramids and the Egyptian Museum also were closed to visitors for the day as a precaution, according to the Ministry of Antiquities.

The turmoil was the latest chapter in a bitter standoff between Morsi's supporters and the interim leadership that took over the Arab world's most populous country. The military ousted Morsi after millions of Egyptians massed in the streets at the end of June to call for him to step down, accusing him of giving the Brotherhood undue influence and failing to implement vital reforms or bolster the ailing economy.

The coup provoked similar protests by Morsi's backers after he and other Brotherhood leaders were detained as divisions have deepened, dealing a major blow to hopes of a return to stability after the 2011 revolution that toppled autocratic ruler Hosni Mubarak.

Morsi has been held at an undisclosed location. Other Brotherhood leaders have been charged with inciting violence or conspiring in the killing of protesters.

"The world cannot sit back and watch while innocent men, women and children are being indiscriminately slaughtered. The world must stand up to the military junta's crime before it is too late," said a statement by the Brotherhood's media office in London emailed to The Associated Press.

In his resignation letter, he wrote that he is not prepared to be held responsible for a "single drop of blood," and that only more violence will result, according to a copy that was emailed to The Associated Press. He said Egypt is more polarized than when he took office.

The smaller of the two protest camps was cleared of protesters by late morning, with most of them taking refuge in the nearby Orman botanical gardens on the campus of Cairo University and the zoo.

An AP reporter at the scene said security forces chased protesters in the zoo. At one point, a dozen protesters, mostly men with beards and wearing traditional Islamist garb, were handcuffed on a sidewalk under guard outside the university campus. The private ONTV network showed firearms and ammunition allegedly seized from protesters.

Security forces later stormed the larger camp near the mosque in the Cairo district of Nasr City. The mosque has served as the epicenter of pro-Morsi campaign, with several Brotherhood leaders wanted by police believed to be hiding inside.

The pro-Morsi Anti-Coup alliance claimed security forces used live ammunition, but the Interior Ministry, which is in charge of the police, said its forces only used tear gas and that they came under fire from the camp.

The Interior Ministry statement also warned that forces would deal firmly with protesters who were acting "irresponsibly," suggesting that it would respond in kind if its men are fired upon. It said it would guarantee safe passage to all who want to leave the Nasr City site but would arrest those wanted for questioning by prosecutors.

An alliance of pro-Morsi groups said Asmaa Mohammed el-Batagy, the 17-year-old daughter of the senior Brotherhood figure who was detained by police, was shot and killed. Her brother, Ammar, confirmed her death on his Twitter account.

Two journalists were among the dead — Mick Deane, 61, a cameraman for British broadcaster Sky News, and Habiba Ahmed Abd Elaziz, 26, a reporter for the Gulf News, a state-backed newspaper in the United Arab Emirates, the news organizations reported. Both had been reported to be shot.

A security official said 200 protesters were arrested at both sites. Several men could be seen walking with their hands up as they were led away by black-clad police.

The Muslim Brotherhood's political arm claimed that more than 500 protesters were killed and some 9,000 wounded in the two camps, but those figures could not be confirmed and nothing in the video from AP or local TV networks suggested such a high death toll.

Before he was detained, Mohammed el-Beltagy put the death toll at more than 300, urged police and army troops to mutiny, and said Egyptians should take to the streets to show their disapproval of the crackdown.

"Oh, Egyptian people, your brothers are in the square. ... Are you going to remain silent until the genocide is completed?" said el-Beltagy, who is wanted by authorities to answer allegations of inciting violence.

Police fired tear gas elsewhere in Cairo to disperse Morsi supporters who wanted to join the Nasr City camp after it came under attack. State TV also reported that a police captain had been abducted by Morsi supporters in the area, but there was no official statement about that.

Islam Tawfiq, a Brotherhood member at the Nasr City sit-in, said the camp's medical center was filled with dead and that the injured included children.

"No one can leave and those who do are either arrested or beaten up," he told AP.

Security officials said train services between northern and southern Egypt were suspended to prevent Morsi supporters from traveling to Cairo. Clashes erupted on two roads in the capital's upscale Mohandiseen district when Morsi supporters opened fire on passing cars and pedestrians. Police used tear gas to chase them away.

The security officials spoke on condition of anonymity because they were not authorized to talk to media.

Morsi supporters want him reinstated and are boycotting the military-sponsored political process, which includes amending the Islamist-backed constitution adopted last year and holding parliamentary and presidential elections early next year.

The U.S. gave a stern warning to Egypt's leaders, with Kerry condemning the violence as well as the restoration of emergency rule. He urged them to calm the situation.

"This is a pivotal moment for all Egyptians," said Kerry, who spoke by phone with the foreign minister. "The path toward violence leads only to greater instability, economic disaster and suffering."

Turkish Prime Minister Recep Tayyip Erdogan's office called it "a serious blow to the hopes of a return to democracy," while Iran warned that the violence "strengthens the possibility of civil war."

British Prime Minister David Cameron, who also condemned the violence, called for "a genuine transition to a genuine democracy. That means compromise from all sides — the President Morsi supporters but also the military."

At least 250 people have died in previous clashes since the coup.

Morsi, Egypt's first freely elected president, had just completed a year in office when he was toppled. He has largely been held incommunicado but was visited by Ashton and an African delegation.

Several bids by the U.S., the European Union and Gulf Arab states to reconcile the two sides in Egypt in an inclusive political process have failed, with the Brotherhood insisting that Morsi must first be freed along with several of the group's leaders who have been detained in connection with incitement of violence.

The trial of the Brotherhood's leader, Mohammed Badie, and his powerful deputy, Khairat el-Shater, on charges of conspiring to kill protesters is due to start later this month. Badie is on the run, but el-Shater is in detention. Four others are standing trial with them on the same charges.