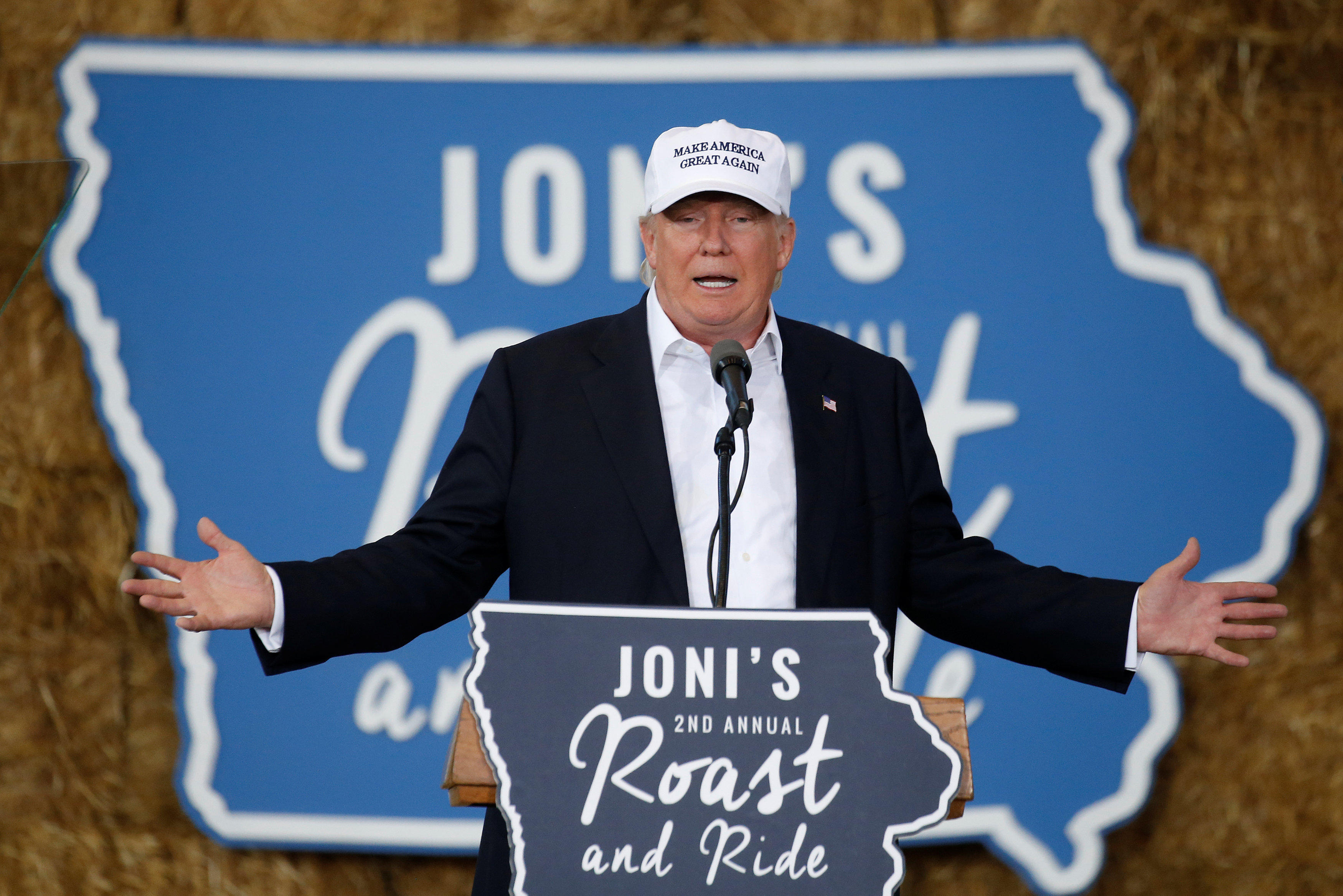 “On day one, I’m going to begin swiftly removing criminal illegal immigrants from this country,” Trump promised to the mostly white audience gathered at Iowa Sen. Joni Ernst’s Roast and Ride. Trump chose not to join in the Republican senator’s traditional 42-mile motorcycle ride that preceded the address.

Trump, who used a teleprompter for most of his speech, sometimes veered off-script to hit hardest at the “the international gangs of thugs and drug cartels” in the undocumented immigrant population.

“We are going to get rid of the criminals and it’s going to happen within one hour after I take office, we start, OK?” he went on. “Gonna bring them back where they came from.”

Later, Trump promised once more that “bad people” will be gone “within one hour after I take office.”

Trump ticked off a list of other immigration policies, including some he’s mentioned before and a promise to develop an “exit-entry tracking system” for visa overstays:

“We’re going to build a great wall on the border, institute nationwide e-verify, stop illegal immigrants from accessing welfare and entitlements, and develop an exit-entry -- and you know what that is -- an exit-entry system system to ensure those who overstay their visas, that they’re quickly removed,” the GOP nominee said, reading off a prompter before adding that he also plans to “cancel all unconstitutional executive orders.”

Trump did not clarify, however, whether he would engage in mass deportation efforts and allow undocumented immigrants a pathway to citizenship.

Trump, making a broader appeal to minority voters in Iowa, also mentioned the Chicago killing of Nykea Aldridge, the cousin of NBA player Dwyane Wade, and pledged that his administration would be best for African-American voters.

“She was the mother of four, and was killed while pushing her infant child in a stroller. Just walking down the street. Shot,” he said. “It breaks all of our hearts to see it. It’s horrible. It’s horrible and it’s only getting worse. This shouldn’t happen in our country. This shouldn’t happen in America. So we send our thoughts and prayers to the family, and we also promise to fight for a much, much better tomorrow.”

Earlier in the day, Trump drew a hailstorm of social media criticism for his tweet on Aldridge, when he said that her death was “Just what I have been saying,” before tacking on “African-Americans will VOTE TRUMP!”

Observing that there were “a lot of farmers” in at the Iowa fairgrounds, the Manhattan billionaire also blasted Clinton for her “war on the American farmer.”

He swore to lower taxes on family farms and pledged to support a continuation of the ethanol requirement in gasoline -- popular positions in agriculture-heavy Iowa.