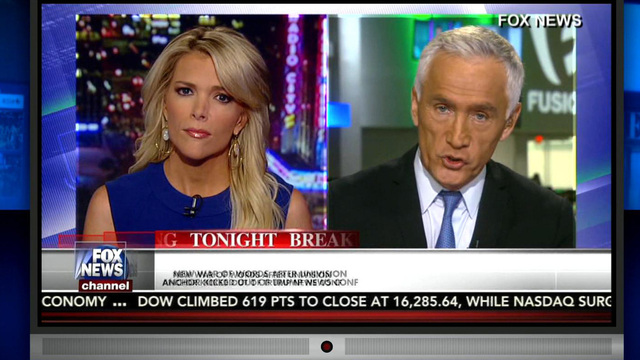 Donald Trump's fiery rhetoric continues to be the talk of the 2016 campaign trail as candidates from both parties -- and journalists -- are responding to his attacks. The targets of two Trump media feuds met Wednesday night when popular Univision anchor Jorge Ramos appeared on Fox News' "Kelly File."

"What is it like to be caught in the cross hairs of a billionaire presidential frontrunner?" Kelly asked.

"Well, you know exactly how it feels," Ramos responded.

Ramos was kicked out of a Trump press conference in Iowa Tuesday but was eventually let back in.

"It happened with your colleagues at Fox News. He hates it when he's being confronted," Ramos said.

"He was just telling me things. And it was a very loud, shrill voice. And I said, 'What's going on over here?' And I just didn't think it was appropriate the way he behaved," Trump said on "The Hugh Hewitt Show."

"I have much bigger things to think about honestly. ... Roger Ailes is a special guy, he's a good friend of mine, and we just spoke two minutes ago. I mean, Roger Ailes is a great guy, and no, I have no problem," Trump said on the "Laura Ingraham Show."

But Trump may have a problem with GOP rival Jeb Bush, who said the front-runner should be challenged for putting out an immigration plan that is not conservative.

"Do it as a conservative for crying out loud... Go through these questions, and what you'll find is that this guy doesn't have a plan. He's appealing to people's angst and their anger," Bush said.

"I guess he's trying very hard because I used the term 'low energy.' He is a low-energy person by nature and that's OK," Trump said on Bloomberg.

"Now, don't get distracted by the flamboyant front-runner," Clinton said.

On Wednesday Clinton also struck a more conciliatory tone than she has in the past in addressing the controversy around her private email server.

"It clearly wasn't the best choice. I should have used two emails. One personal, one for work. And I take responsibility for that decision," Clinton said.

This is the kind of answer many top Democrats and donors have been looking for her to give for months.