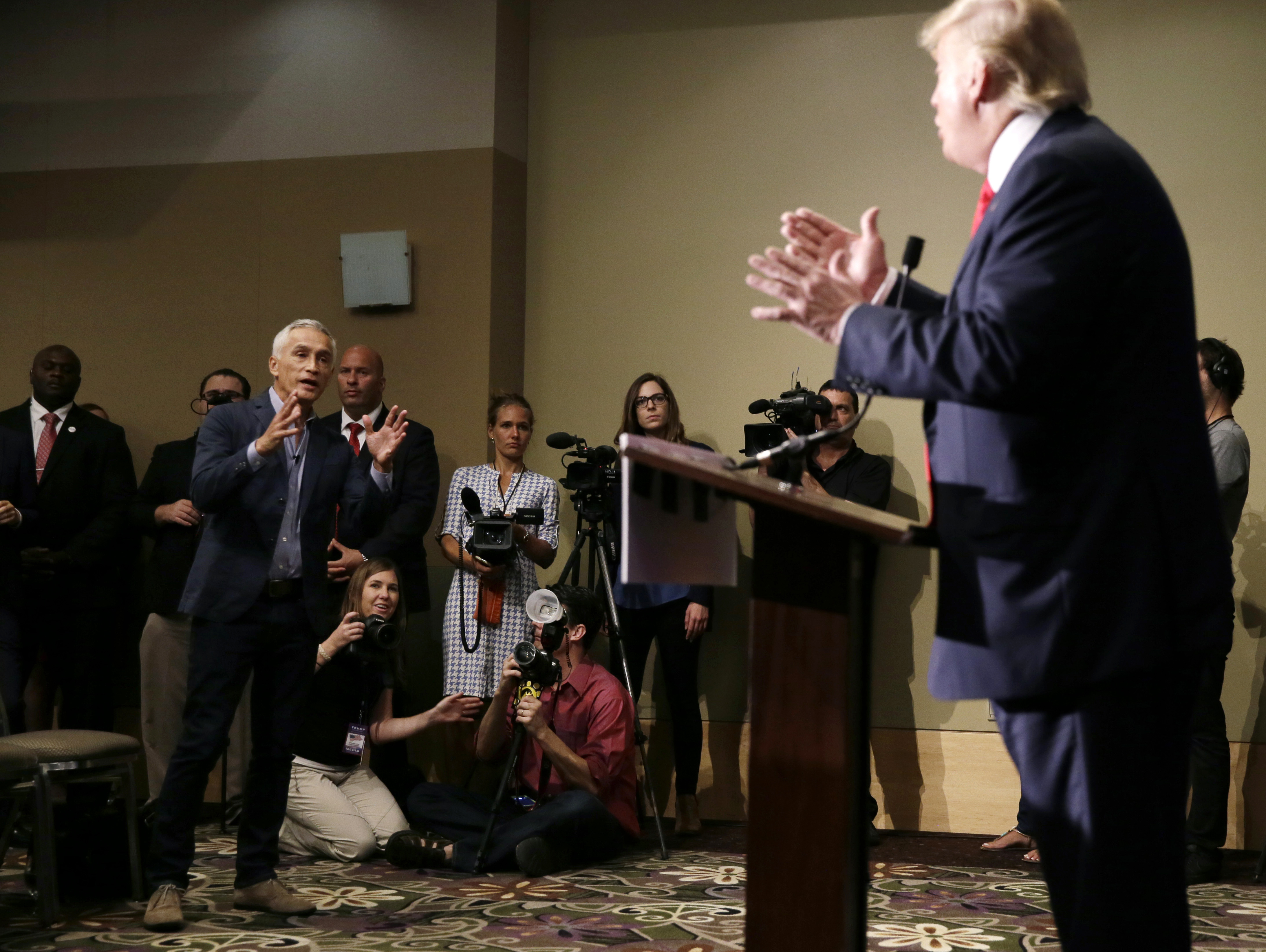 When Ramos tried to ask Donald Trump the first question, Trump tried to shut him down, and eventually tossed him from the press conference. Trump was then asked by other reporters whether it was appropriate to rebuke Ramos like that, Trump said "certainly he was not chosen" to ask the first question. "He just stands up and starts screaming," he said. "If he wanted to come back in, I'd love to have him. ... He's obviously a very emotional person." Ramos was allowed to return later.

But Ramos, who appeared on "CBS This Morning" early Wednesday, refuted Trump's account.

"I waited for my turn, I asked the question, he didn't like the question, and he was clearly in control of that press room," Ramos told CBS News. "I've been a journalist for more than 30 years, I've been all over the world, and I've never been thrown out of any press conference from any interview."

Asked if he was in Iowa to pick a fight with the immigration hawk, Ramos said that "no, I was there to ask questions -- that's our job as journalists."

The National Association of Hispanic Journalists also condemned Trump for tossing Ramos, protesting that "Mr. Ramos was doing what journalists have done for decades - asking questions!"

The exchange with Ramos didn't seem to faze Trump supporters attending his rally following his press conference. Before Trump took the stage, one animated Trump fan leaned over to his friend to say that Trump had just "kicked out Hispanic journalist." His friend laughed.

"We need our own people to be taken care of for a change," Horton said. The great grandmother of four sported a Trump t-short layered over her pink and white collared shirt, topped with a sparkly Fourth of July-style boa. She arrived at the Grand River Center at 10:30 a.m. to ensure she'd get a place inside for the rally. Her early arrival made her the first person in line.

Horton wasn't alone in admiring Trump for his straight talk in Iowa.

"He is a damn good showman," explained Frank Kennedy, an Iowan artist who did a painting of Trump that he carried around with him at the rally.

Trump's inflammatory comments come on the heels of another brewing media feud -- this time, with conservative-leaning cable outlet Fox News.

Trump, who resumed his attacks against Fox News anchor Megyn Kelly earlier this week on Twitter by criticizing her first show after returning from vacation, and he also quoted a series of tweets insulting Kelly.

Fox News chairman Roger Ailes called Trump's comments "crude and irresponsible" on Tuesday. He added that "Donald Trump rarely apologizes, although in this case, he should."

At the news conference in Dubuque late Tuesday, when CBS News' Chip Reid asked Trump if he would apologize to Kelly, he refused.

"She actually should be apologizing to me," Trump said, adding that her attitude at the debate was "totally inappropriate."

Trump, who is leading in national Republican polls, has drawn considerable support from many influential figures in the conservative base. One potential supporter - according to Trump, anyway - was Anthony Scaramucci, Skybridge Capital founder and financial backer of Trump's primary opponent Wisconsin Gov. Scott Walker. Scaramucci says that's not the case.

The Wall Street Journal reported Monday that the top Walker fundraiser met with Trump to discuss the possibility of leaving the Wisconsin governor's campaign, hours after Scaramucci had lambasted Trump as "a Democratic plant" for Hillary Clinton in an appearance on the Fox Business Network.

Trump was asked about the meeting during the presser, and he said of Scaramucci, "He said some negative things about me - then he comes up to my office two or three hours later, he wants to be part of my campaign," and added, "He wanted to leave Walker to support me."

Scaramucci, however, vehemently disagreed with Trump's comments, posting his reaction on Twitter.

The hedge fund founder said that it was, in fact, Trump's office who asked to meet with Scaramucci Monday.

On Sunday, Trump appeared on CBS' "Face the Nation" and criticized "hedge fund guys," saying they're "getting away with murder."