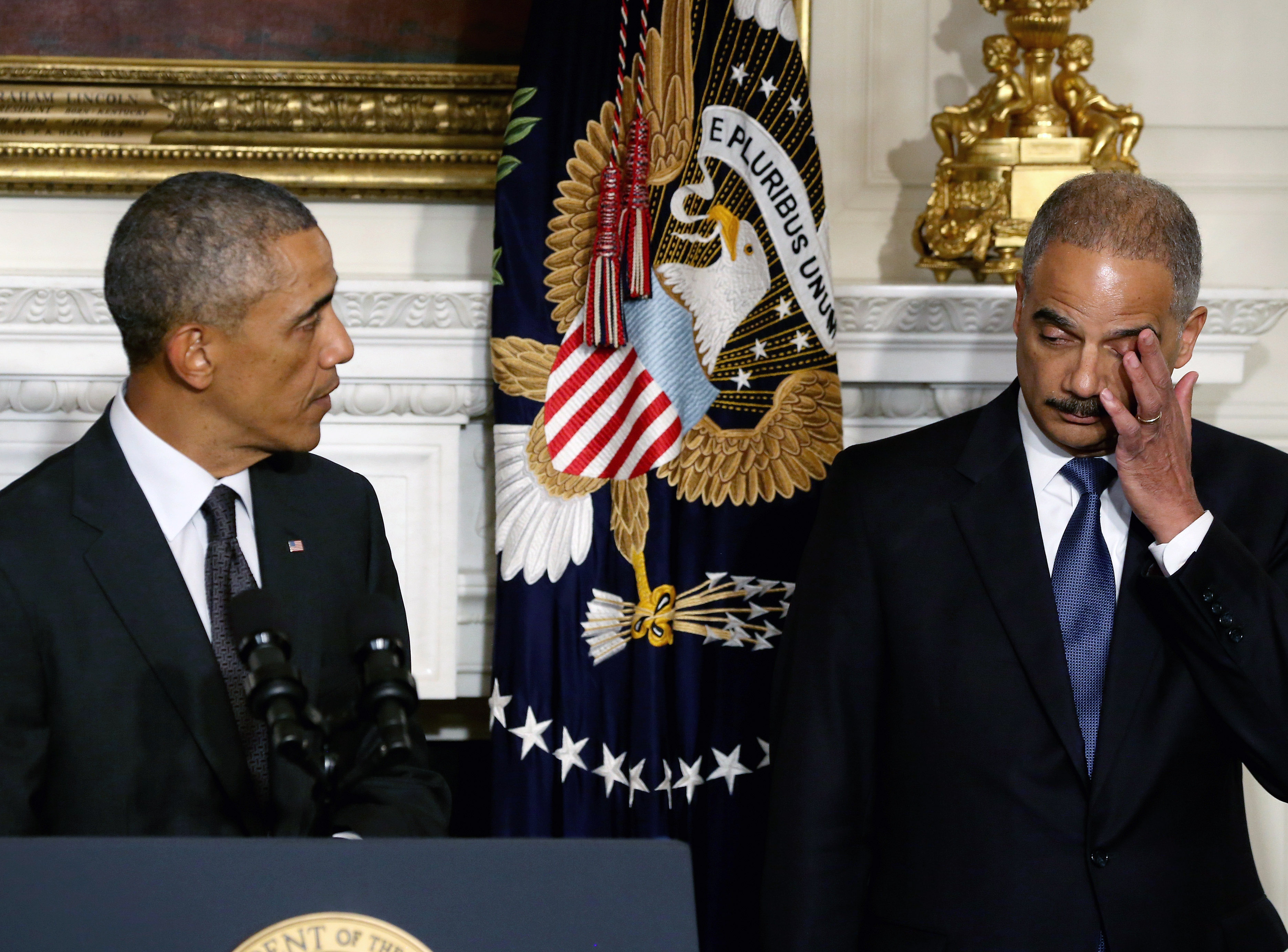 Attorney General Eric Holder and Deputy Attorney General James Cole are both stepping down from their roles at the Justice Department soon, leaving a power vacuum at an agency that has its hand in just about every ongoing national controversy and that plays a central role in the implementation of President Obama's agenda.

The top three jobs at the department will soon be vacant, and only four of the 11 assistant attorneys general have been confirmed. This presents Mr. Obama with both challenges and opportunities.

This isn't the first time the Justice department has faced a power vacuum. There was a similarly high level of vacancies in the agency in 2007, after the resignation of former Attorney General Alberto Gonzalez and the retirement of former Deputy Attorney General Paul McNulty. The department's inspector general also reported at the time that just three of the 11 assistant attorney general positions were filled.

"It's always a challenge because the senior-level positions require Senate confirmation, and it can be difficult to move these nominees through a confirmation vote," Thomas Dupree, who served as deputy assistant attorney general during the George W. Bush administration, told CBS News. At the same time, he said, "It's an opportunity for [the president] to identify new people who will bring new energy and new ideas into the administration."

Robert Raben, an assistant attorney general in the Clinton administration, said that with multiple high-level positions open, Mr. Obama and his team have the chance to "to look at the whole matrix" of skills and experience needed to lead the Justice Department and find people tailored to meet each need.

Specifically, he noted that the Justice Department should have leaders with national security expertise, prosecutorial experience, and a healthy respect for the department's governmental oversight responsibilities.

"One pick doesn't have to be excellent at all three," Raben said.

The department's oversight responsibilities could be more important if Republicans win control of the Senate this November. Conservatives in Congress in recent years took the Justice Department to task over its role in the "Fast and Furious" gun walking scandal, as well as the investigations into IRS misconduct.

Justice Department officials "have to understand... the Congress is speaking for the American people, and you have to be responsive" to their inquiries, Raben said.

While factors like the midterms may influence Mr. Obama's nominations, Dupree said it's unlikely that the department's agenda will change significantly under its new leadership.

Holder was most successful in his work on civil rights issues. He reformed prison sentencing guidelines to reduce racial disparity in the justice system and sought alternatives to incarceration. His role in the administration's decision to stop defending the Defense of Marriage Act led to a victory at the Supreme Court that has paved the way for scores of lawsuits around the country that have toppled laws limiting same-sex marriages.

But there are unfinished battles, too. Holder enjoyed limited success in his efforts to begin trying terror suspects in the civil court system, but was unable to shift detainees out of the Guantanamo Bay prison facility for trial. He's also failed to come up with criminal charges against top officials at banks involved in the 2008 financial crisis, and mostly penalized them through historically large settlements.

And despite the agency's aggressive efforts to battle laws limiting voting rights across the country, there are several ongoing lawsuits that were sparked when the Supreme Court struck down a key part of the Voting Rights Act. Holder's successor will also finish overseeing the investigation into the death of 18-year-old Michael Brown in Ferguson, Missouri.

While the new attorney general sets the department's overall agenda, the deputy attorney general "traditionally has been sort of the chief operating officer... the guy or woman who makes sure the trains run on time and decisions are made," said William Yeomans, a 26-year Justice Department veteran who primarily served in the Civil Rights Division.

"You need to have the big picture leadership, and you need someone to execute the leadership positions," he said.

Cole ran day to day operations at the agency, but he was also the chief defender of the government's collection of Americans' phone data, and he was also charged with handling marijuana legalization issues once states began to pass legalization laws, according to the Washington Post.

"There are career people there who have been doing their jobs for a long time, and there are still a fair number of political appointees," Yeomans said. "It's not as if the Department will be adrift."

In some cases, the department is currently relying on the leadership of acting officials -- appointees serving in a role until Mr. Obama can nominate them (or someone else) for Senate confirmation.

Stuart Delery is currently the acting associate attorney general, the department's No. 3 spot. His predecessor Tony West recently left his position as to accept a job at Pepsi. Additionally, Vanita Gupta is now serving as the acting Assistant Attorney General for the Civil Rights Division. Mr. Obama is expected to nominate Gupta to be the division's permanent leader. Gupta has strong bipartisan support, which will be critical to fill this role.

The Civil Rights Division, which Holder has expanded and elevated in stature in order to more aggressively police racial discrimination in areas like housing and voting, has not had a confirmed leader for over a year.

Earlier, Mr. Obama nominated Debo Adegbile to head the division, but his nomination was blocked largely because conservatives objected to his involvement in an appeal in the high-profile case of Mumia Abu-Jamal.

Yeomans called Adegbile's rejection "one of the Senate's darker moments" but expressed optimism about Gupta's nomination.

"Her background is particularly important in this point of our history," he said. "She's done a lot of work on criminal justice issues and mass incarceration. With things like the Ferguson investigation pending... I think she's a great pick."

While Mr. Obama has said he's waiting until after the Nov. 4 elections to nominate Holder's replacement, Dupree noted that the president shouldn't wait too long.

"The amount of time these officials can spend in the position shrinks on a day-to-day basis," he noted. "There's a hard end-date of January 2017."

This article was corrected to note that the Civil Rights Division, not the Civil Division, has been without a confirmed leader for over a year.